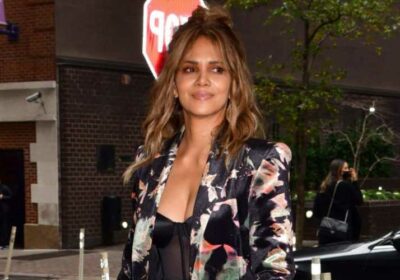 Halle Berry started off the week right with not one, not two, but three outfits while stepping out in New York City all within the same day.

Early in the day, the actress stepped out in a first look, which consisted of a multi-colored velvet pant suit that she paired with a black sheer, corseted bustier underneath. The boot-cut trousers partially covered her black, peep-toe platforms, and Berry completed the look with a half-up, half-down messy bun. At some point, the actress changed into her second look: another pant suit that she accompanied with a matching coat. The black-and-white checkered suit had tailored pants and a belted blazer, which was paired with a matching color-blocked coat that she wore over her shoulders. She paired it with black, pointy-toe patent-leather heels with rhinestone detailing. At night, Berry stepped out once again, this time with her boyfriend, musician Van Hunt. For the Manhattan date night, Berry opted for a black-and-gold sheer blouse, slate-colored silk joggers, black booties, and a matching silk overcoat. Last week, the star celebrated the release of her film Bruised, which marks the actress' directorial debut. Berry also stars as an MMA fighter who gets back in the ring after a years-long hiatus following a devastating loss. She recently opened up to Women's Health about training for the role, which included learning five versions of mixed martial arts: Brazilian jiu-jitsu, judo, Muay Thai, tae kwon do, and kickboxing

"I'm at my best when I have to work hard and when I'm facing challenges," she told the publication. "To be the age I am and push my body to its limits reminded me that age is just a number. We can control how we define ourselves, and I've never been healthier and felt stronger. This movie helped me realize that."