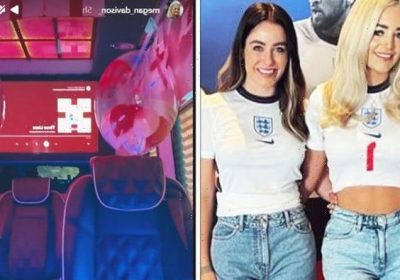 England WAGs are already out in full force ahead of tonight’s Euro 2020 match against Denmark. Hours before the semi-final, the partners of two England players Harry Maguire, 28, and Jordan Pickford, 27, took to social media to reveal that they were travelling to Wembley Stadium in style.

On my way @pickford1

Not ones to shy away from making an entrance, Megan Davison, 25, and Fern Hawkins, 26, took to Instagram to document their journey to London.

In view of her 56,700 Instagram followers, Jordan’s wife revealed that she was travelling in an extravagantly decorated party bus.

Showing off the huge space which had been lit up with red lights, the star panned around the vehicle which had been decorated appropriately with England balloons, cushions and cowboy hats with St George’s flag on.

Featuring football anthem Three Lions playing through the sound system, Megan enjoyed the long trip from Cheshire to London to support her beau and his team.

Making a stop before getting underway with the journey, Meghan picked up close friend Fern, who is engaged to Jordan’s teammate Harry.

“On the way for my princess @_fernhawkins Wembley here we come,” she captioned the short clip.

In the next snap Meghan showed off red and white balloons with her spouse’s last name on as well as the England football logo.

“On my way @pickford1,” Megan tagged the picture.

Once onboard the party bus, Fern was also quick to upload a short video to Instagram, voicing her support for the England team.

“Come on the boys,” she wrote before tagging both Jordan and Harry alongside an emoji of the England flag.

Uploading a sweet snap, Fern struggled to hold an enormous bouquet of pink and white flowers and was surrounded by pink heart-shaped balloons.

Fern penned: “Missing you so much @harrymaguire93 thank you for the most beautiful flowers. Happy 10 years my love.”

In April 2019 the couple welcomed their first daughter Lillie Saint Maguire, before having Piper Rose Maguire last May.

Despite not travelling on the party bus, Harry’s sister Daisy showed her support for her brother by taking snaps from inside the Wembley Hilton Hotel.

The blonde uploaded a snap to her stories of herself enjoying breakfast in bed.

Complete with a full English and a plate of fruit, Daisy captioned the picture: “Big day ahead.”

The WAG’s journey comes despite the England line-up having yet to be announced.

England vs Denmark kicks off at 8pm today on BBC One.

Millions are expected to tune in to the semi-final match as well as 60,000 attending Wembley Stadium.