Harry Styles & Olivia Wilde Step Out For A Date Night In New York Amid Split Rumors! 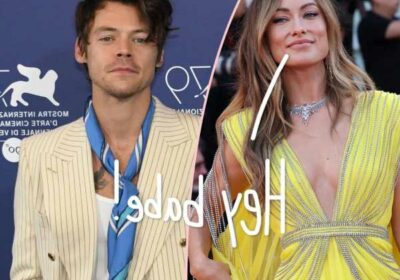 According to photos obtained by TMZ, the couple stepped out for a date night together on Friday. Olivia and Harry kept things casual as they dined at a Mexican restaurant called Truck in Bedford, New York, with the 28-year-old singer sporting an Adidas tracksuit and the 38-year-old filmmaker donning just a simple white tee. You can ch-ch-check out the snapshots HERE.

This sighting comes after break up rumors started circulating when people noticed that the duo barely interacted at the Venice Film Festival earlier this month. We are talking about not a single picture from the red carpet of them even touching or standing next to each other here! And fueling speculation, when Don’t Worry Darling received a 4-minute standing ovation, Harry never congratulated or hugged her during the moment and opted to lock lips with his co-star Nick Kroll instead. So it definitely seemed like there was trouble in paradise between Harry and Olivia after that awkward event!

However, the tension might have been due to the ongoing drama between Olivia and Florence Pugh. Fans started to assume there was an ongoing feud between the two women when the Marvel star was not sharing any promotional material for the film nor liked any of Olivia’s posts about it. Speculation has only continued to run rampant, especially after Florence cut her press appearances down to just the Venice Film Festival.

It’s unclear what caused the issues between the stars, but a source for Vulture on Friday claimed Florence was unhappy when “Olivia and Harry would just disappear” while working on the movie. The situation only escalated to the point where they got into a “screaming match” in January 2021 – around when Olivia attended a wedding with Harry. Things were so bad that Warner Bros then-chairman Toby Emmerich even had to step in as “referee.” Yikes! Then, after a “long negotiation process,” it sounds like Florence promised not to say anything negative and got out of her press appearances.

Of course, the drama did not end there as Shia LaBeouf slammed Olivia’s claim that she fired him from Don’t Worry Darling to protect Florence. He claimed that he had quit since they weren’t given enough time to rehearse – even backing up his stance with a video and screenshots of his conversations with the House alum. Yeesh. It is no wonder things were a tad tense at the festival between Harry and Olivia with all this drama surrounding them!

Nevertheless, the lovebirds are seemingly trying to bury those split rumors! Their dinner date was not the only time Harry and Olivia were seen together this week. The Booksmart director also came to support her beau while he finished his 15-night residency at Madison Square Garden in New York City on Wednesday. They later were spotted making out in pics obtained by Dailymail.com.

It might be safe to say that Harry and Olivia are still doing fine, y’all! Reactions, Perezcious readers? Let us know in the comments below.