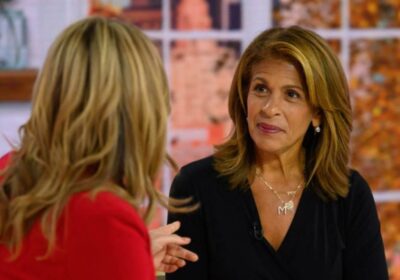 Following a very sad and challenging week, Hoda Kotb and Jenna Bush Hager brought some light-hearted jest to their Today show with a conversation about food.

On Friday, during a pre-recorded show, the co-hosts became very animated as they discussed burger toppings ahead of the Memorial Day weekend.

The pair butted heads as they couldn’t agree on anything. Hoda was left horrified when she asked Jenna whether she prefers dill or sweet pickles – and she opted for the latter.

“Sweet? Who does sweet?” she asked as her co-host exclaimed: “I do sweet!” and had a frustrated expression on her face.

Hoda immediately asked the audience to weigh in as Jenna defended herself.

Next up, was the question of mayo and while Jenna said: “No thank you,” Hoda revealed she needs a dash of sauce.

It was then Jenna’s turn to quiz Hoda as the mom-of-two revealed she likes her bun “soft and mushy” and straight out of the packet instead of toasted as Jenna prefers.

Hoda and Jenna had a big hamburger debate

The pair – who sported a whole host of bemused expressions during the interaction – argued but ultimately got to indulge in their perfect burger when it was placed in front of them on-air.

The clip was shared on Today with Hoda & Jenna‘s Instagram feed as fans then had their say too.

“Mustard and dill pickles for me,” wrote one, while another added: Chili, slaw, onions and mustard,” and a third commented: “How could you do sweet? Dill all the way.”

The exchange comes at the end of an upsetting week as the pair reported on the Texas school shooting.

The news was certainly not forgotten and fans also referred to it in their comments, but pointed out that Friday’s show was likely recorded before the tragic event.