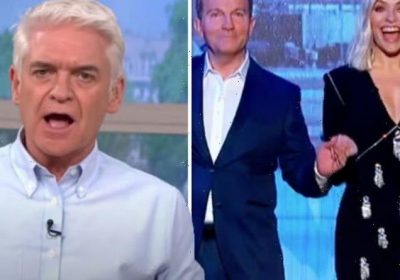 Holly Willoughby says her family is ‘divided’ over Euro final

This Morning presenter Holly Willoughby’s latest TV move with Bradley Walsh, 61, has sparked speculation from her fans that her collaborative relationship with Phillip Schofield, 59, could be getting pushed aside. It comes after Holly announced she will be working with The Chase host once again on a brand new series of Take Off on the BBC.

The ITV regular took to Instagram to share the news in view of her 7.3 million followers today.

She penned alongside a teaser clip of the show: “Morning! How are you?… just got sent this through of my new show with @bradderswalsh it’s called Take off… it starts this Saturday at 6pm on @bbc …

“So much fun was had filming this one and working with a total genius/wally.”

However, Holly’s exciting announcement has sparked concern amongst some of her Instagram followers, as they worried for the future of her on-screen partnership with Phillip.

One person wrote: “Noooo you’ve dumped Philip!!! Weird seeing you host with someone else!!!”

Another added: “Should of been with phil.”(sic)

A fourth commented: “It looks fab! @hollywilloughby ! Although picturing you present with someone else is like watching @antanddec stand in the wrong order or with other people lol.”

A fifth penned: “Wow holly working without Phillip! This will be strange! Hope I win a holiday.”

Others disagreed and defended the pair’s decision to work together.

One fan hit back: “If people don’t like them or criticising don’t watch it !!! Don’t complain , it’s good them 2 together ! Holly is lovely meet her a couple of times.”

Another agreed: “Looks fun , love both of you.”

A third replied: “Oh something new with braderrs cant wait.”

Holly and Bradley previously teamed up for a one-off Christmas special of the programme in December 2019.

Viewers who tuned in at the time were treated to a festive extravaganza, where audience members were given the chance to win a Christmas trip to Lapland.

This time around, fans will watch members of the public compete to win seats on a plane that will transport them to a dream holiday destination.

This week’s winners are set to enjoy a stateside holiday to Los Angeles and Las Vegas.

BBC’s Entertainment Commissioner Kate Phillips said of the new series: “I’m so pleased that Brad and Holly will be returning to BBC One with more Take Off.

“With memorable, play along games and our hosts’ infectious energy, Take Off will give everyone a lift.”

Bradley and Holly added: “We’re really excited to be working together again on Take Off.

“We had so much fun last time and can’t wait to give more families the chance to win an amazing holiday.”