You’ve been there before: You’re scrolling through your Instagram feed when you see your favorite celeb post about their favorite new product — a face serum, vitamins that will make your skin brighter, or a specialty food service. You can’t help but want to be like the stars, but are the products worth it? In Elite Daily’s I Tried series, we put it all to the test. We’re trying those products as well as celebrities’ health and wellness tips, recipes, and life hacks. We’ll do the leg work and tell you what living like your fave star is really like.

As much as we’d like to think certain celebrities stay super-fit thanks to good genes or plastic surgery, more often than not, it takes hard work. Intense workout regimens are pretty standard for those in the spotlight. While many stars keep their fitness secrets to themselves, some are kind enough to share their tips with the rest of the world, which is exactly how I came to try Nicole Scherzinger’s at-home ab workout.

Scherzinger’s routine is super straightforward and easy to do from home — or just about anywhere. (Yep, that means no excuses.) Plus, the Pussycat Dolls frontwoman posted her workout on Instagram, meaning fans can view it any time on their smartphones or laptop.

The video, which she posted on March 28, was inspired by personal trainer Glenn Higgins (according to her IG caption) and includes five different, hard-hitting workout moves, repeated until you’ve done each 30-second set a total of four times. Even before trying it myself, I knew the short routine would pack a punch. Here’s how I fared.

Make sure you have water by your side throughout this workout, because even though it only takes 15 minutes to get through all four cycles of the five moves, it’ll make you thirsty. Here I am before hitting the ground and becoming a sweaty mess: 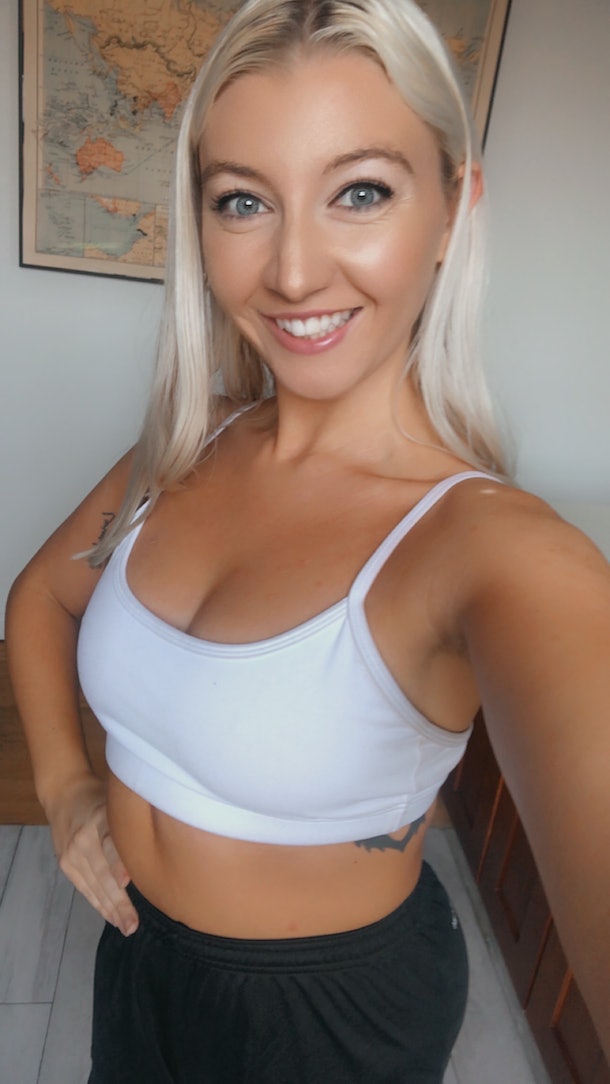 Scherzinger starts off her ab workout with a set of classic bicycles, pushing through for 30 seconds, then taking a one-minute break. A bicycle crunch involves lying flat on the floor and alternating bringing each leg up toward your chest while simultaneously extending the other one straight. I might not have looked as graceful as Scherzinger did while cycling it out, but I sure felt the burn. At this rate, I’ll have abs like hers in no time, right?

The only bad workout is the one you don’t do. New decade, new week, new mindset, endless possibilities! 💪🏽✨🤸🏽‍♀️💞 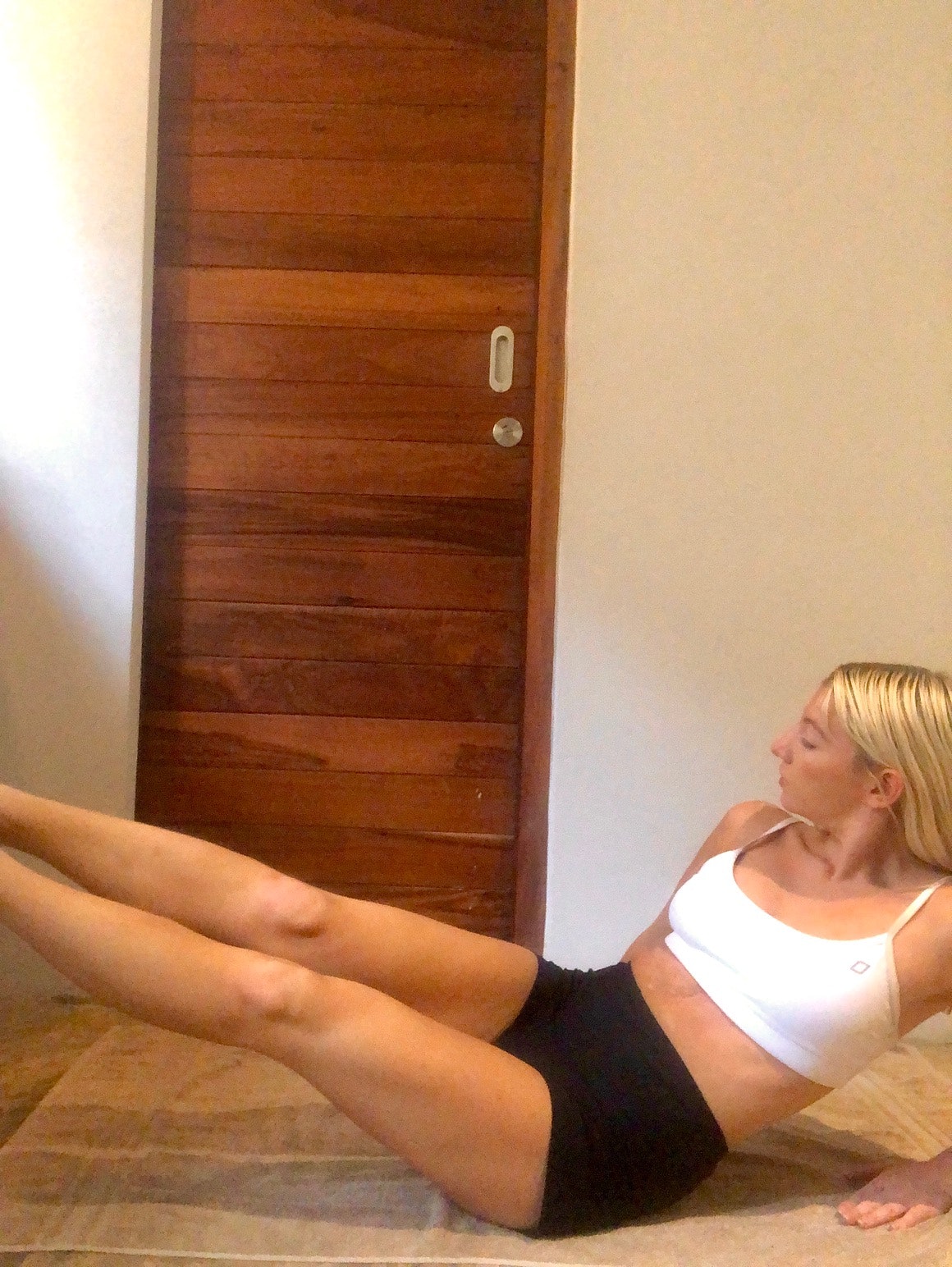 These were no joke. This move calls for strong middle core strength, as it required me to bring my knees up to my chest and then extend my legs straight out, all while alternating sides to target my side obliques. It required a lot of stamina on my part to finish the full 30 seconds without taking a break, but I did make it… barely. 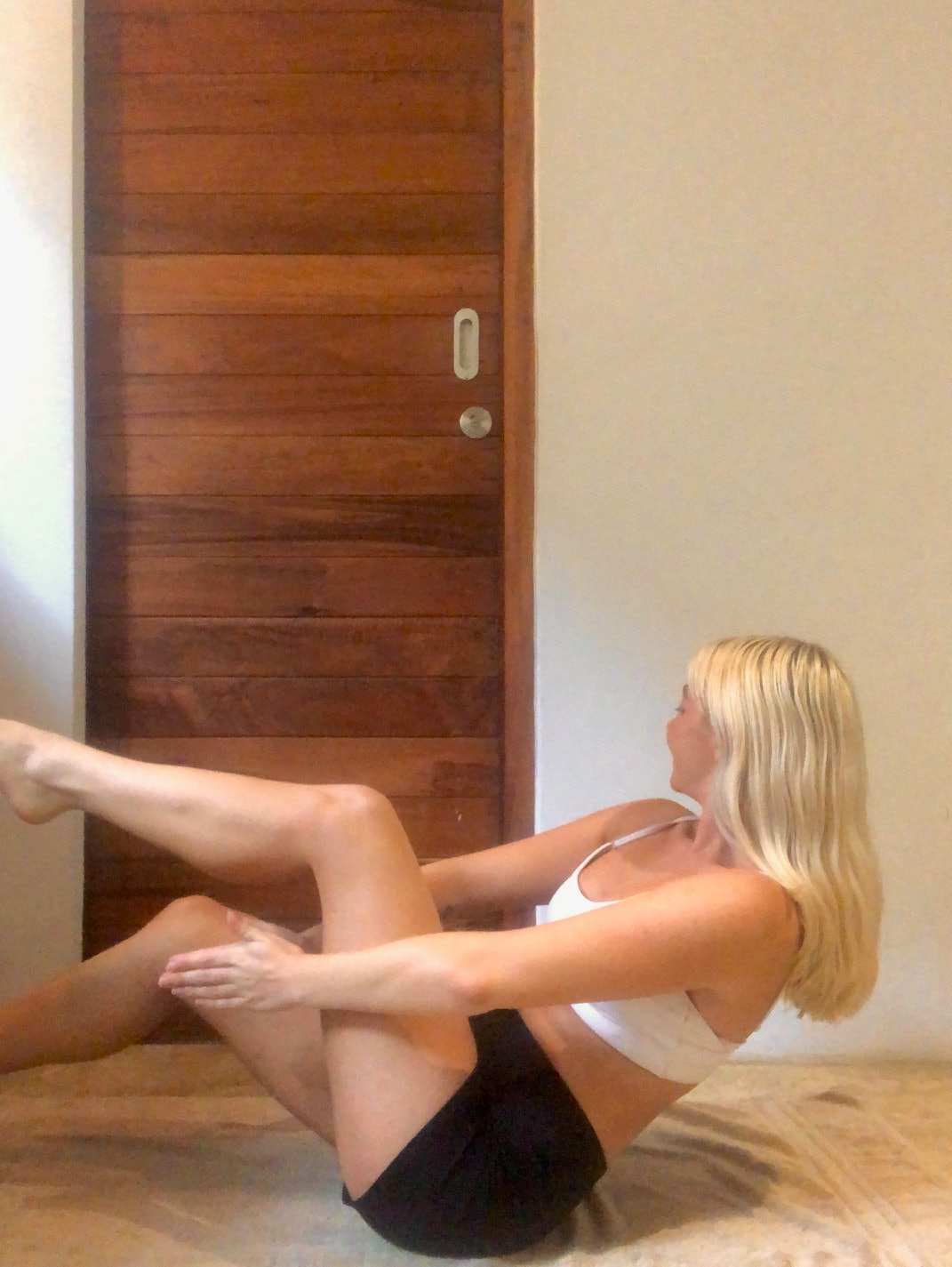 The clap crunch is called exactly that for a reason. Scherzinger’s tutorial shows her crunching up and clapping her hands under each knee before then crunching up to clap hands with her partner on the opposite side of her. While those at home can definitely do this workout with a buddy like Scherzinger did, I did the workout solo so I just clapped my hands together instead.

This move was very focused on the partner aspect of Scherzinger’s workout, so I definitely had to improvise. In her video, Scherzinger places her hands on partner’s shoulders as he planks, and she hops back and forth over his back. These hops left me completely out of breath and reaching frantically for my water. For those doing this move solo like myself, I would suggest finding an item to put under you to motivate you to jump higher.

Speaking of motivation, I pumped up the tunes for the entirety of my workout, which definitely helped keep my energy up. Per my editor’s recommendation, I blasted some throwback Pussycat Dolls bops like "When I Grow Up" and "Don’t Cha" for extra inspo. 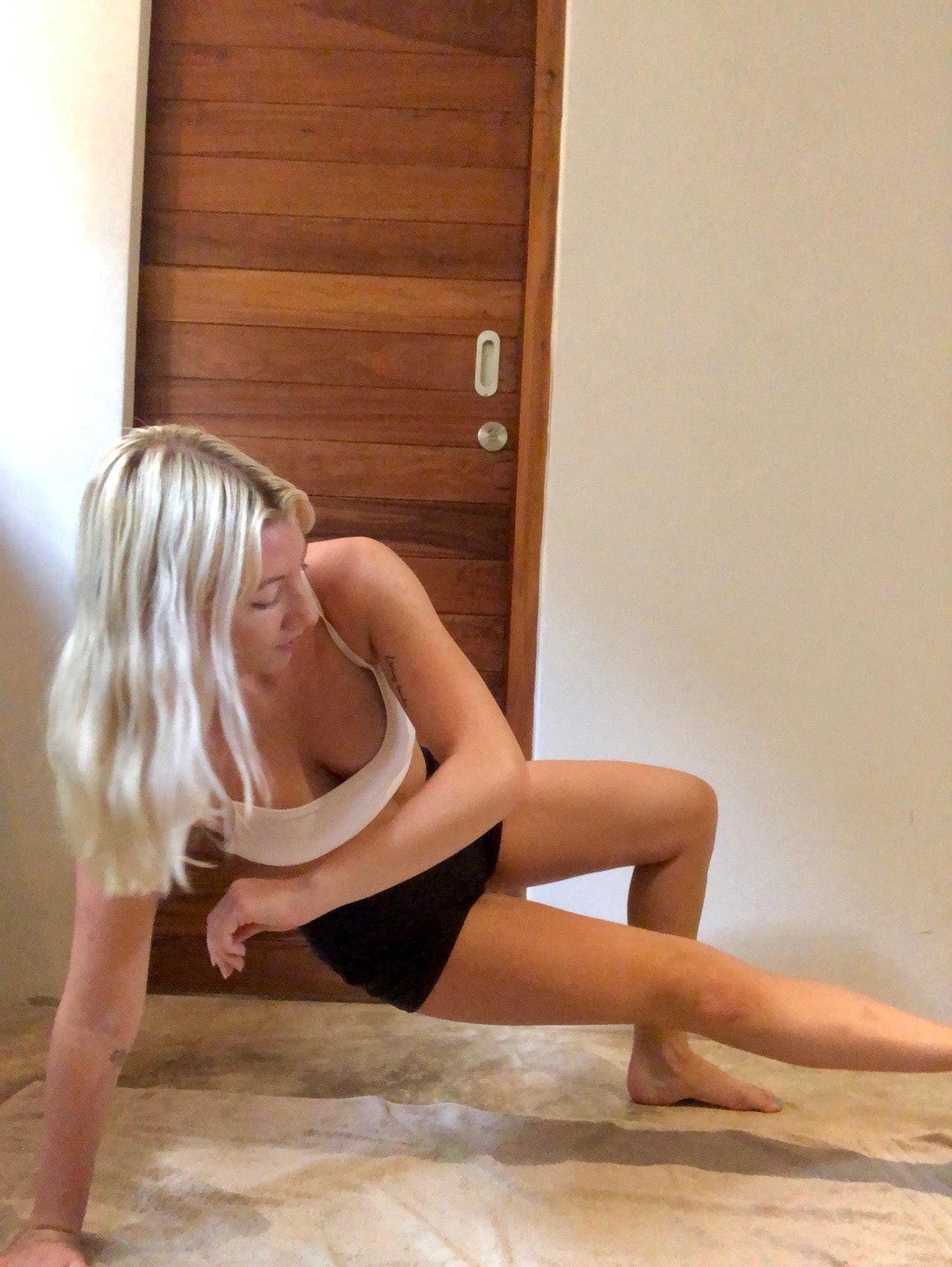 This was by far the hardest move Scherzinger included in her ab workout. Her "kick through" exercise requires you to use some serious body strength and keep just one hand and leg on the ground while extending the two other limbs. You then alternate sides, quickly swapping out your supporting leg and arm with the opposite, which requires the use of some serious core strength. For me, this was easier said than done. I managed to pull about 15 seconds of these together before collapsing on the ground.

Yep, that’s just one round of Scherzinger’s workout. She repeats these moves three more times, making for a circuit of four. While I had a firmer grasp on how to actually do the moves each circuit, they did become more difficult as my muscles became fatigued and I lost stamina — which means the workout was working, right? 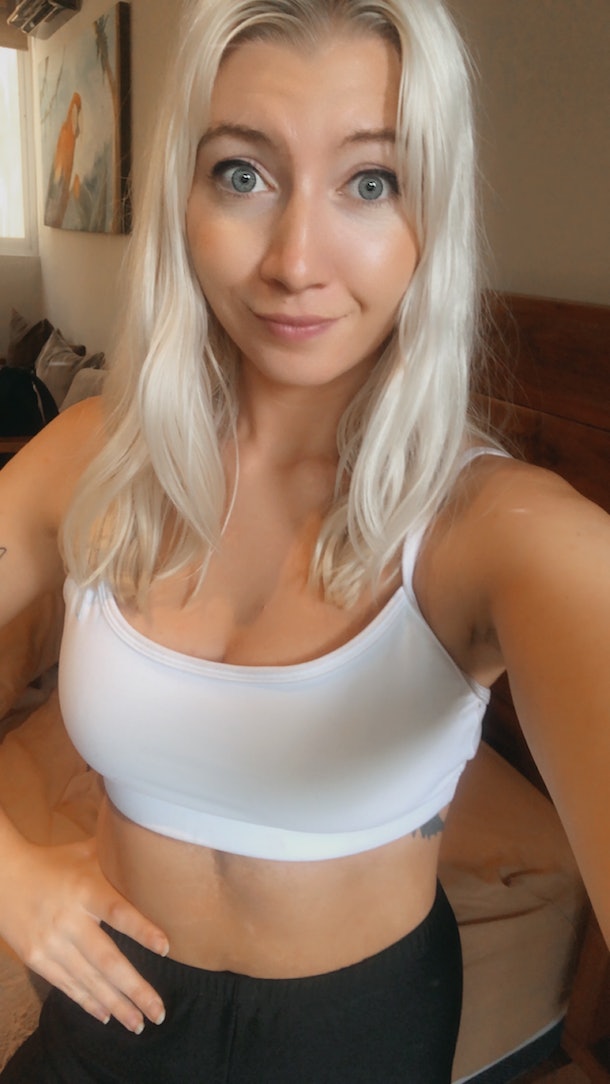 On a difficulty level scale of one to 10, I’d give Scherzinger’s ab workout a solid 7.5. Was it the hardest workout on the internet? Not quite. But as someone who had been slacking the past month on her daily workouts, I definitely felt the burn.

This workout is probably good for someone who doesn’t have much time to do a full hour-long workout because it fits a lot of movement into just 15 minutes. For this reason, I’d try these moves again, especially during my busier weeks.

Finally, seeing as Scherzinger has said in the past that she follows up hard workouts by eating pasta, I took a page out of her book and chowed down on some spaghetti after completing all four cycles. As much as "Buttons" was a solid workout anthem, I might have to *actually* loosen mine if I keep up this post-workout pasta routine.