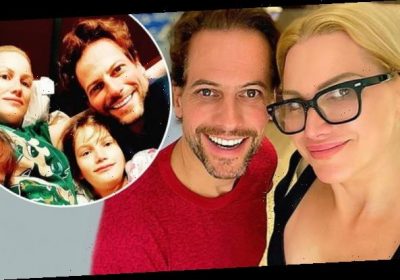 ‘I should have been more careful with my words’: Ioan Gruffudd’s estranged wife Alice Evans apologises for claiming their daughters ‘cry every day’ amid ongoing divorce drama

Ioan Gruffudd’s estranged wife Alice Evans has apologised for claiming their daughters ‘cry every day’ amid their ongoing divorce drama.

The actress, 49, took to Instagram on Monday to admit she ‘should have been more careful with my words’ about her children Ella, 11 and Elsie, seven, after accusing her ex, 47, of ‘abandonment’ after he ‘walked out’ on them in January.

A hopeful Alice joked her eldest has already ‘worked out that she can get more deliveries by going back between two abodes’ as she thanked her fans for their support following her public split. 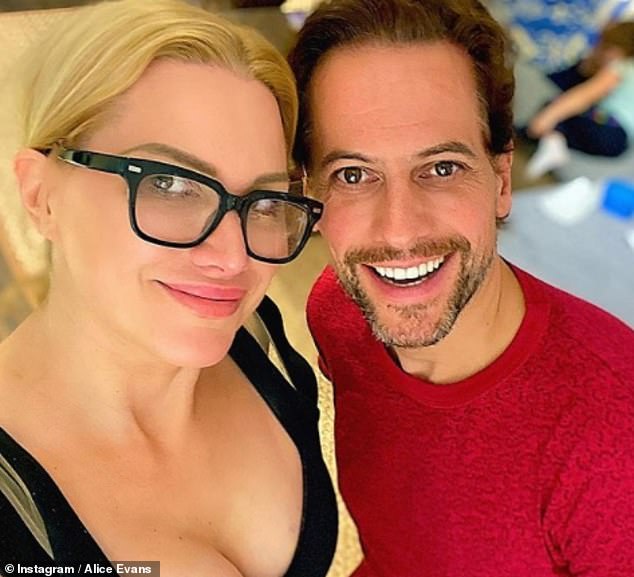 ‘They’re doing better than I would’ve imagined’: Ioan Gruffudd’s estranged wife has apologised for claiming their daughters ‘cry every day’ amid their divorce (pictured last year)

The screen star wrote: ‘I can’t find where I said this but I’m sure I did, and I should have been more careful with my words. They cry a lot, but kids tend to anyway, and ‘they cry every day’ is definitely hyperbole! I’m sorry.

‘They’re doing much better than I would have imagined, to be honest. Just that there are certain discussions about the future (near and far) that come up that make them sad. And as yet, I don’t have any answers.

‘But Ella has already worked out that she can get a lot more Ubereats deliveries by going back and forth between two abodes. 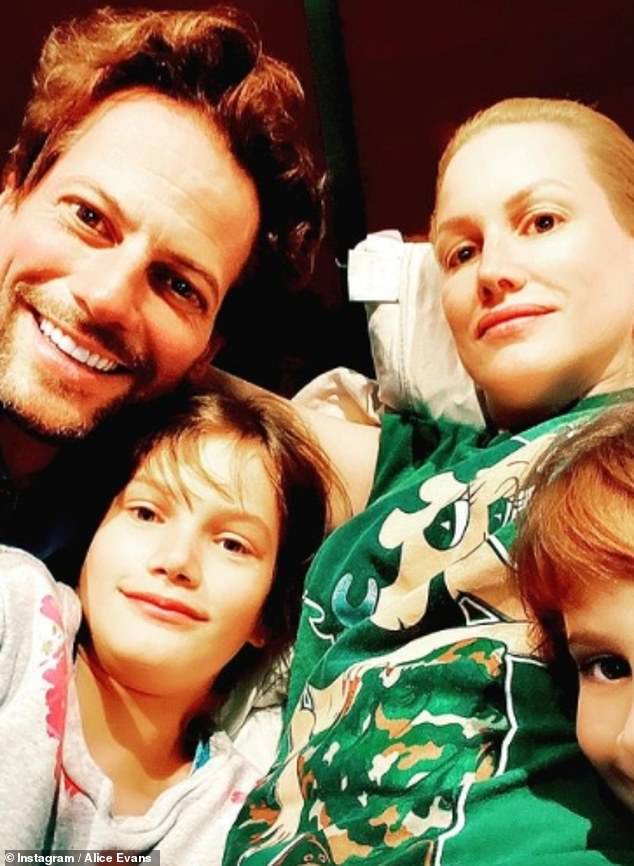 ‘I’m sorry’: Actress Alice Evans, 49, took to Instagram on Monday to admit she ‘should have been more careful with my words’ about her children Ella, 11 and Elsie, seven (pictured in 2018) 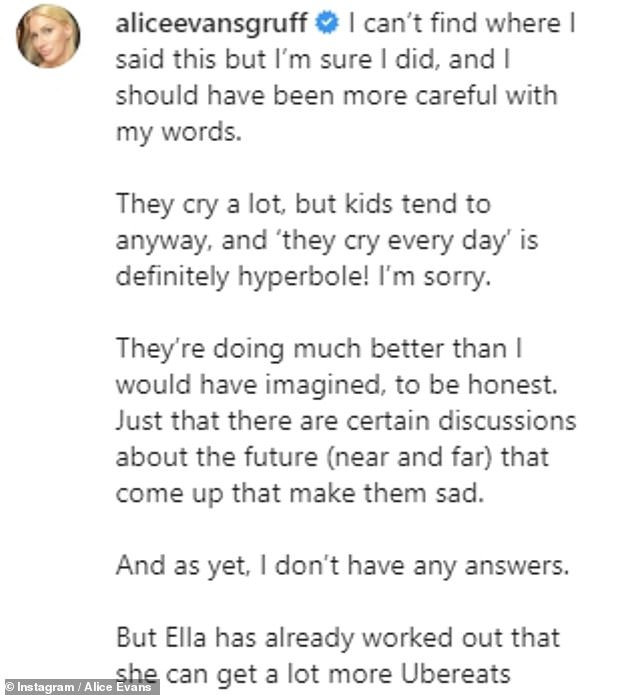 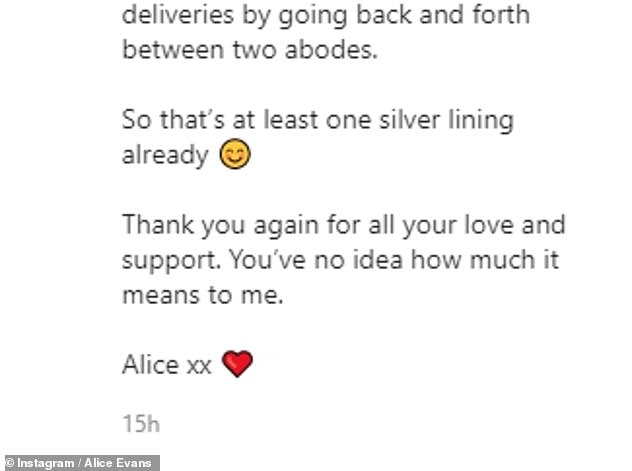 ‘That’s at least one silver lining already’: A hopeful Alice joked her eldest has already ‘worked out that she can get more deliveries by going back between two abodes’

‘So that’s at least one silver lining already. Thank you again for all your love and support. You’ve no idea how much it means to me. Alice xx ❤️.’ (sic)

Back in January, Alice revealed she and the actor they were breaking up after 20 years in a shock Twitter statement and claimed he ‘mentally tortured’ her.

The thespian has been taking to social media regularly to update fans on the split and, in a recent post, shared a picture of an columnist article on her page. 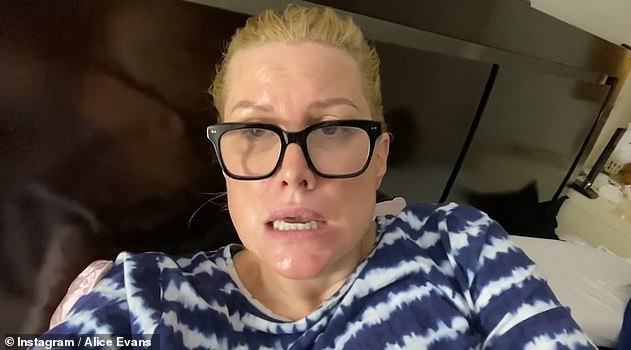 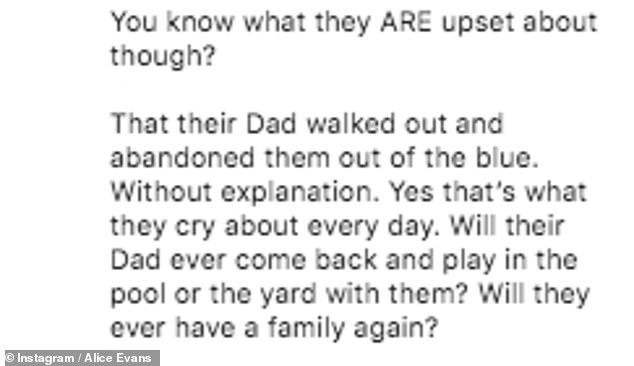 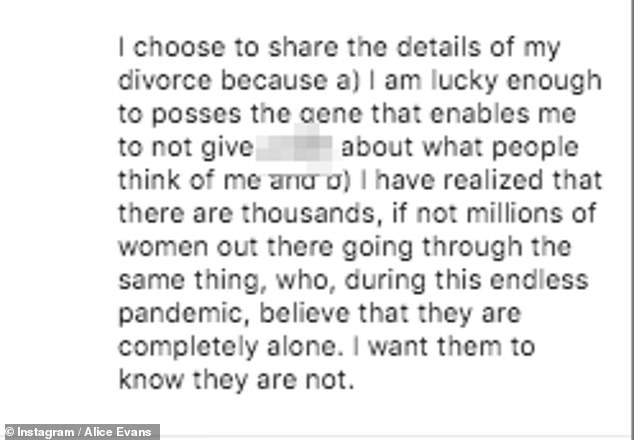 ‘Their dad abandoned them’: Back in January, Alice revealed she and the actor they were breaking up after 20 years in a shock Twitter statement and claimed he ‘mentally tortured’ her

The piece slammed her for opening up about her painful break-up from Ioan so publicly and commented on how it could affect her children in the years to come.

Hitting back, Alice said her daughters have no idea about her and Ioan’s public profile and ‘probably never will’.

She penned: ‘You know what they ARE upset about though? That their Dad walked out and abandoned them out of the blue. Without explanation.

‘Yes that’s what they cry about every day. Will their Dad ever come back and play in the pool or the yard with them? Will they ever have a family again?’

Explaining why she has been so vocal about her split, she continued: ‘I choose to share the details of my divorce because a) I am lucky enough to possess the gene that enables me to not give a s**t about what people think of me and b) I have realised that there are thousands, if not millions of women out there going through the same thing, who, during this endless pandemic, believe that they are completely alone. I want them to know they are not. 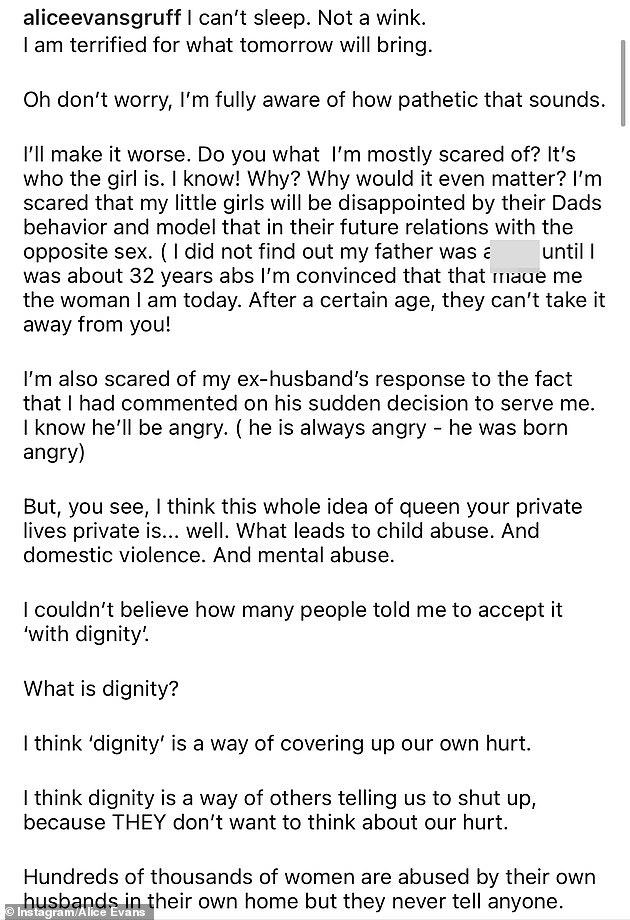 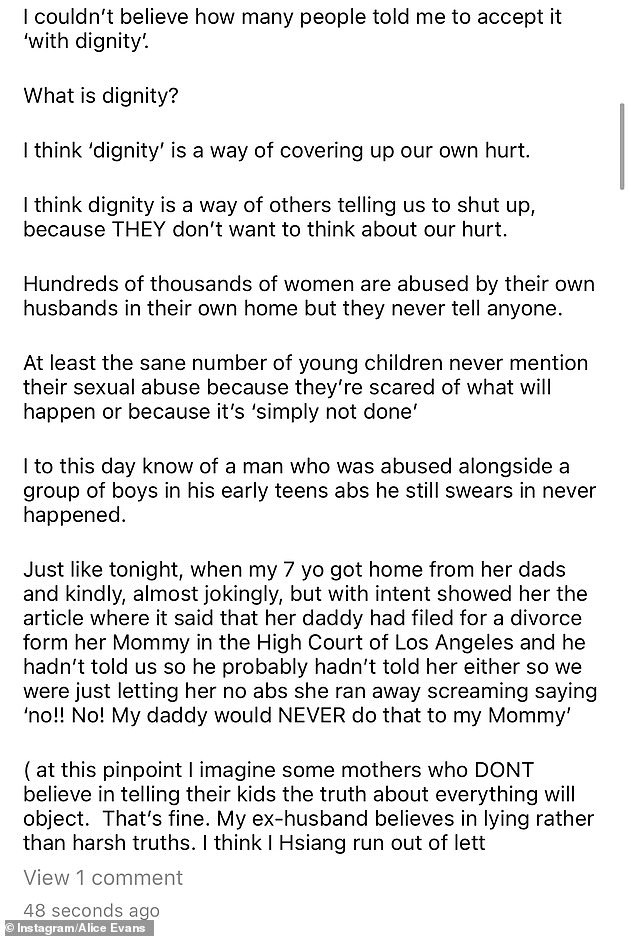 Fury: Last week, the thespian accused the Fantastic Four star of ‘winding the s**t up me’ as she posted a vitriolic video about their ‘collaborative divorce’ talks

Last week, Alice accused Ioan of ‘winding the s**t up me’ as she posted a vitriolic video about their ‘collaborative divorce’ talks.

She said: ‘I have been served with a petition for divorce and it’s came out of the blue and I won’t cry. But we’ve been 20 years together, we have two amazing kids. I don’t know why.

‘At the moment we’re doing something called collaborative divorce which is somewhere between a really kind way of doing divorce and a phenomenal scam.

‘Because in one way it’s “okay, let’s hear what you would want and take it to the court afterwards” and in another way it’s like, people in the acting business will know when an agent says to you “we just can’t find you the roles”.

‘It’s a bit like, I’d like my daughter to stay with me on Saturday nights, “it’s just not within our possibilities”.

The TV and film star then insisted he misled her with collaborative divorce, adding: ‘And then I read nothing is binding in collaborative, absolutely nothing.

‘So if I want my daughter to stay one more night in my house, the court hasn’t said anything so I can do it. So my husband is winding the s**t up me, saying what he says is the law, well we haven’t got to the law yet.

‘Lawyers aren’t the law. Lawyers are there to f*** the law. That’s what I always said. Anyway I may have some more thoughts later

Ioan’s divorce papers cite irreconcilable differences as the reason behind his split from his wife of 14 years, Alice. 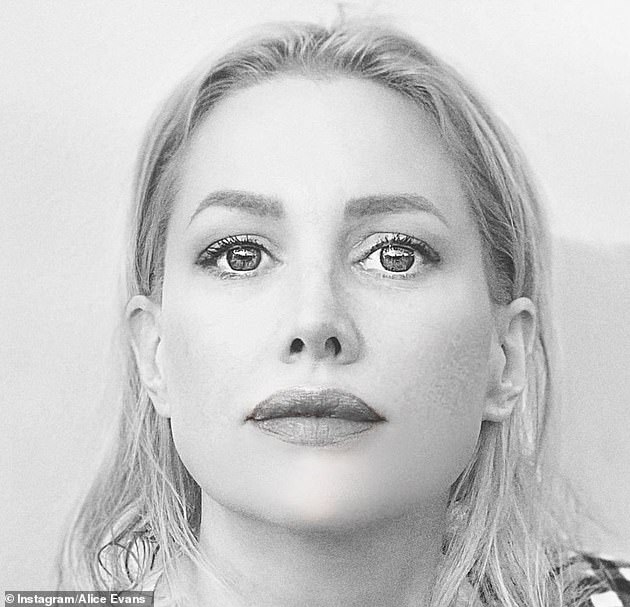 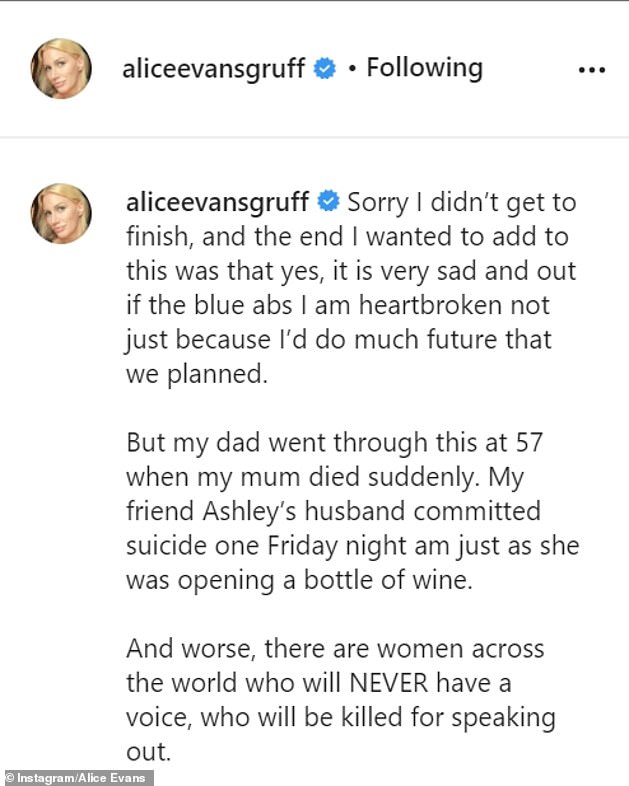 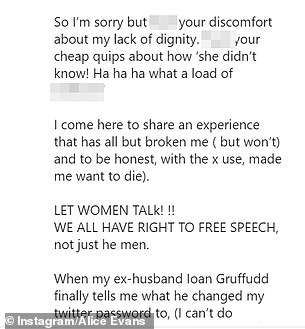 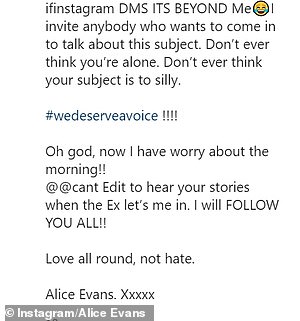 The couple met on the set of 102 Dalmatians in 2000, when Alice was in a relationship with Pablo Picasso’s grandson Olivier.

The pair became engaged six years later after she gave him an ultimatum about their relationship, and tied the knot in an intimate ceremony in Mexico in September 2007.

Ioan recently stepped out without his wedding band for the first time.

The document, which was filed Los Angeles Superior Court on March 1, also reveals the former couple separated on New Year’s Day – a month before they went public with their relationship status.

The papers state the exes are in a ‘collaborative process and intend to resolve all issues including spousal support by written agreement’ – which mirrors their joint statement about their shock break-up.

Last month, they said: ‘As you can imagine, this is an incredibly difficult time for our family and we remain committed to our children. Thank you for respecting our privacy.’

Up and down? In February, the media personality confirmed the couple were pressing ahead with discussions over a ‘legal separation’ (pictured in 2018) 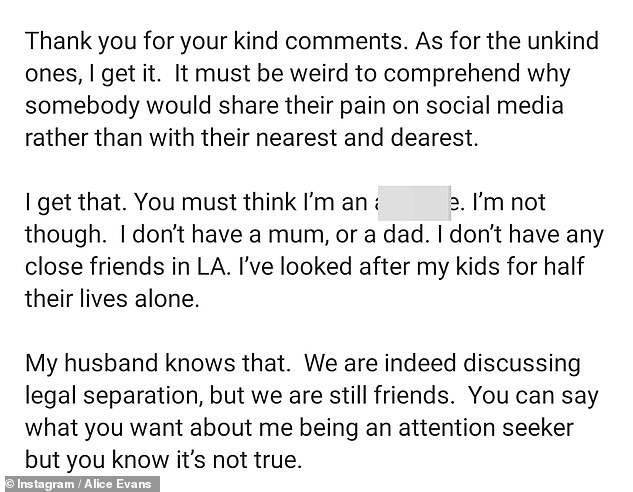 Open: The blonde has taking to social media regularly to update fans on the split

In January, Alice said the actor had walked out on the family in a shock Twitter statement, in which she accused the Liar star of ‘mentally torturing’ and ‘gaslighting’ her.

The Blast claims that it is ‘unclear’ whether Ioan and Alice signed a prenuptial agreement or if the actress will ask for child or spousal support.

News of the split came following Ioan’s return from Australia, where he has been shooting season three of Harrow alongside Ella Newton, 30, and Anna Lise Phillips, 46, who plays his ex-wife. 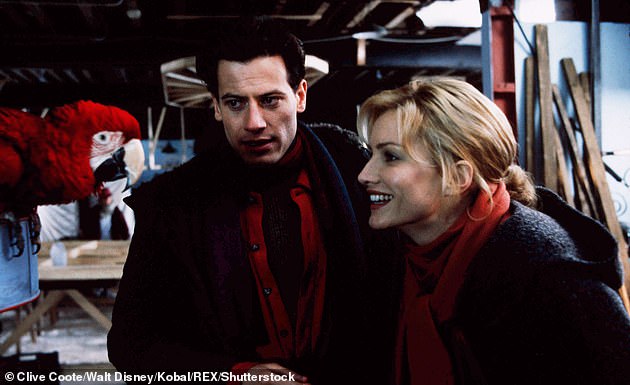 Early beginnings: The couple met on the set of 102 Dalmatians in 2000 (pictured), when Alice was in a relationship with Pablo Picasso’s grandson Olivier