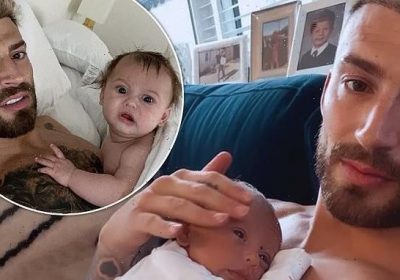 ‘F**king disgrace!’ Jake Quickenden calls on police for help after vile trolls ‘wish death’ on his son, 4 months, and demands sick social media user is ‘locked up’ for hate campaign

The TV personality, 32, called on the Essex police for help and branding those behind the now-deleted Twitter page a ‘f**king disgrace’.

Jake – who shares his son with girlfriend Sophie Church – has been open about the vile social media messages little Leo has endured at the hands of cruel trolls.

On Saturday, Jake shared a series of messages from an account called ‘Jake Quickenden baby is ugky’ [sic], writing on Twitter: ‘I can take some sh*t, but there’s a line you don’t cross and wishing death on a baby is crazy behaviour and whoever is behind it needs locking up.’ [sic] 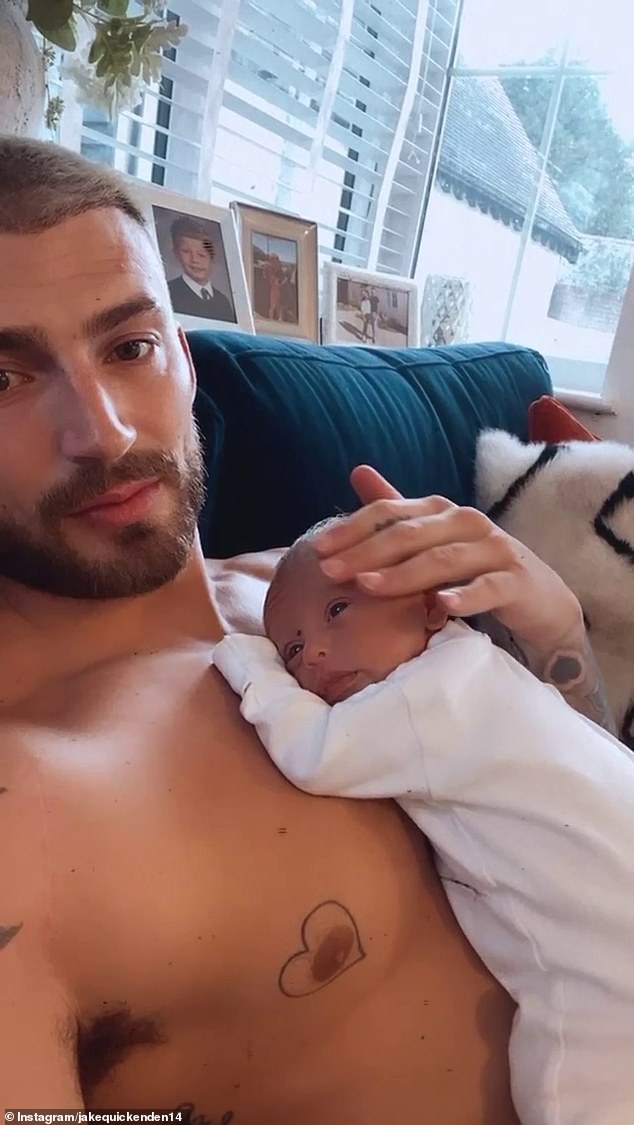 Sharing a screen grab of one of the anonymous account’s messages, doting father Jake tweeted Essex police saying: ‘Can someone from @EssexPoliceUK surely help this page is disgusting!! Need to find out who is behind it.’

Responding to rugby player Ryan Brierley, who also took to social media to share his disgust over the messages, Jake added: ‘Yeah mate mad some sad jealous weirdo with nothing going for them so they wish death upon my baby….

‘this is why social media needs to do more, I wish I could find out who it was.’

Thanking his fans for their support, Ryan added: ‘Thanks guys, you know what I can take some test giving me sh*t, but there’s a line you don’t cross and wishing death on a baby is just crazy behaviour.’

The TV personality added: ‘Whoever is behind it needs locking up, how in 2021 can we nit find out who are behind these fake accounts!’ [sic] 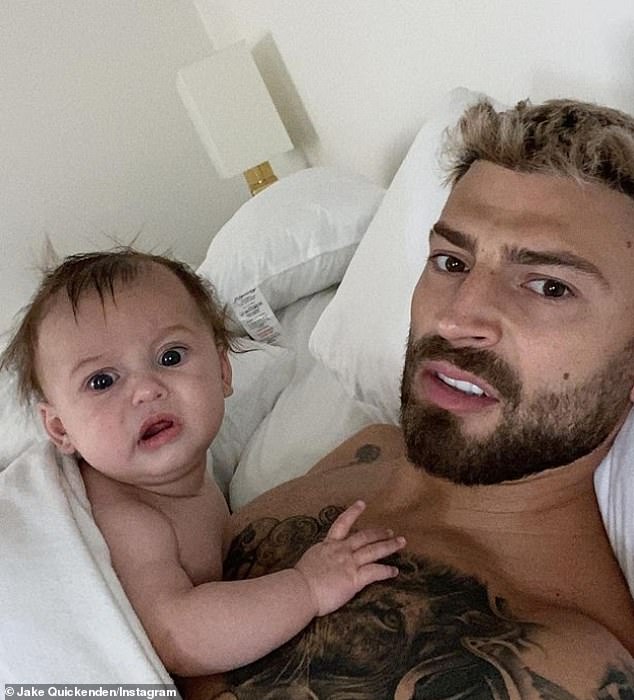 Vile: On Saturday, Jake wrote on Twitter: ‘I can take some sh*t, but there’s a line you don’t cross and wishing death on a baby is crazy behaviour and whoever is behind it needs locking up’

Disgusting: Jake was targeted by a now-deleted Twitter page set up with the sole purpose of trolling his young child

Proposing a show to ITV and the BBC, Ryan also tweeted: ‘I’d love to do a show where you work with the police to track down some of these racist and horrible trolls and knock on their door with the people they have trolled!’

He continued: ‘Surely this is doable and can help and show the effect these people have on others.’

Last month, Jake admitted he ‘can’t get his head around’ people who troll his young son Leo and thinks they must be ‘hurting’.

Speaking out: Jake addressed the horrific messages on Twitter and reached out to the police for help

Speaking on Loose Women in June, the doting father took the high road and said he hopes those who troll learn it’s ‘not right’.

He said: ‘It was a bit strange, I’ve done TV long enough to know I’m going to get someone saying my teeth are too big.

‘It’s weird that we have to accept that. But then when it happened to Leo and people said a few nasty things I couldn’t get my head around it.

‘The more I thought, I thought we’ve all gone through a tough couple of years and I thought these people must be really hurting and it’s a shame that people deal with things in different ways. They’re amplifying their hate to someone else.

‘I understand it in a way, although it’s not right. I hope they see it soon and have someone to talk to about it.’ 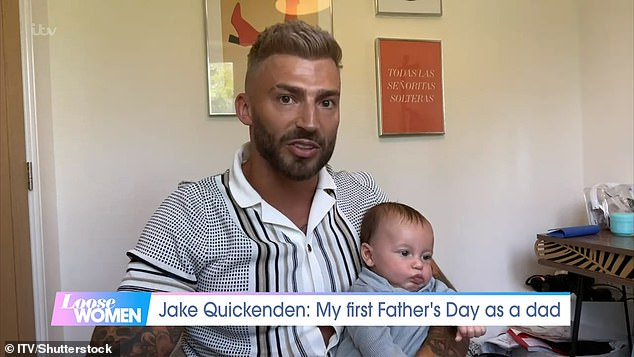 Candid: Last month, Jake admitted on Loose Women he ‘can’t get his head around’ people who troll his young son Leo and thinks they must be ‘hurting’

Speaking to The Sun last month, Jake said: ‘Obviously the emotions I felt when he was trolled was anger and like surprise.

‘I understand if someone doesn’t like me, I can be a bit annoying so I get that. But to troll a baby to try and get a reaction out of me, is a little bit low.

‘But you have to think, these people might need the random act of kindness. These people are probably the ones that need it.’

Elsewhere during his appearance on the ITV daytime show, Jake spoke about what becoming a dad felt like. 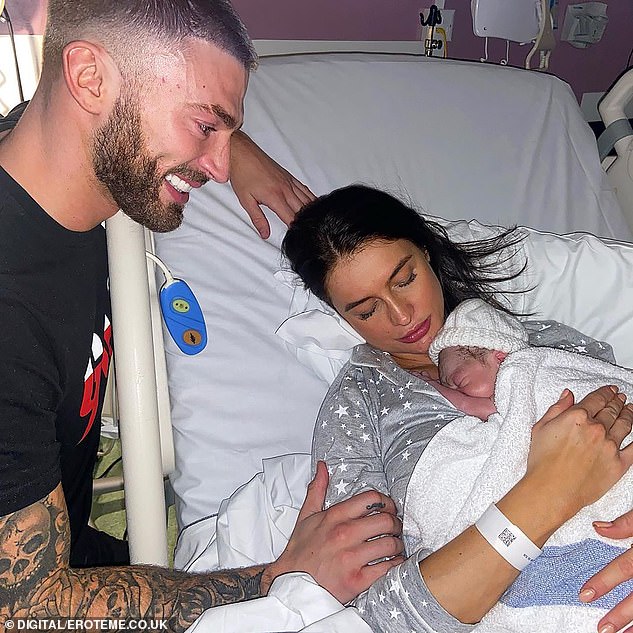 Jake said: ‘I understand if someone doesn’t like me, I can be a bit annoying so I get that. But to troll a baby to try and get a reaction out of me, is a little bit low’

He said: ‘It’s filled a void. It’s hard work. Anyone who has had a baby knows it’s hard. But I look forward to waking up and seeing his smiling face looking at me.

‘Nobody was quick to warn me about the sleepless nights and babies. They said it was brilliant. Which it was, but it’s hard.

‘I’ve got so much respect for other parents, especially people who do it by themselves. It’s the most rewarding and heart-filling thing.’

Jake was already a ‘step-dad’ to his girlfriend’s son Freddie and praised her as an ‘amazing mum’.

He said: ‘Freddie’s my little best mate. I never tried to come in and be his step-dad, if you will. He’s got an amazing dad and amazing mum in Sophie.

‘He’s been raised in such an incredible way, I just thought how can I be another positive role model in his life.

‘If anyone ever asks or if he does, I say you’re my best little mate and I’ll always be here if you ever need anyone else to turn to.’

He added: ‘If Leo turns out anything like Freddie I’ll be really, really happy.’ 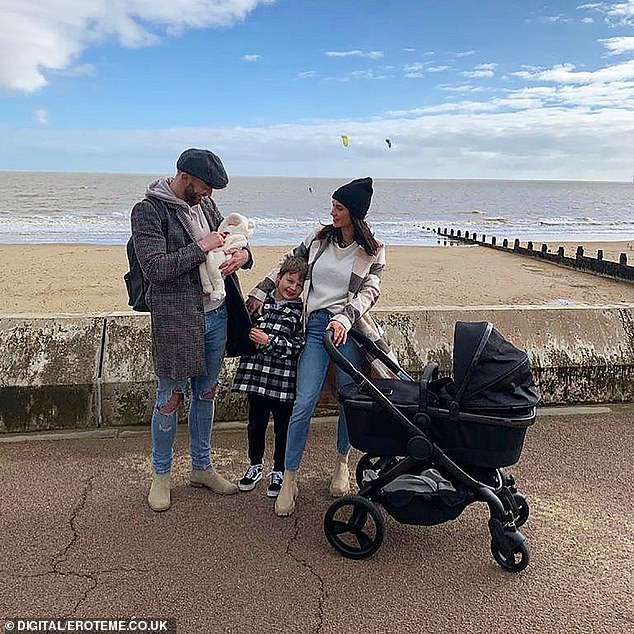 Proud parents: Jake was already a ‘step-dad’ to his girlfriend’s son Freddie and praised her as an ‘amazing mum’