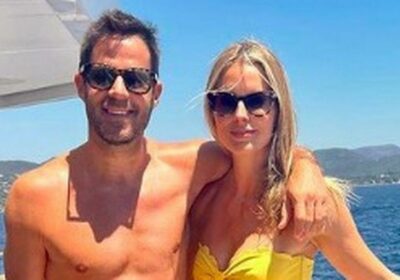 Ex-footballer Jamie Redknapp has shared pictures of his blended family as he enjoys a holiday with his wife Frida Andersson, their eight month old son, Raphael, as well as Jamie's two other sonsCharley, 17, and Beau, 13, from his previous marriage toLouise Redknapp.

The son of former England football manager Harry Redknapp, Jamie, 48, has been enjoying a holiday in Italy with his new wife Frida, a 38 year old Swedish model.

Jamie shared a number of snaps of his blended family as they enjoyed their holiday, including snaps of him doting on his youngest son, Raphael, and a photo of them all enjoying dinner as a family with Frida's three children.

Frida has two sons and daughter whom she shares with ex-husband Jonathan Lourie.

Jamie wed a then-pregnant Frida in a toned-down ceremony with his parents Harry and Sandra Redknapp there to witness, showing their sign of approval.

Jamie and singer Louise announced their decision to split in 2017, after 19 years of marriage and two children together.

Discussing the aftermath of their breakup, Louise emotionally opened up on the breakdown of her marriage and her decision to appear on Strictly Come Dancing to “have a little fire again” before the split.

“I adore him and always will. Jamie was the absolute love of my life,” she told Fabulous Magazine.

“I guess I was happy to be invisible for a little while, but at the same time I felt I was becoming less and less of a person. And being less and less visible was kind of hard to take when I used to be a pop star.”

Louise continued by revealing that her appearance on Strictly in 2016 alongside dancing partner Kevin Clifton “reignited” her passion for performing.

She explained: “I never went into Strictly thinking I wanted to achieve anything or do more. I went in thinking: ‘God, time’s running away.’”

“I was a bit lonely. My kids were getting bigger and Jamie was very busy. He had a very, very full life and I was just going: ‘Well, what’s next for me?’”