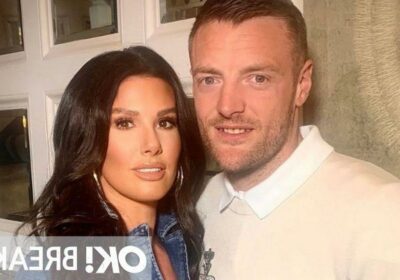 Jamie Vardy and his wife Rebekah Vardy were faced with a terrifying incident as their mansion home caught fire yesterday (Thursday 19 January).

The couple's gym was reported to have gone up in flames as firefighters were called to the scene.

The blaze, which was at the couple's home in Lincolnshire, was said to have been mainly inside one of the outbuildings.

It is believed the fire service managed to put out the blaze, but the Vardy family home suffered "severe damage".

The local fire service told LincolnshireLive that their employees were called to the scenes after reports Thursday afternoon.

"Firefighters were called to reports of an outbuilding on fire at premises in Water Lane, Stainby at 3.20pm on January 19," it read.

"The fire resulted in severe damage to 90 per cent of a wooden outbuilding being used as a gym and the equipment."

Rebekah also gave her thanks to the firefighters as she addressed the incident on her Instagram page.

"Every cloud and all that," the star began. "Thankfully no one was hurt….

"Buildings and contents are replaceable and the kiddies enjoyed the fire engines.

"Thank you for being so brilliant @lincolnshirefirerescue," the WAG added.

"Oh gosh! Hope you're all ok," one fan said in the comments.

Another person shared their well-wishes for the family as they recognised the star's worry. "How scary. Glad you're ok," they wrote.

The couple also built tennis courts on the grounds, and in 2020 they obtained planning permission to extend the eight-bedroom property to 10.

The proposal was described as "change of use from agricultural paddock to equestrian including new stable building and yard for residential purposes only".