Jane Fonda, 82, models over-the-knee PVC boots as she shares she has stopped shopping to be more green: ‘I still wear what I wore 30 years ago!’

Jane Fonda has combined her passion for activism and her status as a fashion icon.

In the new issue of Interview the 82-year-old actress was ultra-chic in a photo-shoot that accompanied her discussion about politics with Indya Moore.

During her interview Jane, who racked up a string of high-profile arrests at climate protests last year, discussed the impact of her activism on her choice of clothes. ‘We have to not waste so much. We have to be satisfied with less. I’m trying to not buy anything new anymore, no new clothing,’ she told Indya, 25. 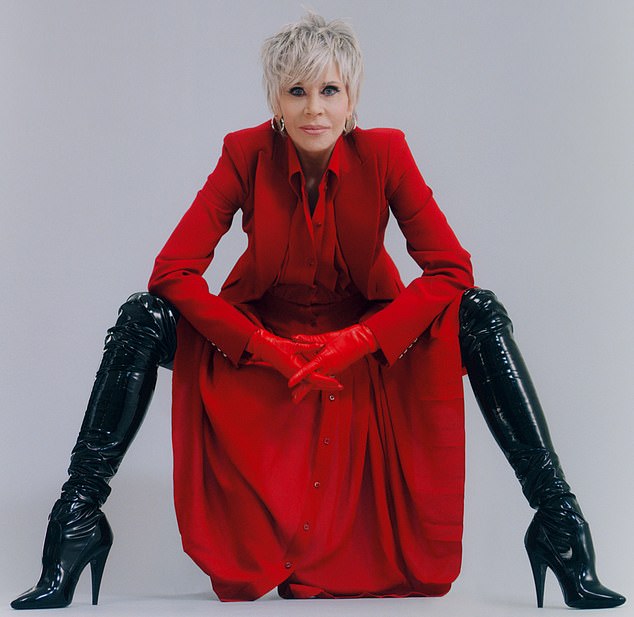 Electrifying: Jane Fonda combined her passion for activism and her status as a fashion icon for a new article in Interview magazine 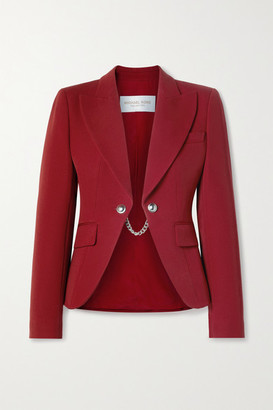 ‘But I also understand that I can say that because I still wear what I wore 30 years ago, and I have a lot of clothes, so it’s easy for me. Pay attention to what you buy.’

In one breathtaking snapshot she modeled a scarlet blazer and dress combo by Michael Kors and struck a power pose for the camera.

She teamed that ensemble with a pair of black leather stiletto boots from Saint Laurent By Vaccarello, plus Cartier hoop earrings.

The workout tape queen showed off her still enviably figure in a tight black Bottega Veneta dress as well as a pair of gloves from her own wardrobe in another snap. 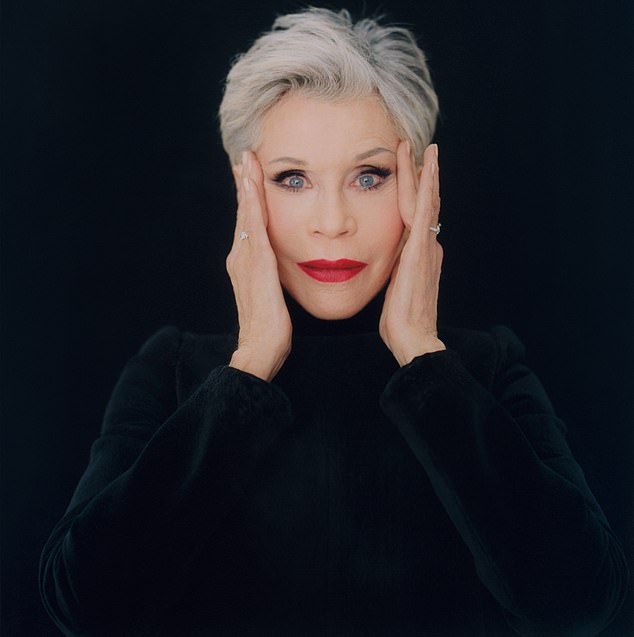 Glamour: The 82-year-old was ultra-chic in a photo-shoot that accompanied her discussion about politics with Pose star Indya Moore

Jane also discussed her self-confessed ‘privilege’ while looking back on her political activism in the 1960s and 1970s.

Although she says she found herself on a ‘gray list’ where ‘studios didn’t really want to work with me’ she was shielded to an extent by her background.

‘I mean, look, I have to be very honest. I am Henry Fonda’s daughter. I have always had privilege. When it was very slow going in terms of my ability to earn a living, I had savings that I could fall back on,’ she said. 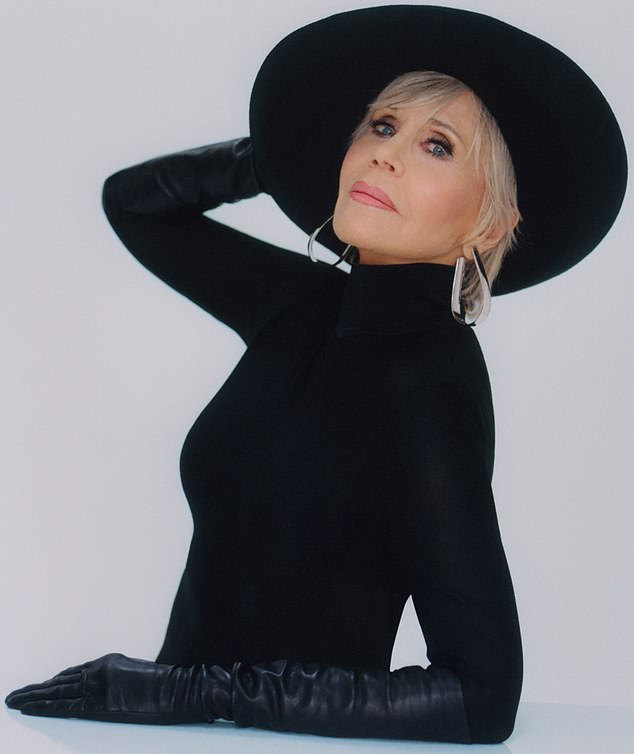 Sensation: The workout tape queen showed off her still enviably figure in a tight black Bottega Veneta dress as well as a pair of gloves from her own wardrobe in another snap

‘I don’t want to pretend that I was scraping nickels and dimes together. I lived pretty close to the bone for quite a while, but I always knew I could make it. I have to say that. My privilege protected me a lot,’ Jane shared.

‘My home was broken into. I was followed for a number of years. We had a lot of death threats. We had to have someone turn on our car remotely before we would get in it, because we were afraid that bombs had been planted.’

She was then married to fellow activist Tom Hayden who was in the ‘Chicago Seven’ and was convicted of crossing state lines to incite a riot at the 1968 Democratic National Convention, although the conviction was later overturned.

While discussing the Black Lives Matter movement which she viewed ‘from afar because of the pandemic,’ Jane also chatted with Indya about her role as a celebrity supporter of the Black Panther Party decades ago. 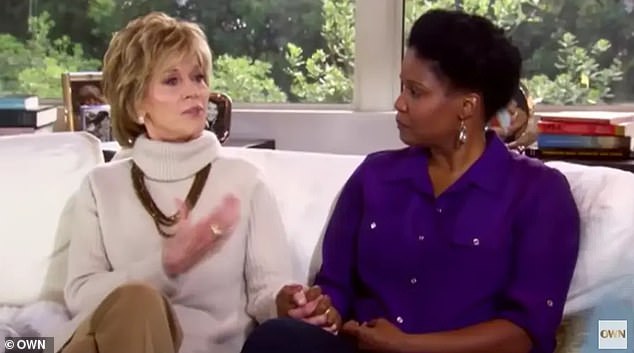 Relationships: Jane discussed her advocacy for the Black Panthers and her adoption of her daughter Mary Luana ‘Lulu’ Williams (right) whose parents were in the organization

Although she praised the group in some respects she also said: ‘I think because the Panthers were so out front about calling for armed revolution, it was almost impossible to build a strong, powerful, diverse support movement.’

‘The U.S. Army and law enforcement were so utterly committed to destroying them that no matter how many white people or movie stars would have supported them, I don’t think it would have saved them. I think nonviolence is the key.’

She remembered: ‘I also had the opportunity to go to Oakland and see the Black Panther schools. Eventually, I adopted a girl, Lulu.’ 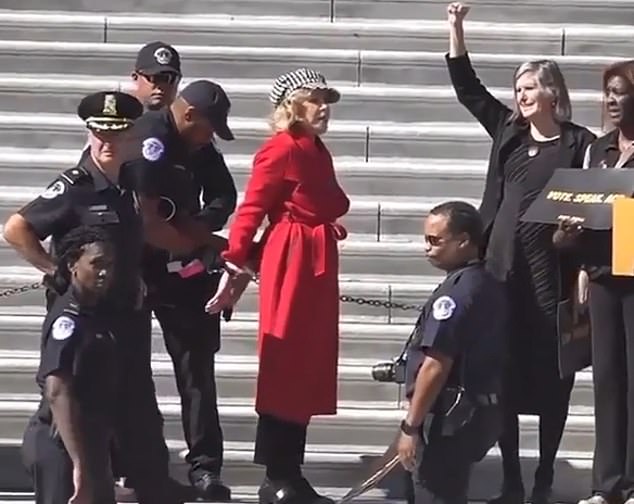 Going strong: Jane is still hitting the headlines for her activism and racked up a string of arrests late last year while engaging in climate protests in Washington, D.C.; seen in 2019

Jane added: ‘She’s now 51, but she was a young girl at the time who went through the school and the breakfast programs and grew up in Oakland. I know with absolute certainty that were it not for her growing up in the nest that was created in Oakland by the Black Panthers, she probably would not be alive today.’

As an antiwar activist in 1972  Jane was snapped in Hanoi sitting on a North Vietnamese antiaircraft gun used against Americans.

That photo earned her lifelong infamy as ‘Hanoi Jane,’ and she has been protested by military veterans ever since, though some ex-military have also supported her.

During her 1972 trip to enemy territory, she also participated in propaganda broadcasts from the North Vietnamese Army’s station Radio Hanoi. 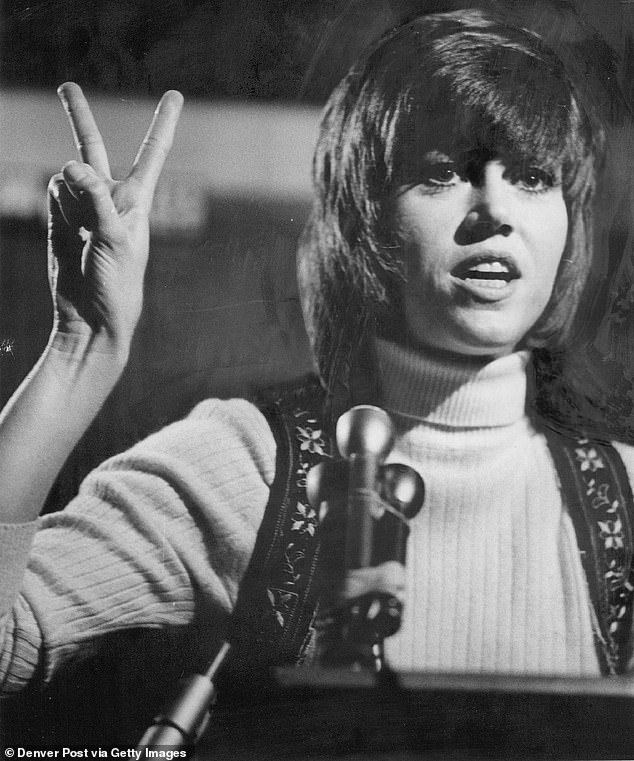 Remember when: Jane drew global attention as an activist against the Vietnam War in the 1970s; she is pictured at a 1970 press conference in Denver

While speaking on Radio Hanoi she intimated that U.S. servicemen should disobey their orders – though she said on 60 Minutes decades later that she was merely ‘asking them to consider it.’

After returning to the United States, she said in an 1973 interview quoted by the New York Times that the torture of American prisoners of war was ‘understandable.’

She told KNBC-TV: ‘These men were bombing and strafing and napalming the country. If a prisoner tried to escape, it is quite understandable that he would probably be beaten and tortured.’ 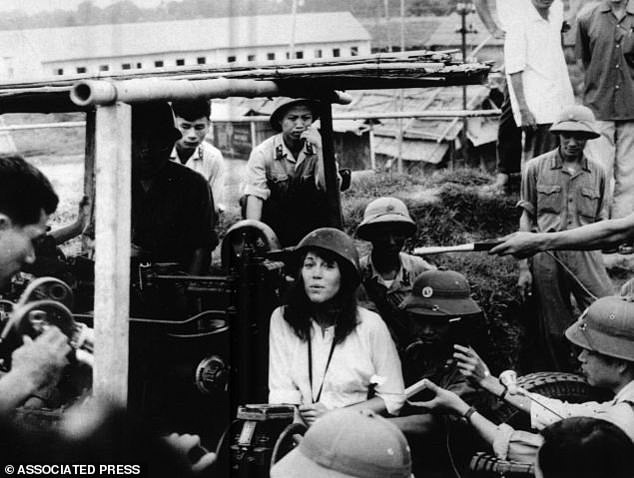 ‘Hanoi Jane’: As an antiwar activist in 1972 Jane was infamously snapped in Hanoi sitting on a North Vietnamese antiaircraft gun used against Americans

In the 2018 documentary Jane Fonda In Five Acts she reflected on how her drug use and disordered eating influenced her political activities during the Vietnam War.

‘I was alternately bulimic and anorexic. I would maybe eat one soft-boiled egg and spinach a day, period. I took Dexedrine, which is speed,’ she said.

‘So I was really speedy, and I was starving, along with like getting all of this new information coming in at a very rapid pace,’ Jane explained.

‘I mean, I’m high-strung anyway, but me on Dexedrine without eating, and feeling like I have to say everything all at once, it’s like – I’m amazed that anybody could receive what I was saying. It was like: “Wow! Who is this woman?”‘