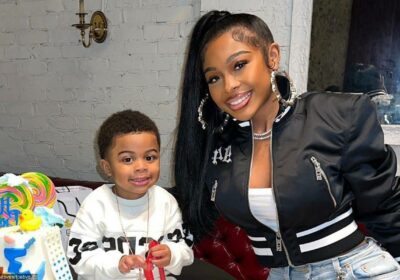 In other news, the entrepreneur takes to her Instagram Story to confirm she did indeed have an eye lift procedure after she receives hate comments about her look.

AceShowbiz –Jayda Cheaves is not only a successful entrepreneur but also a good mom. The social media influencer was earned praised after she was seen commenting on her son talking a little bit casually to grown people.

In a video that she shared on social media, Jayda’s little boy Loyal Armani could be seen joining her. At one point, Jayda was caught off guard when he said, “What?” to her. “What I told you about saying ‘what,’ seriously?”

Loyal was quick to correct him. He said with laugh, “Okay. Yes, ma’am…” Jayda could not help but laugh out loud over her boy’s response.

Upon learning of the cute interaction between the mom-son duo, Internet users immediately complimented Jayda over her parenting. “Amazing mom. Teaching him manners early and correcting him with love when he slips up. I’m from the south, and my folks ain’t play that, ‘what?’, nonsense when addressing grown people,” an Instagram user commented.

“Thats right jayda teach him right… we wasnt allowed to ‘What’ or nothing but YES or COMING,” another person agreed. “She’s such a good mom,” raved someone else.

Another fan pointed out that “their bond is so wholesome.”Meanwhile, someone could not help but gush over Loyal, whom Jayda shares with rapper Lil Baby. “He’s so cute and smart,” the person wrote.

In other news, Jayda confirmed she did indeed have an eye lift procedure. On Thursday, April 14, she posted to her Instagram story, “She look different I don’t like her face Shut up y’all ain’t say that till i put a wig on my head. Just say y’all forgot how i looked in wigs since i haven’t been wearing them.”

Jayda also received so much backlash in her recent post promoting a natural haircare oil to keep her edges full. One hater wrote, “Not you posting a old video because of your new eyebrow lift.” To that, Jayda replied, “eye lift. And i had it here actually.” In another comment, she added, “Google an eye lift and then come back to me.. it looks exaggerated because i have on a wig which snatches me more.”