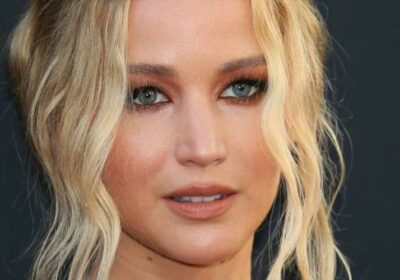 Jennifer Lawrence's undying love of all things Kardashian is well-documented, but during a panel for her new film, Don't Look Up, Lawrence gushed about another star (and co-star) that makes her lose her cool: songstress supreme Ariana Grande. During a Q&A session with BAFTA voters at the Harmony Gold Theater in Los Angeles yesterday, Lawrence revealed that when she met Grande for the first time, she went "full radio contest winner" and "was so nervous and excited" that she could hardly maintain her composure.

"She can't make bad music. I've since reflected on my behavior with Ariana Grande. I went full radio contest winner," Lawrence said during the panel, which was shared by Variety. "I was so excited and nervous and at one point, I just kind of walked into her hotel room and was like, 'Hello!' and sat down."

Lawrence also being surprised by everything that it takes to actually be Ariana Grande, saying "I've just been thinking about it a lot lately … There were all of these trunks for her hair and makeup, and I was like, 'Do you live here?'"

And if the whole Ariana Grande fangirl moment wasn't enough for Lawrence to remember this production by, she told Vanity Fair that there was a wardrobe malfunction that she'll never forget.

"And the nose rings … one just kind of hangs in; one is a magnet," she said, noting that she almost choked on them multiple times. "And many, many times I accidentally inhaled said magnet and had to spit it out in front of Leonardo DiCaprio."