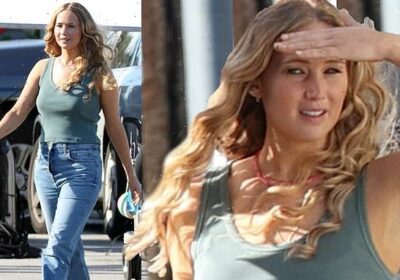 Jennifer Lawrence showed off her fit figure as she filmed her new movie, No Hard Feelings, on Long Island in New York on Thursday.

The Hunger Games star wore a green tank top and high-rise denim jeans as her long blonde locks blew in the wind.

The 32-year-old Oscar winner wore leather sandals for the scene and walked towards a green car with a New York license place before opening the door of the vehicle. 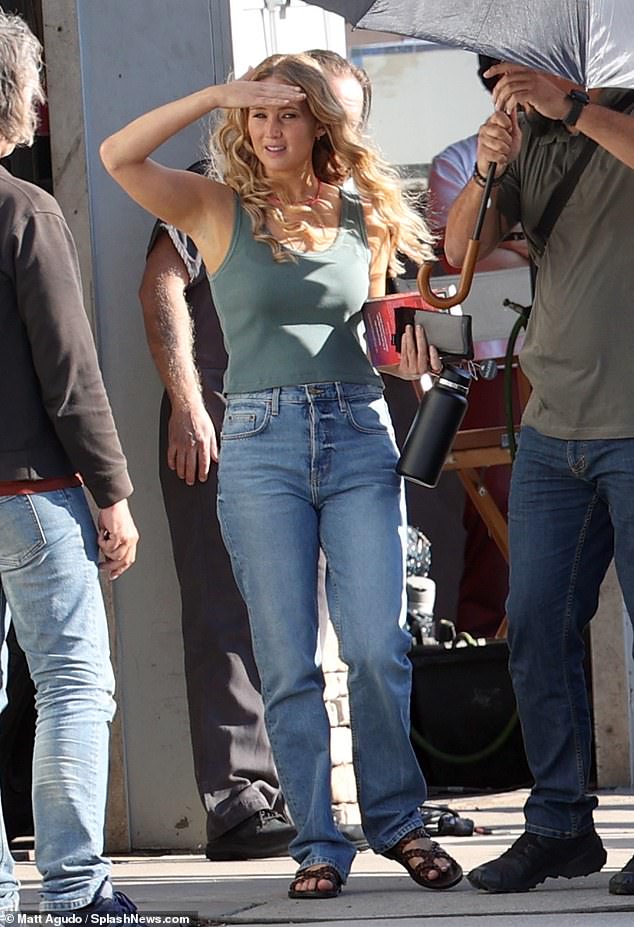 Thin look: Jennifer Lawrence showed off her fit figure as she filmed her new movie, No Hard Feelings, on Long Island in New York on Thursday

It looked to be a warm sunny day as the crew members helped shield the star with umbrellas between shots.

No Hard Feelings also stars Matthew Broderick, Kyle Mooney, and Laura Benanti. The X-Men actress not only stars in the project but serves as one of the producers.

With production in full swing, Sony’s R-rated comedy No Hard Feelings has a release date of June 16, 2023.

An official synopsis has not yet been released, but Vogue describes the R-rated romp as ‘a Harold and Maude–type comedy based on a Craigslist ad in which a mom was seeking someone to date her son before he went to college.’ 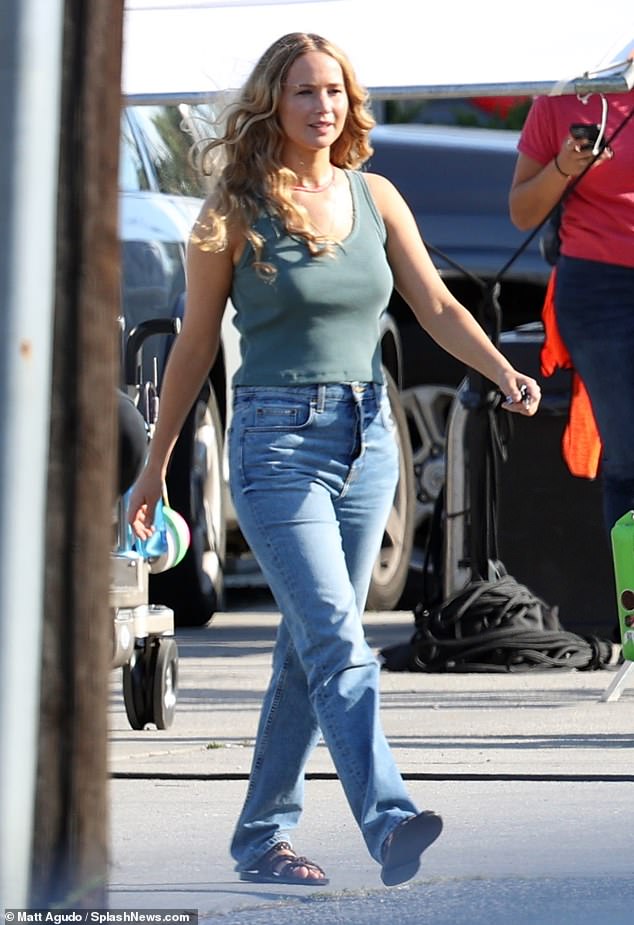 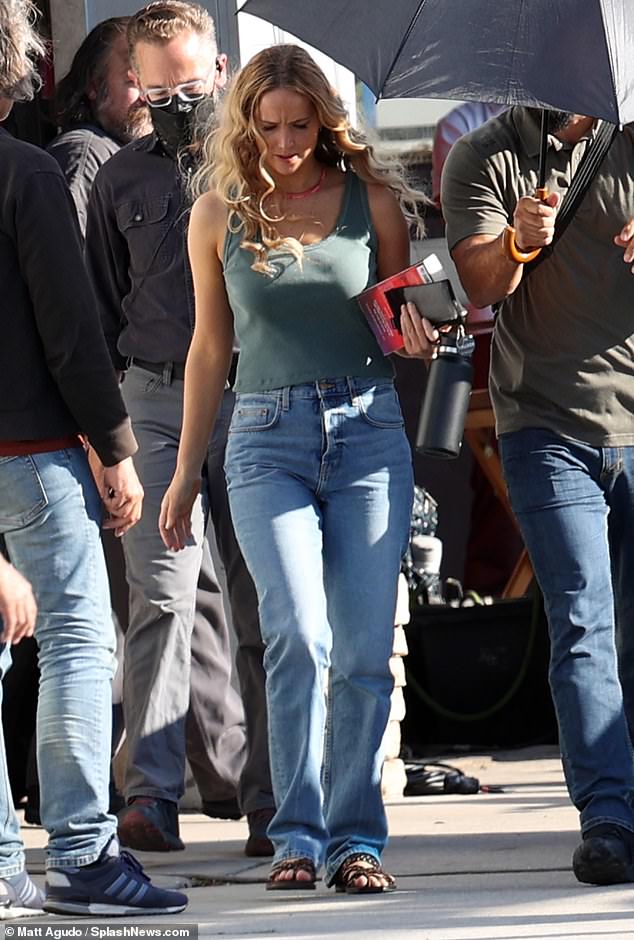 The plot: The comedy film centers on Jennifer’s character, who finds a Craigslist ad placed by a mom looking for someone to date her son before he heads off to college. No Hard Feelings has a release date of June 16, 2023

Gene Stupnitsky, who introduced Jennifer to her husband Cooke Maroney, 38, co-wrote the script and is directing.

The Don’t Look Up star was on set earlier this week, filming her first project since welcoming her child Cy with Maroney in February.

The Passengers actress and her husband started dating in 2018 and tied the knot the following year.

In an interview on the Naked with Catt Sadler podcast, the star said, ‘I definitely wasn’t at a place where I was like, “I’m ready to get married.” 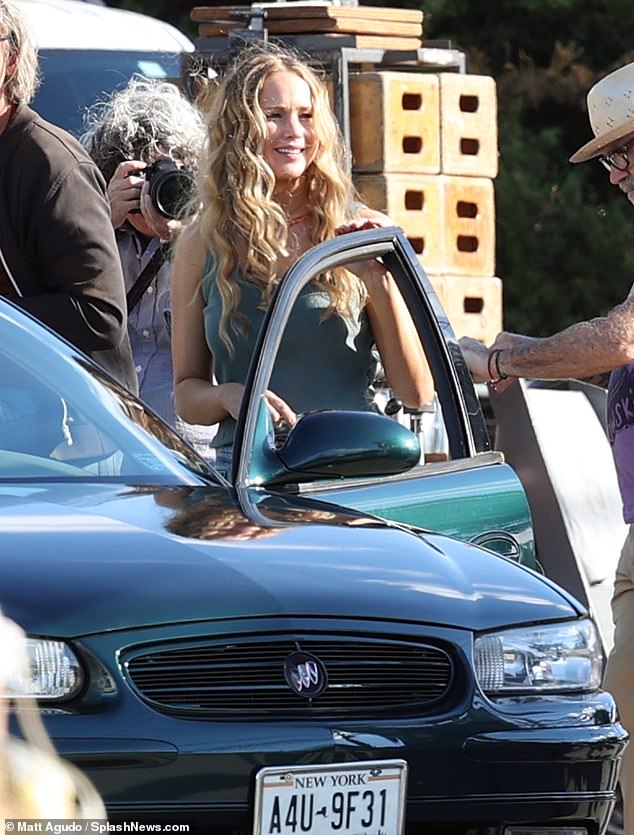 Full swing production: In the scene, the 32-year-old Academy-Award winner walked towards a green car with a New York license place before opening the door of the vehicle

‘And fortunately, the paperwork exists for such a thing. It’s the greatest. You find your favorite person on the planet, and you’re like, “You can’t leave!” So I wanted to take that offer.’

In the October cover story of Vogue, the Red Sparrow star explained her feelings about being a first-time mom, having given birth to a baby boy only seven months ago. 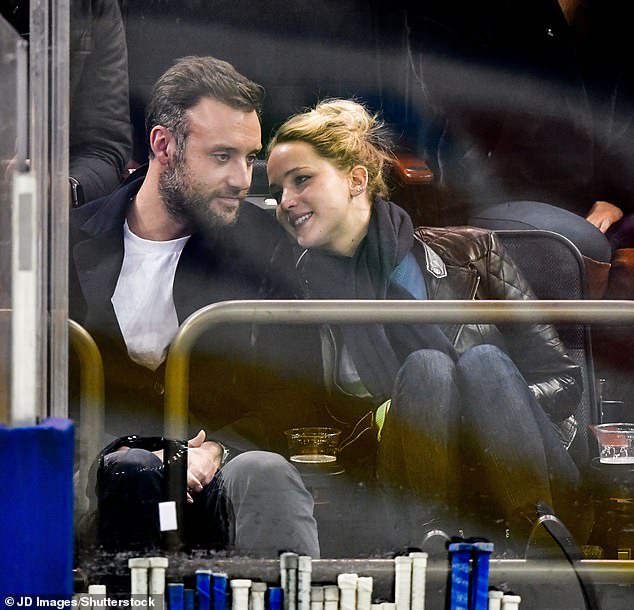 With her true love: The actress seen with Maroney at a hockey game in 2018

The first time mom revealed, ‘The morning after I gave birth, I felt like my whole life had started over. Like “Now is day one of my life.” I just stared. I was just so in love.

‘I also fell in love with all babies everywhere.

‘Newborns are just so amazing. They’re these pink, swollen, fragile little survivors. Now I love all babies. Now I hear a baby crying in a restaurant, and I’m like, “Awwww, preciousssss,”’ she told the magazine. 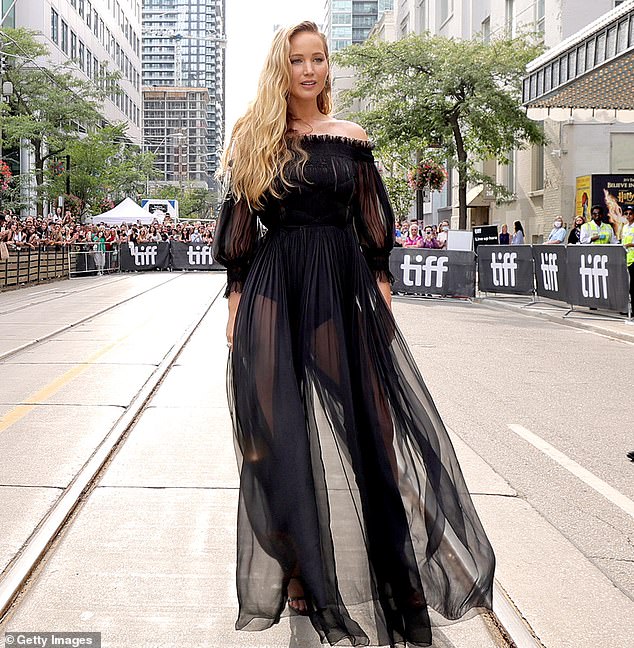 Hot stuff at TIFF: She wore a sheer black dress at the Causeway premiere during the 2022 Toronto International Film Festival