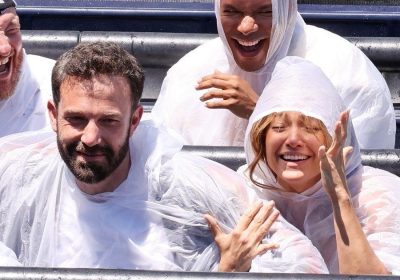 Jennifer Lopez and Ben Affleck played at happy families as they took their kids for a day out at Universal Studios.

Ben brought son Samuel, nine, from his marriage to Jennifer Garner on the day trip, while singer J Lo was joined by twins Max and Emme, 13, for a day of rides and pure unadulterated fun.

In one snap, the newly-reunited couple, who first dated from 2001 to 2004, giggled their way through a log flume ride.

Jenny From The Block hitmaker Jennifer, 51, grabbed hold of her beau and made sure to wear her hooded rain poncho up to cover her flawless caramel blonde locks.

Ben, 48, looked calm and casual as he grinned for the hilarious activity.

Also during the day out, Jennifer, Ben and the children leisurely wandered around the park and were spotted particularly enjoying a stroll through Springfield – the park’s The Simpsons attraction.

Jennifer’s curly waves hung loose and natural around her face, and she wore a pair of oversized sunglasses to shield from the beating sun.

The superstar actress donned a white crop top and loose drawstring trousers with a pair of white trainers for the outing.

She teamed the look with a handy pink cross body bag, while Ben matched in casual wear with a white T-shirt and grey hoodie.

The duo’s short-lived romance ended after three years the first time around, when they couldn’t see a future together that matched both of their goals.

It was a massive shock when fans of Bennifer spotted the pair out and about together again earlier this year.

It came as Jennifer and former fiance Alex Rodriguez had cancelled their engagement and Ben and Knives Out actress Ana de Armas split up.

Jennifer and Ben's reconciliation has been one of epic proportions between the 00s favourites.