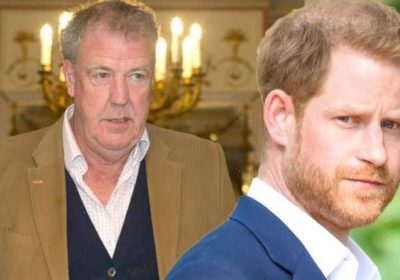 Jeremy Clarkson has today hit out at Prince Harry ahead of the release of his tell-all memoir. The Grand Tour host said he doesn’t care how the Duke of Sussex “fills his pointless and directionless days”.

Why should I care how Prince Harry fills his pointless and directionless days?

The 61-year-old certainly didn’t hold back as he shared his thoughts on Prince Harry’s news.

The latter announced on Monday he is working on a book, set to cover “his lifetime in the public eye”.

It will include his “childhood to the present day, including his dedication to service, the military duty that twice took him to the frontlines of Afghanistan and the joy he has found in being a husband and father”.

The offering, which Penguin Random House aims to release late next year, has been described in a statement by the Archewell team as the “definitive account of the experiences, adventures, losses, and life lessons” that helped shape the Duke.

However, Jeremy has said Prince Harry is “fairly screwed” when it comes to what Britain’s reaction to the release will be.

Writing in his latest column entitled “Two successful men pay their own way to space. And, surprise, surprise, they’re hated for it”, the former Top Gear star revealed what he thinks is the “worst thing” about Great Britain.

Referencing Sir Richard Branson and Jeff Bezos’ flights into space, he slammed those who have criticised them.

Hitting out at “do-gooders in leftie suits” for saying the money has been “wasted” and should have been used to solve world hunger.

Jeremy claimed most people in Britain “sneer” at those that are “successful or lucky”, saying his hated phrase: “It’s all right for some.”

It was then that he turned his attention to Prince Harry, and the latter’s latest project after leaving senior royal duties behind.

“This means Prince Harry is fairly screwed, because he got pilloried when he was part of the Royal Family,” he started.

“It really is all right for some, and now he’s being pilloried even more for swanning off to California and getting a few million quid to write a book.”

Jeremy continued in The Sunday Times: “But I’m not going to read it, so why should I care how he fills his pointless and directionless days?

“Or that an idiotic publishing house has splurged eight figures on what will be a load of tear-stained tosh?”

Prince Harry has already addressed the book, saying: “I’m writing this not as the prince I was born but as the man I have become.”

He added: “I’ve worn many hats over the years, both literally and figuratively, and my hope is that in telling my story — the highs and lows, the mistakes, the lessons learned — I can help show that no matter where we come from, we have more in common than we think.

“I’m deeply grateful for the opportunity to share what I’ve learned over the course of my life so far and excited for people to read a firsthand account of my life that’s accurate and wholly truthful.”

Jeremy is the latest in a long list of celebrities to have voiced their opinion on the venture.

Piers Morgan took to Twitter to air his disbelief earlier this week, reacting in view of his 7.9 million followers.

He penned: “You’ve got to be f***ing joking????? Ready to tell his story? Prince Privacy hasn’t stopped yapping, whining & trashing his family all bl**dy year.”