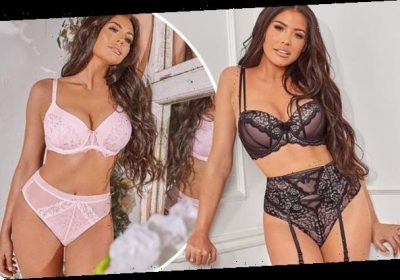 EXCLUSIVE ‘It was big lips and big cheeks’: Jess Wright feared younger sister Natalya would fall for the ‘trap’ of surgery and says it ‘breaks my heart’ seeing young girls change their faces as she poses in new lingerie shoot

Jess Wright feared her younger sister would fall for the ‘trap’ of surgery and said it ‘breaks my heart’ seeing young girls change their faces.

The former TOWIE star, 35, told MailOnline she’s relieved Love Islanders such as Molly-Mae Hague, 21, are choosing to have their filler dissolved in favour of a more natural look, as she vows to never dramatically alter her own appearance. 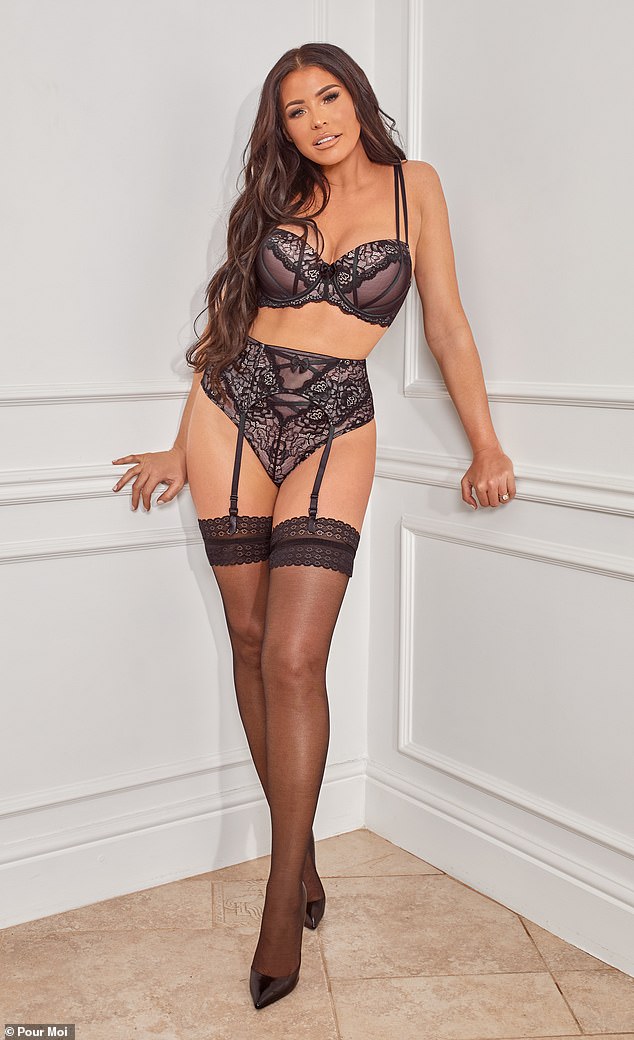 ‘They’re so young’: Jess Wright feared her younger sister would fall for the ‘trap’ of surgery and says it ‘breaks my heart’ seeing young girls change their faces

She said: ‘I am so pleased this is the way things are going because for a long time I’ve seen young girls having filler and all this surgery and it breaks my heart to think they’re so young and they’re changing their face so much.

‘Each to their own and I’m not judging as everyone should be able to do what they want to do but personally I prefer that young girls are changing that now because there was a long time that I thought there was no going back.

‘It was big lips, big cheeks, and it just ended up not looking good. I am really pleased about that – I have a younger sister and I didn’t want her to fall into that trap of thinking that was the way she should be and thankfully she didn’t so that’s really good.

‘Some people might not be able to reverse it – my advice to young girls would really be don’t fall into that trap and definitely don’t over do it.’

The TV personality, who today launches The Jess Wright Edit with Pour Moi, admits she feels ‘annoyed’ when followers from her 1.4million fan base accuse her of having ‘loads of work done’ to her face – when she’s only ever had Botox. 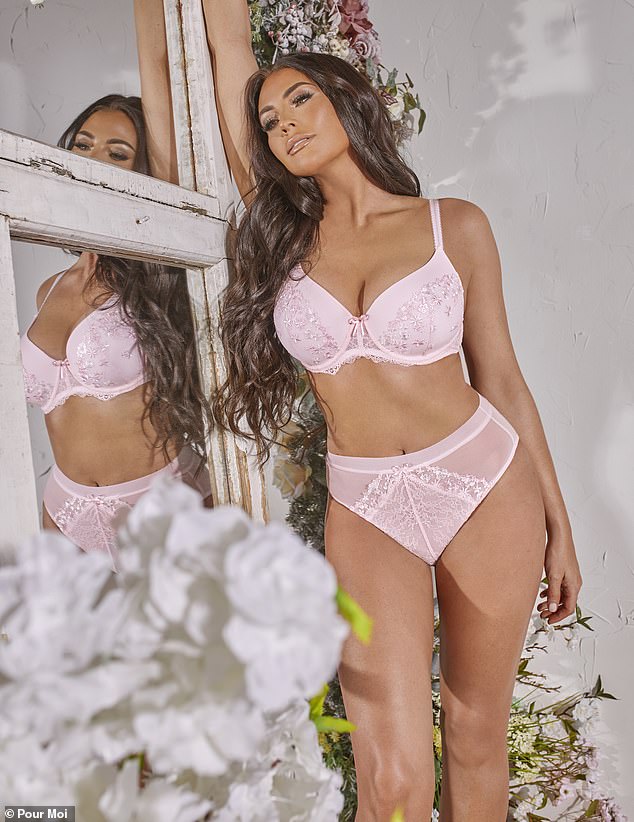 ‘Don’t over do it’: The former TOWIE star, 35, told MailOnline she’s relieved Love Islanders such as Molly-Mae Hague, 21, are choosing to have their filler dissolved in favour of a natural look 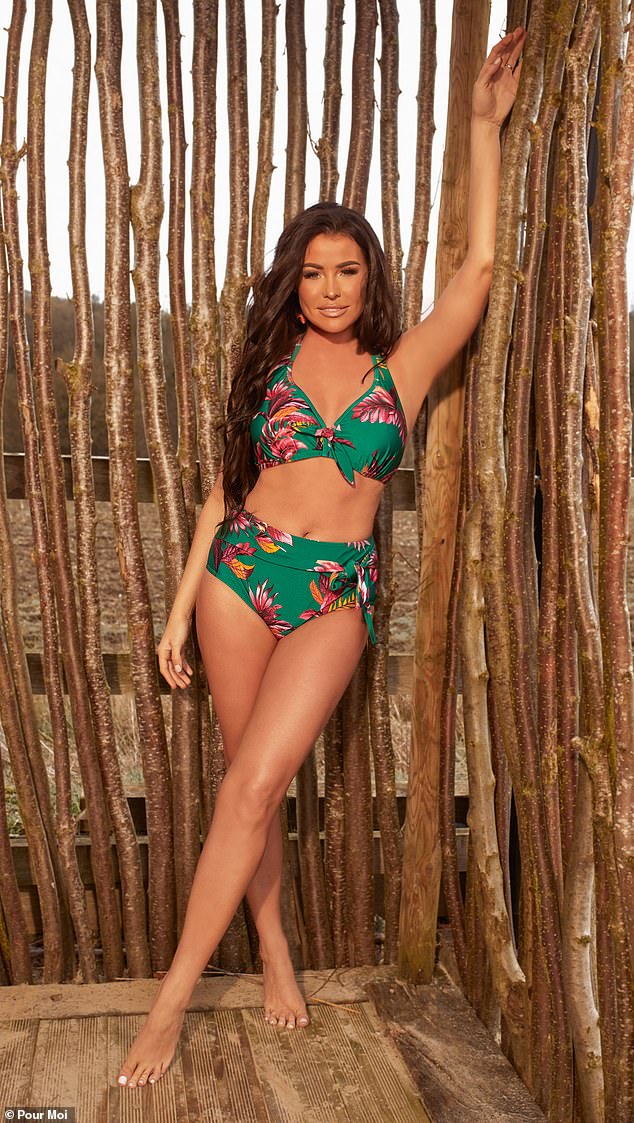 ‘Don’t fall into that trap’: Speaking exclusively as she stars in a new shoot for Pour Moi, Jess said she’s thankful her sister Natalya, 20, escaped falling victim to ‘big lips and big cheeks’

She said: ‘It does annoy me when I see comments online and they’re like “oh God she’s had so much work done she doesn’t look anything like she used to” – I’ve had nothing done, I’ve had a bit of Botox, that’s what annoys me.

‘My main thing is having good Hydro facials and minimal Botox, or baby Botox.

‘I don’t want to go down the filler route. I don’t think it would suit me if I ever went down that road. I’d just look puffy.

‘I am one to say never say never but it really does scare me because I’ve seen so many examples of when someone looks like they’ve done too much – for me, it’s not my preference.

‘I don’t know if I’ll grow old completely gracefully but I don’t think I’ll go down the route of where I look totally different or where I have filler or anything like that.’ 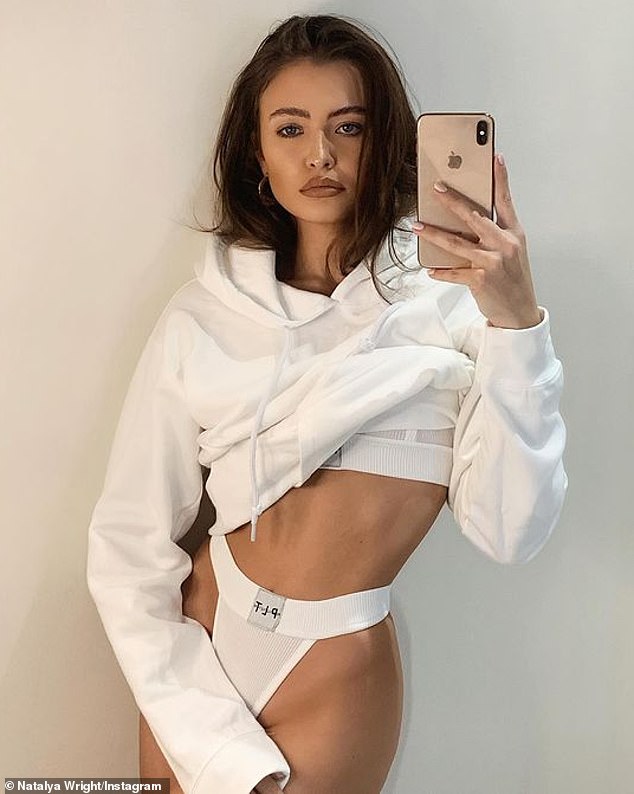 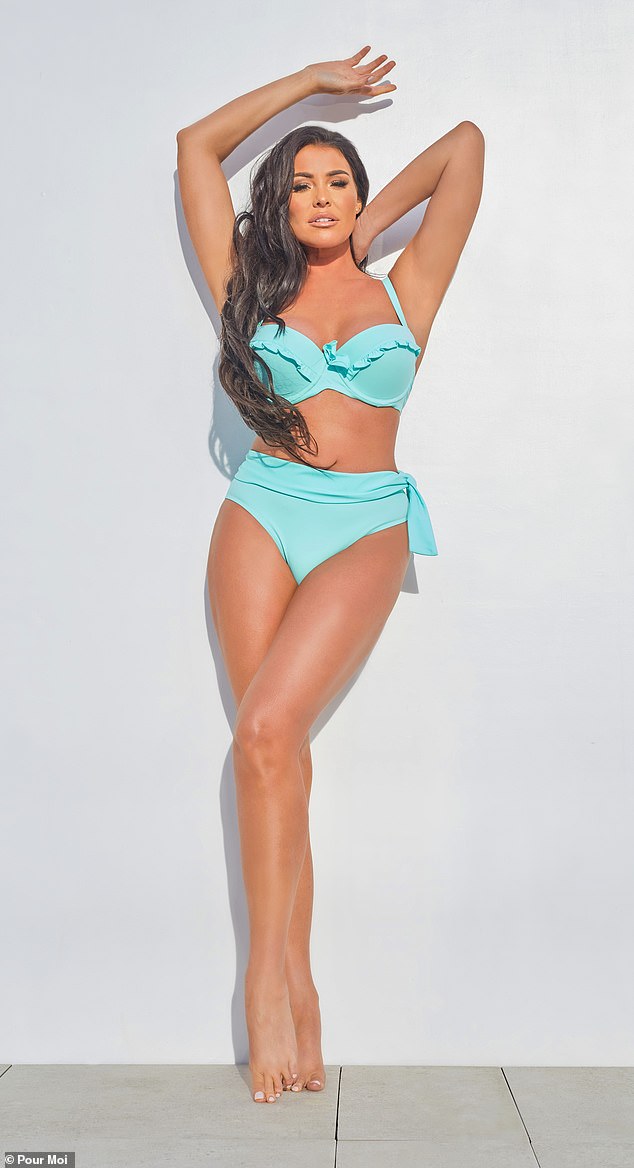 ‘I’ve had a bit of Botox’: The TV personality admits she feels ‘annoyed’ when followers from her 1.4million fan base accuse her of having ‘loads of work done’ to her face

Jess revealed she had a boob reduction last year after first going under the knife in 2011, decreasing her cup size from a 32DD to a 32C.

She originally had her breasts enlarged in scenes filmed for reality series TOWIE – but later said she regretted the procedure being shown on TV.

‘I had my boobs reduced last year because they were too big, which wasn’t my fault’, Jess explained.

‘When I had the implant put in – because I already had breast tissue there they kind of didn’t need an implant that big but we didn’t know until they were in so I feel so much better now – I can wear more things.

‘Even shooting the Pour Moi range I could actually fit into the bikini tops and the bras, which was lovely.’ 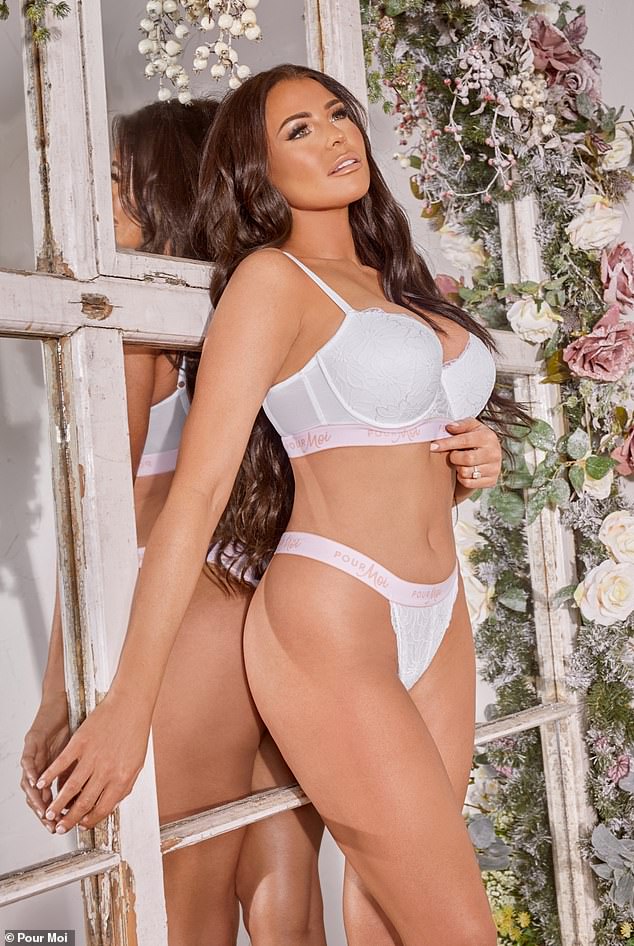 ‘I’d just look puffy’: Jess said she wants to avoid going down the ‘filler route’ and believes making severe changes to her face in the future won’t suit her 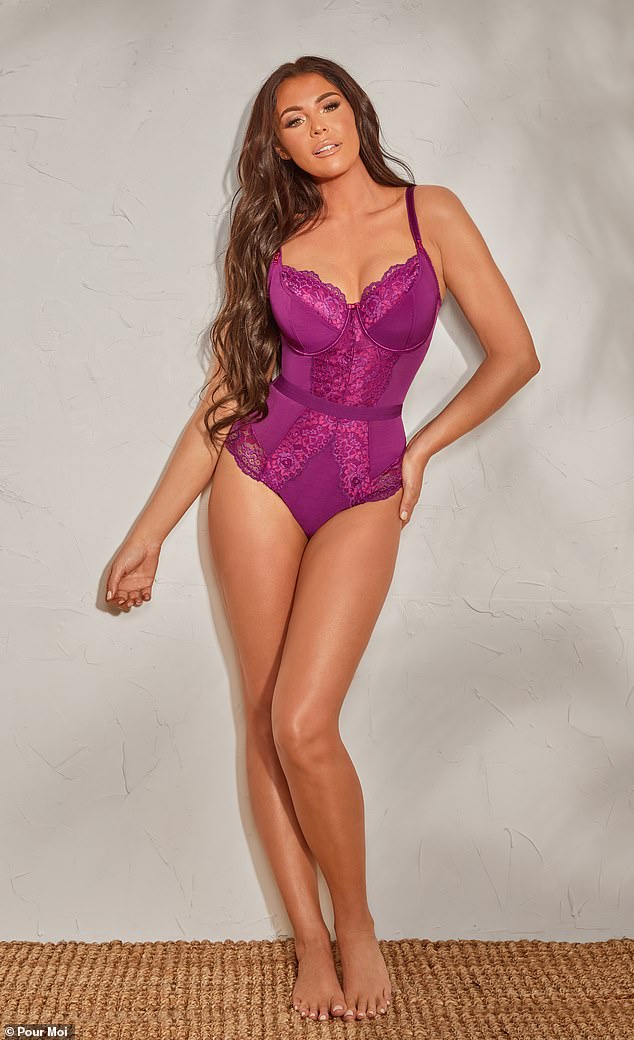 ‘We are hoping and praying it can still happen’: Jess is due to tie the knot with businessman William Lee Kemp, 37, this June in Majorca

Jess is due to tie the knot with businessman William Lee Kemp, 37, this June in Majorca.

She hopes after not being able to celebrate her engagement due to Covid restrictions that her family – including brothers Mark, 34, and Josh, 31 – will finally be reunited on her big day.

She said: ‘We are hoping and praying it can still happen. We are waiting for Boris to make announcements, it has just been a constant waiting game but we hope that a crappy engagement year will mean a very good marriage.

‘The cases and the deaths are a lot lower now so please God we are coming out the other side.

‘My family are all hoping for that reason as well that we all get to do it, so we can all be together again, so lets just hope and pray.

‘It will be crazy to think there will be so many eyes on me – there is a lot of pressure but ultimately I just want to marry my fiancé and be happy.’ 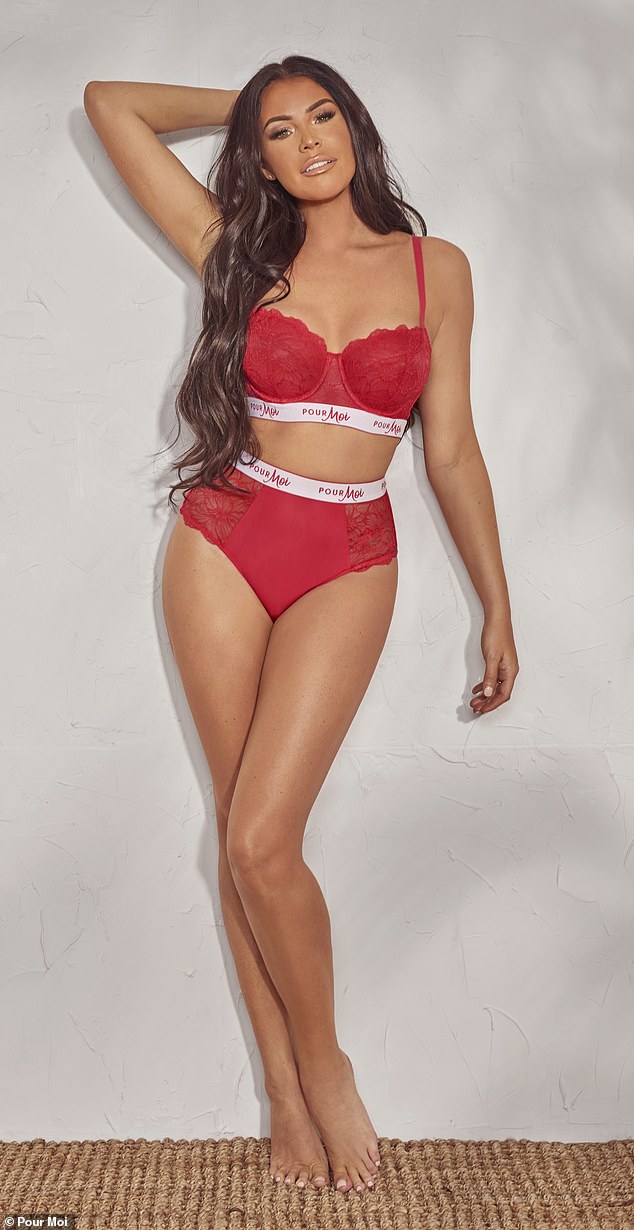 ‘We can all be together again’: She hopes their big day will double up as a family reunion after Jess and her loved ones spent months forced apart last year as a result of the pandemic

Jess hinted she could be filming the build-up to her wedding for a TV series and fans of the Wright family including Mark’s wife and bridesmaid Michelle Keegan, 33, will be seeing more of them in the near future.

She said: ‘All I can say is watch this space and potentially there could be something coming… you might be seeing a lot more of the Wright family this year. Lets wait and see…

‘I would almost want it to be informative and helpful as well and not just following me on a day-to-day basis but I don’t know never say never.’

Jess has collaborated with Pour Moi on a brightly coloured lingerie and swimwear collection for spring/summer.

The new line includes some pretty lace bridal sets she hopes to wear when she weds fiancé William in a few months’ time. 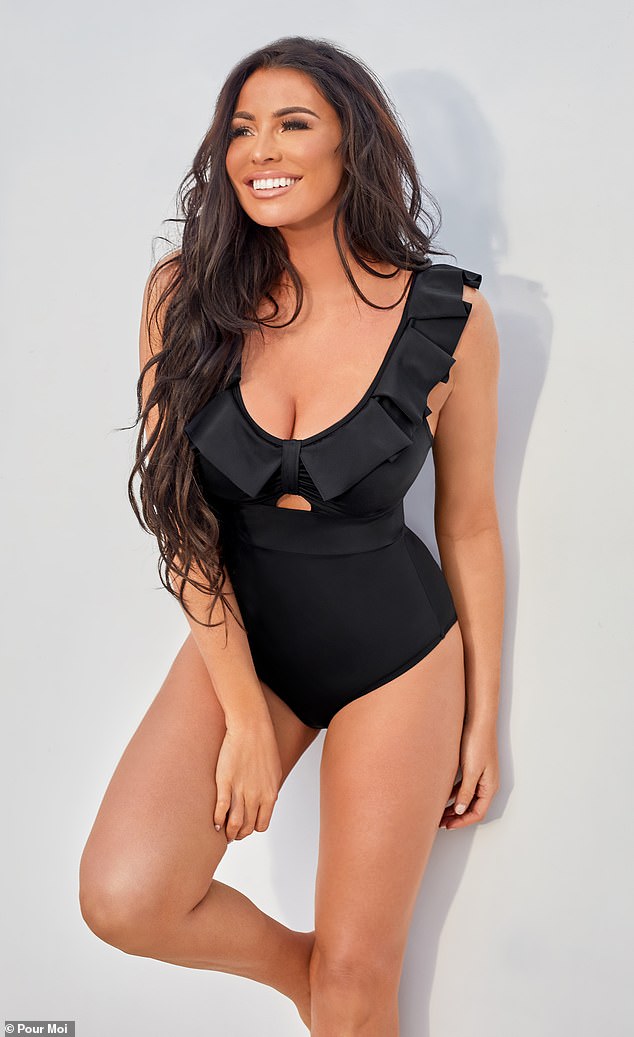 ‘Watch this space’: Jess hinted she could be filming the build-up to her wedding for a TV series and fans of the Wright family will be seeing more of them this year 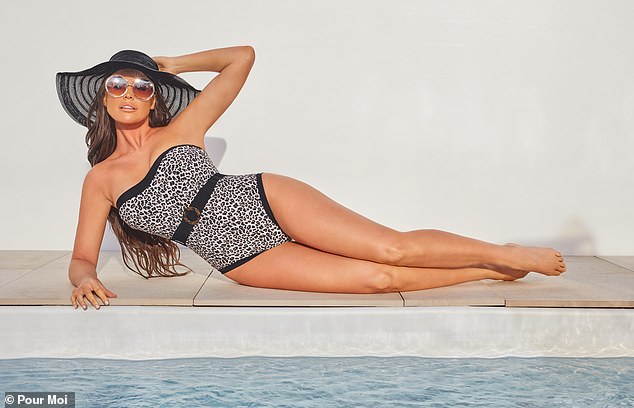 ‘Never say never’: After rising to fame on TOWIE, Jess said she would agree to cameras filming her for a new fly-on-the-wall series if it was ‘the right kind of show’

Speaking about the collection, she said: ‘I never feel really confident on shoot but I did feel confident and a few people said they thought I had lost weight and I looked great, which was nice.

‘But to be honest it is all about what you wear to suit your body and the benefit of Pour Moi is that everything is so well suited for a woman with curves and shape and the quality is amazing as well and I feel like that had a lot to do with it.

‘The quality and the design are so nice and girly and wearable for all sizes. I love the swimwear and it made me really excited for the summer, the pieces are so wearable and are gorgeous colours, I also love the bridal underwear set, which made me so excited to be a bride and to wear it on my wedding day.’ 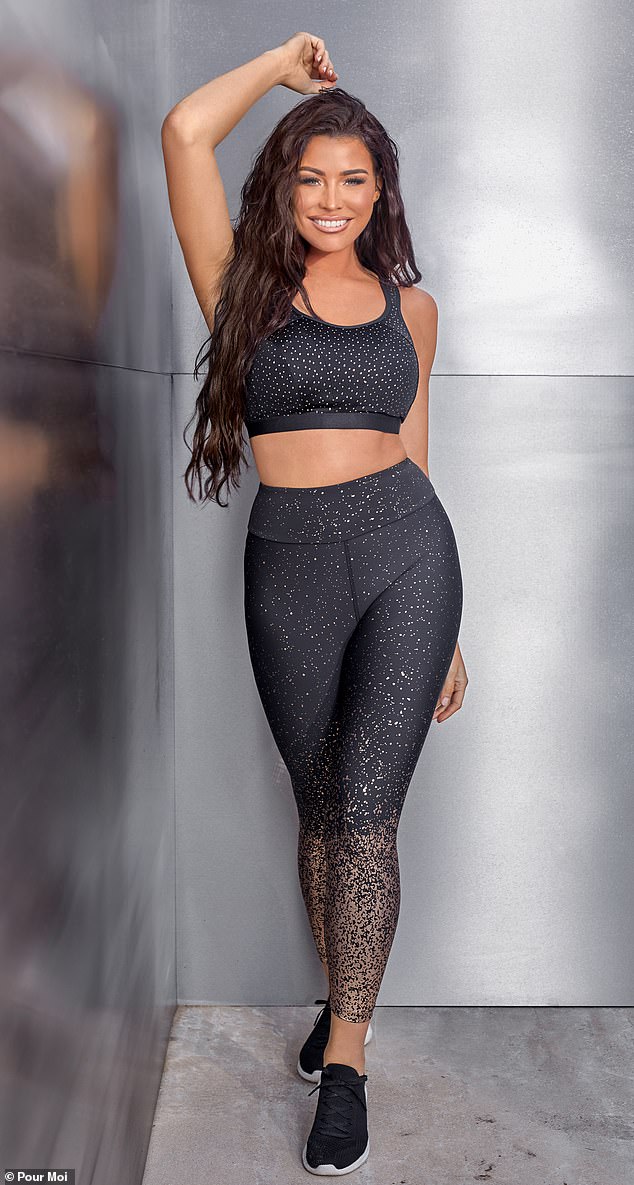 ‘The quality is amazing’: Jess told MailOnline her new Pour Moi collection that features lingerie, swimwear and workout gear is ‘well suited to a woman with curves’