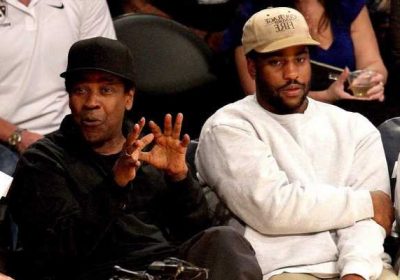 The ‘Tenet’ actor gets candid as he talks about his previous career as a young promising athlete, admitting he played sports to get away from his famous father’s shadow.

AceShowbiz -“BlacKkKlansman” star John David Washington tried to escape his movie star dad Denzel’s fame by getting roughed up on the football field.

The actor, who played football professionally for the St. Louis Rams, Rhein Fire, and Sacramento Mountain Lions before winning acclaim for his role in Spike Lee‘s 2018 drama, struggled in his early days on screen, because he always felt overshadowed by his father’s fame.

“That’s probably why I played so long, and suffered so many concussions, in football,” he tells Deadline, admitting he took too long to hang up his boots and face the challenges of joining the family business.

“A lot of the time we see athletes who, when they lose their ability to play, they lose their identity. That’s something I can very much relate to. Football was my identity for so long.”

“When I realised there was no escaping it (Denzel’s name), I was able to relax into my life and enjoy what I wanted to do.”

And now that he’s won rave reviews for roles in “BlacKkKlansman”, “Tenet“, and this year’s (21) pandemic hit “Malcolm & Marie“, opposite Zendaya, John David is much more confident.

“It’s more of a question for people I’ve gotten to work with, whether they hired me because of who I’m related to,” he notes, adding that he’s pretty sure he’s proved his skills by now.

“It certainly didn’t feel that way,” he smiles.

Meanwhile, Denzel Washington said in a 2018 interview that he’s glad his son quit football. The actor was worried about his son because he suffered countless concussions as an athlete.