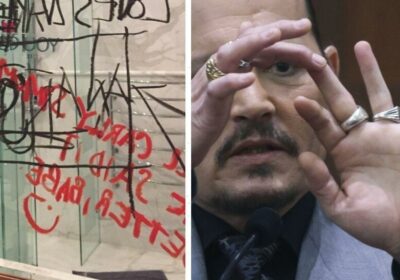 At the court in Fairfax, Virginia, where Johnny Depp’s $50 million defamation case is taking place against ex-wife Amber Heard, photos were shown of the messages he’d scrawled across the walls and mirror in his own blood. In his testimony, Johnny portrayed his thoughts and feelings about the episode, and an audio recording was also heard of Amber begging him not to cut himself, after he asked her to use a knife on him.

When asked by lawyers what he was writing on the mirror, he replied: “Little reminders from our past that essentially represented lies that she had told me and lies that I had caught her in.”

The court was reminded of the comments he made during his 2020 defamation trial against The Sun by Amber’s lawyer, Ben Rottenborn.

He’d stated of the incident: “I recall painting on a lampshade, on a wall, on a mirror.

“I remember dunking my finger into paint thinner and using paint when I had run out of blood to paint with, and I could have defaced the painting I suppose, but I do not remember a painting specifically.”

Mr Rottenborn added that a window had been smashed that night, and claimed that Johnny had scrawled a penis across the painting.

However, Johnny countered that it was something Amber could have done.

He added that doing so was not “on top” of his mind.

The Pirates of the Caribbean star added that, after the harrowing incident, he had texted his doctor from a hiding place in the bathroom, asking him what to do.

This week, showing his apparently still “deformed” finger to the court, he compared it to the Italian volcano “Vesuvius” and said his bone was left completely “crushed”.

He also addressed how Amber reacted towards him after he lost his finger-tip, which was eventually found by his doctor on the kitchen floor.

“It was almost like white noise, just someone yelling,” he claimed.

“It was just a high pitched constant attack of insults, it was just jumbled words to me in a very high frequency and I was in a bit of shock.”

On Thursday, the court also heard audio footage of an occasion when Amber had begged him: “Please, don’t cut yourself, please don’t. You’re going to hurt yourself.”

She added that the knife would be too “dull” to cut through his skin.

The court also observed text messages where he’d referred to her as an “idiot cow,” a “worthless hooker” and a “filthy whore.”

In an exchange between himself and actor Paul Bettany, he’d graphically discussed drowning and burning Amber, and then defiling her dead body.

Paul replied: “Having thought it through I don’t think we should burn Amber …”

However Johnny replied even more graphically, stating: “Let’s drown her before we burn her!!! I will f*** her burnt corpse afterwards to make sure she’s dead.”

However, in other messages written to Amber on separate occasions, Johnny appeared contrite, speaking of his “shame” and “regret” and telling her: “I love you and feel so bad for letting you down.”