’32 years married to this alpha female’: Jonathan Ross shares romantic tribute to wife Jane Goldman on their anniversary and reveals they ‘celebrated with Marmite on toast’

He exchanged vows with the screenwriter, Jane Goldman in 1988.

And Jonathan Ross celebrated 32 years of marriage on Sunday by sharing a sweet throwback picture of his pink-haired wife, 50, on Instagram on Sunday.

The talk show host, 59, wrote: ‘Today I have enjoyed 32 years married to this Alpha Female. We celebrated with Marmite on toast. Here’s to 32 more!’ 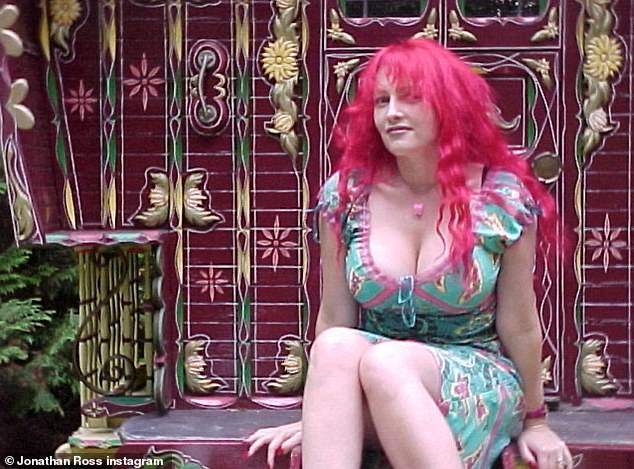 Anniversary: Jonathan Ross shared a romantic post to his wife Jane Goldman as they celebrated their 32 year wedding anniversary on Instagram on Sunday

He shared the snap of his wife perched on vibrant gypsy wagon wearing a kitsch yet chic turquoise and pink dress which showcased her curves.

Jane accessorised with a hot pink pendant and watch that complemented her eye-popping fuchsia tresses which she styled in a natural beachy wave.

The English rose opted for a natural makeup look that highlighted her delicate features as she posed for the snap. 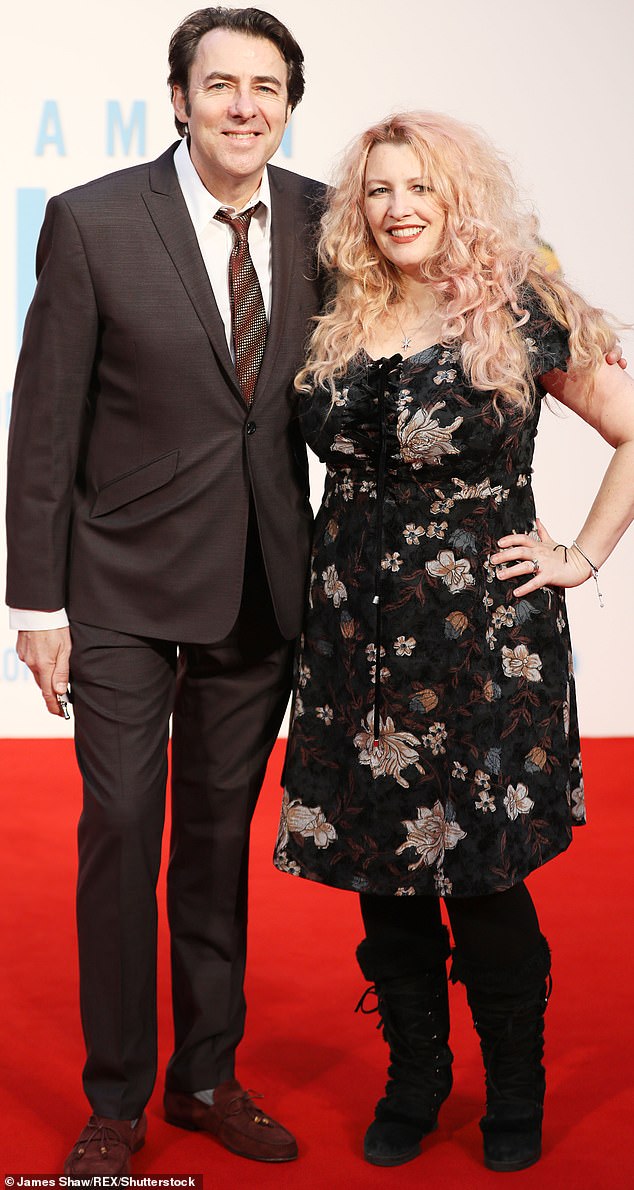 Wedding bells: The host of The Jonathan Ross show, 49, exchanged vows with his screenwriter wife, 40 in 1988 and the pair have been inseparable ever since (pictured in 2017)

Jane is a woman of many talents as she works as a screenwriter, author and producer.

She has co-written screenplays for the Kingsman: The Secret Service, and X Men: First Class, and she accomplished her first solo screen play with the 2012 film, The Woman In Black.

Jane met her husband-to-be when she was 16-years-old at an event when she was a budding showbiz journalist and they married two years later.

Jonathan-who is almost ten years her senior-was at the beginning stage of his talk-show hosting career and struck up conversation with the young journalist.

She told The Times: ‘I met Jonathan at some sort of promotional event. 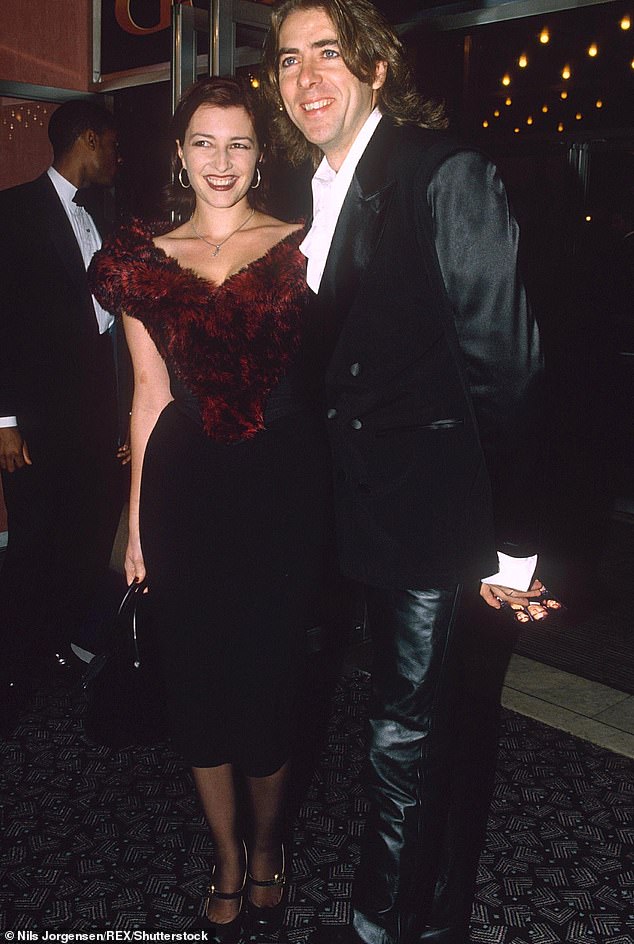 Love at first sight: Jane (pictured in 1995) revealed that she met Jonathan when she was 16 years old at a promotional event and her husband-to-be struck up a conversation with her

‘He’d just started his show The Last Resort. He’d only been doing it for two weeks, I think.’

The pair share three children together, Betty, 29, Harvey, 29, and Honey, 23, who is apparently very curious about the details of their first encounter. 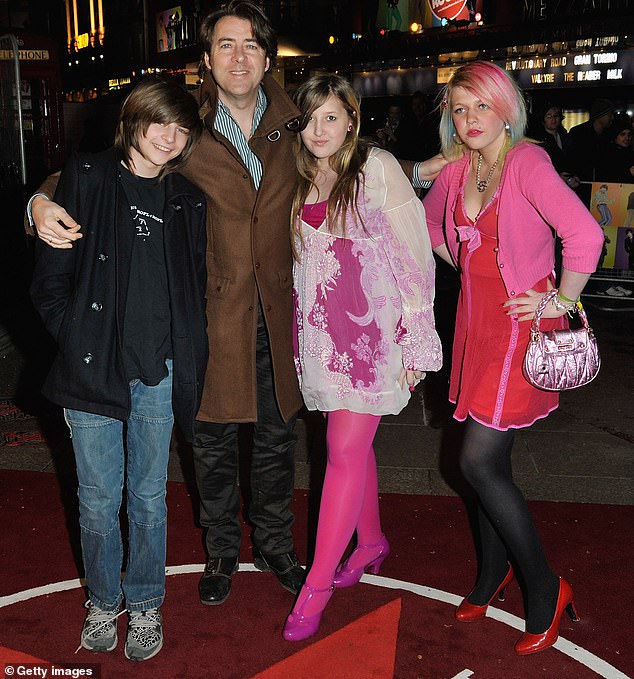 Family: The couple share three adult children, Betty, 29, Harvey, 29, and Honey, 23, who have joined their father on plenty of red carpets (as pictured in 2009)

‘I think I invited him to some other thing, hoping to see him again. Maybe I was less socially awkward back then.’

Despite not remembering their initial conversation, Jane recalled that the couple connected through their love of American pop culture, science-fiction and horror films.

For Jonathan, there is only one leading lady in his life and that will never change.

He said: ‘Jane’s my ideal, whatever way she is. We’ve grown up together and I become more passionate about her as the years go by.

‘For me, it’s only ever been Jane and it only ever will be.’ 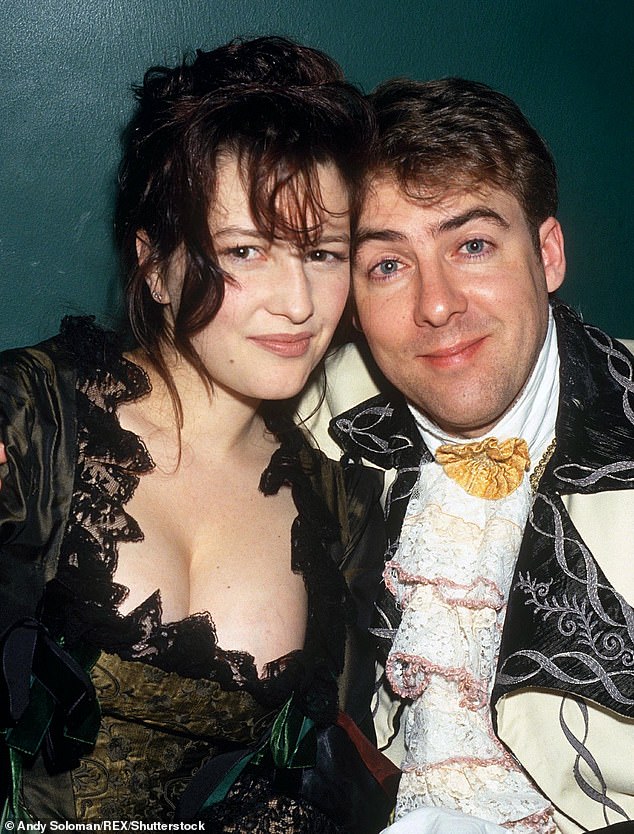 Mutual interests: The married pair (pictured in 1990) bonded over their love for sci-fiction and Jane has co-written screenplays for hit films in the genre such as X Men: First Class