Jude Law enjoys a stroll with daughter Iris and his baby 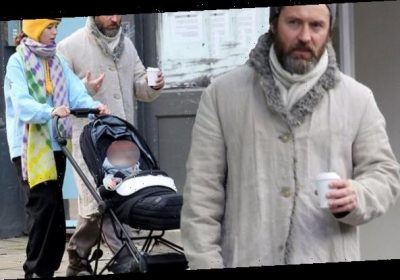 Jude Law, 48, enjoys a stroll with daughter Iris, 20, and his three-month-old baby as he is seen for the first time since Fantastic Beasts 3 filming halted

Jude Law was pictured for the first time since filming for Fantastic Beasts 3 was shut down after an outbreak of coronavirus among the cast and crew.

The actor grabbed a coffee as he headed out for a stroll with his daughter Iris, 20, and his three-month-old baby in London on Friday.

Father-of-six Jude, 48, covered up his new ponytail in a grey beanie, while his model daughter rocked a bright yellow batman hat. 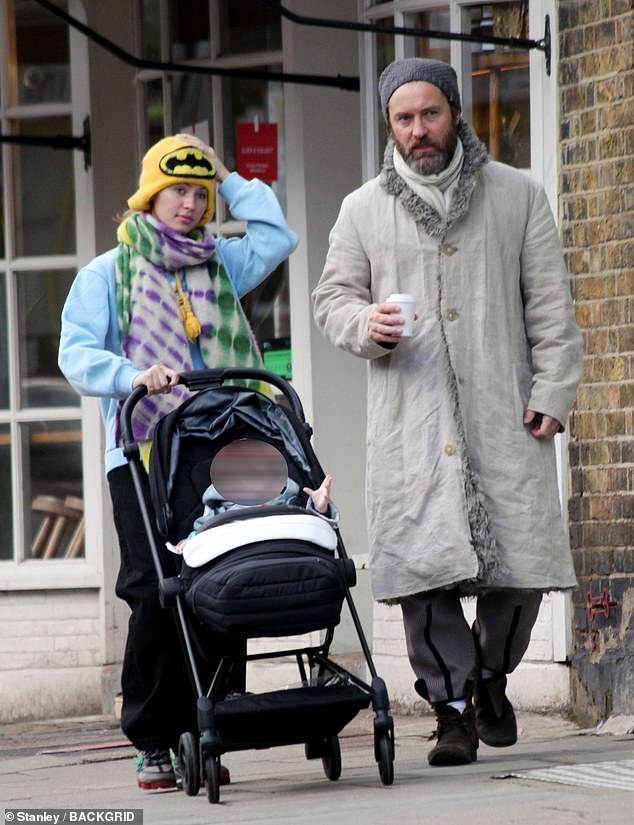 Free time: Jude Law was pictured for the first time since filming for Fantastic Beasts 3 was shut down after an outbreak of coronavirus among the cast and crew

Jude, who portrays Albus Dumbledore in the Fantastic Beasts franchise, cut a casual figure in a long beige coat and grey joggers, while Iris donned a blue hoodie and a tie-dye scarf.

The pair appeared in good spirits as they chatted away with Iris pushed Jude’s youngest child in a pram. 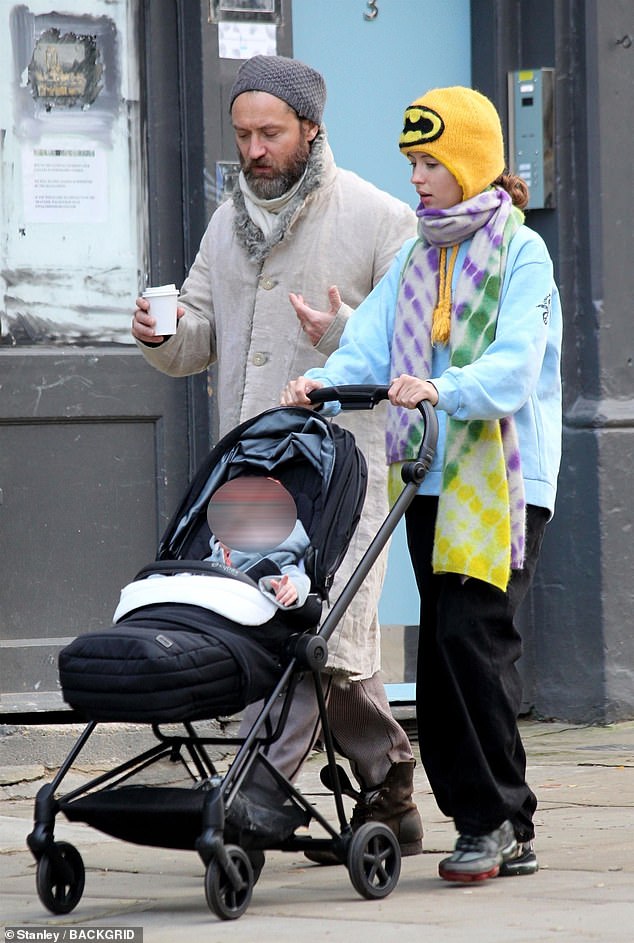 Doting dad: The actor grabbed a coffee as he headed out for a stroll with his daughter Iris, 20, and his three-month-old baby in London on Friday

A source at the Leavesden studio said film bosses are not revealing who among the cast and crew has contracted the virus. In September the dialect coach on set got it, but filming continued.

The source suggested that while crew can be replaced, for production to be suspended a principal member of the cast involved.

‘Production is only halted if someone cannot be filmed. No one is saying who it is, but it’s someone who cannot be replaced,’ said the insider. 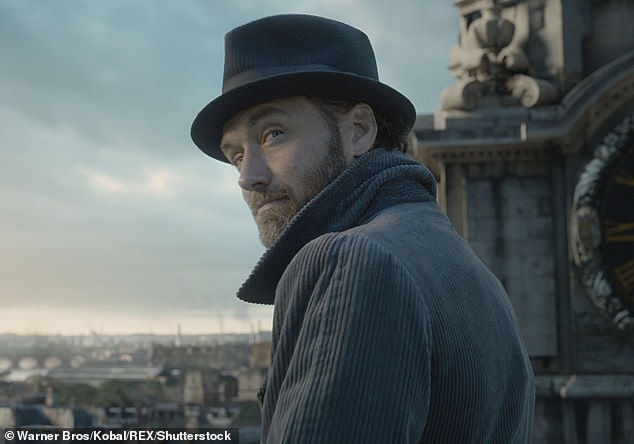 Concerns: The sighting comes after Warner Bros temporarily halted filming for the third Fantastic Beasts film due to a Covid outbreak (Jude in The Crimes of Grindelwald 2018) 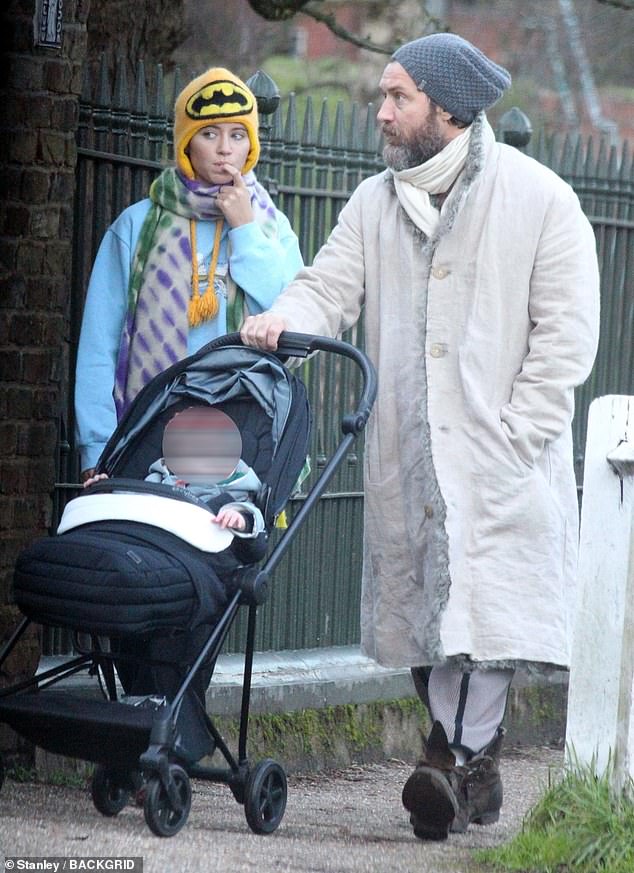 Keeping warm: Father-of-six Jude, 48, covered up his new ponytail in a grey beanie, while his model daughter rocked a bright yellow batman hat

‘The studios have been one of the most secure Covid places since they reopened so there are real fears that it is the South African variant that has got through.

‘Everyone is assuming that it is the South African variant and that is all they are talking about.

‘All production of the film set for Fantastic Beasts 3 has been shut down. We don’t know when we will be back.’

Jude and his wife Phillipa Coan, 36, have not revealed the name or gender of their child, but the actor confirmed he had welcomed his first child with his wife of nearly two years in September.

The screen star revealed the happy news during an interview with Jimmy Fallon on The Tonight Show.

When asked what he’s been up amid quarantine, the thespian said: ‘I’ve been gardening. Oh! And on top of that I had a baby. So there you go.’

The media personality shared that he and brainbox Phillipa felt ‘blessed that they could just nest as a family.’ 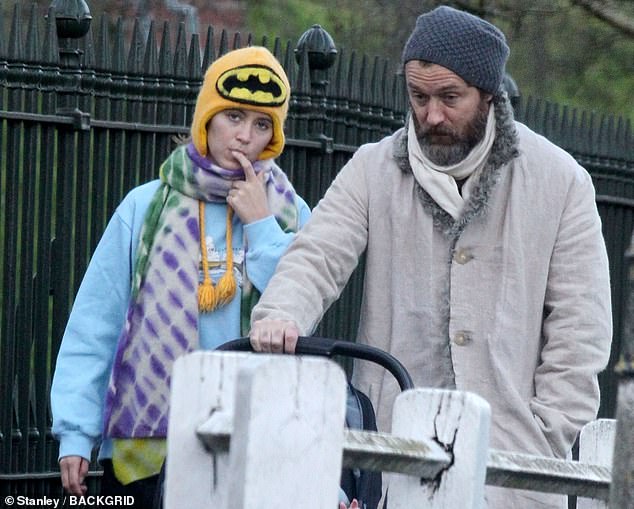 Casually-clad: Jude cut a casual figure in a long beige coat and grey joggers, while Iris donned a blue hoodie and tie-dye scarf

Jude and Phillipa were first spotted together at the Hay literary festival in 2015, and married at Old Marylebone Town Hall in 2019 before partying in Mayfair – three months after he announced their engagement.

After the baby news came to light, a friend of the pair said: ‘He and Phillipa are blissfully happy together and delighted to add to their family. Everyone is really excited for the new arrival.’

Jude was previously married to actress and designer Sadie Frost, but the pair divorced in 2003. They have three children – Rafferty, 24, Iris and Rudy, 18.

He also has daughter, Sophia, 11, with model Samantha Burke, and another daughter called Ada, five, with singer-songwriter Catherine Harding.

Who are Jude Law’s children? 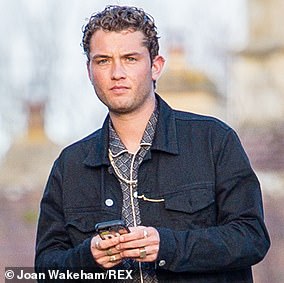 Rafferty is Jude’s oldest child, born on 6th October 1996 from his marriage to Sadie Frost, which ended in 2003 after six years.

He’s most well-known for his work as a model, posing for designers including Dolce & Gabanna and Timberland.

He’s also set to follow his father’s acting footsteps, by starring in a remake of Charles Dickens’ Oliver!, titled Twist as the titular hero.

Rafferty dated singer Rita Ora for three months after they met while filming Twist in 2019, but split in February 2020 after ‘drifting apart’.

In October it was also reported that he was pictured kissing Brooklyn Beckham’s ex-girlfriend Hana Cross. 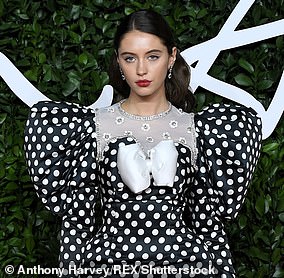 Glamorous: Iris is Jude’s oldest daughter from his first marriage to Sadie Frost

Iris is Jude’s oldest daughter, born on 25th October 2000 during his first marriage to Sadie.

Alongside a huge Instagram following, she has also carved out a career as a model, posing for brands including Miu Miu and Burberry.

She’s been dating Jyrrel Roberts since 2018, and the couple have been seen together at numerous events.

Iris previously credited her famous parents with giving her a normal childhood despite their A-list status. 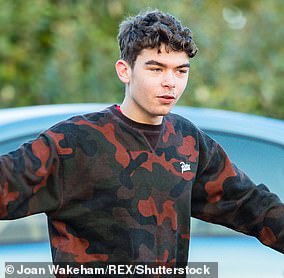 Teen: Actor Rudy is Jude’s youngest child from his first marriage to Sadie

Rudy is Jude’s youngest child from his first marriage to Sadie, born on 10th September 2002.

He’s followed in his father’s footsteps by choosing to be an actor, and starred in the short film Dotty in 2013.

Rudy celebrated his 18th birthday in September with a family celebration, joined by his dad Jude, mum Sadie and siblings Iris and Rafferty.

Jude’s fourth child Sophia came from a brief relationship with model Samantha Burke in 2008, and she was born in September 2009.

It’s thought his daughter was conceived when he and Samantha met in a nightclub in New York while he was filming Sherlock Holmes.

Jude was first pictured with his daughter when she was just five months old, with Samantha previously claiming he’d refused to meet her.

The actor previously refused to reveal the identity of Sophia’s mother, and reportedly called for a DNA test to ensure the child was his.

Ada was Jude’s fifth child from his relationship with singer Catherine Harding, also known by her stage name Cat Cavelli, and she was born in March 2015.

Cat was 23 when she dated Jude, then 41, who was filming on location in the Czech Republic as he grew close to the aspiring musician.

The actor was previously praised by Cat for being a hands-on dad months after Ada’s arrival.

She told The Mirror: ‘She looks like Jude massively, she doesn’t look like me. Jude is really funny and sweet. I remember last week he came over and he had to change her on the park bench. He cleaned her all up.

‘He is a good dad and she sees her brothers and sisters. He takes her out all the time.’ 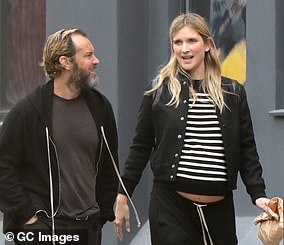 The actor is yet to reveal the name or gender of his new baby, but has been seen with the tot.

Jude confirmed he’d welcomed his sixth child in September, telling Jimmy Fallon: ‘When asked what he’s been up amid quarantine, Jude said: ‘I’ve been gardening. Oh! And on top of that I had a baby. So there you go.’