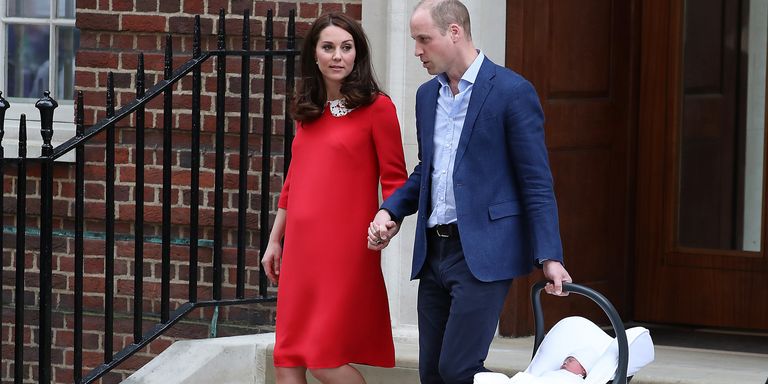 The Duke and Duchess of Cambridge had a rare display of affection today while presenting their newborn son to the world. After posing for photos for the baby’s initial debut in front of the hospital, the couple re-emerged with their child before the crowd, ready to drive back home to Kensington Palace. That’s when Prince William grabbed Kate Middleton’s hand (while holding the new royal in a baby carrier in his other hand) as they went down the steps on the way to their car.

Unlike Prince Harry and Meghan Markle, the Duke and Duchess of Cambridge rarely hold hands in public, mostly because they’re on the job as working royals during their official public appearances.

Today, however, the proud mom and dad couldn’t help but feel the love while showing their youngest off to the world.

Earlier in the photo call, William was also seen putting his hand on Kate’s back while she carried their newborn in her arms.

The last time royal fans caught the Duke and Duchess sneak in some subtle PDA was at St. Patrick’s Day, when Prince William was also seen putting his hand on Middleton’s back.

To be clear, there’s no definite, written protocol stating that royal couples can’t hold hands or embrace in public. However, William and Kate are less likely to do so because they’re “working representatives of British Monarchy” and want to “remain professional,” etiquette expert Myka Meier told People in 2016.

But ultimately, it depends on the event. “It is rare to see royal couples holding hands on official outings,” Meier later told People in 2017. “While we are much less likely to see The Duke and Duchess holding hands in public, we often see Prince Charles and The Duchess of Cornwall holding hands – it’s all simply a matter of preference for each couple and is also likely dependent on the nature of the event they are attending. A more serious engagement would warrant a more serious level of professionalism, which each royal is sure to follow.”

Celebrating the birth of their third child is certainly an occasion worth getting affectionate for.