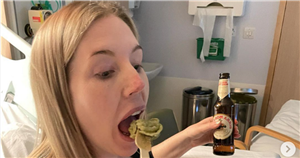 Katherine Ryan’s husband Bobby Kootstra has posted an image of the star drinking a bottle of beer and eating guacamole after their newborn son's birth.

The writer and comedian gave birth to the baby, who is her second child and the couple's first together, at the famous Lindo Wing at St Mary’s Hospital in London earlier this month.

After keeping her pregnancy under wraps until the final weeks, Katherine revealed she had welcomed the new baby, named Frederick, on 14 June.

And in a hilarious new post for the Netflix star’s 38th birthday, Bobby penned: “Happy Birthday to the best wife and mum! Xx @kathbum.

“We are all so lucky:) Things have hardly changed… #loveyou," he added.

Bobby posted the pic alongside a throwback image of them looking utterly gorgeous as they lounged and sipped on drinks during a luxury holiday, as Katherine wore a white, sheer dressing gown and lingerie.

And in the next snap, Bobby revealed the reality of his wife now, enjoying some treats in a hospital bed whilst cradling her newborn son at the same time.

“Catfished you good,” Katherine teased in the comments.

The couple are childhood sweethearts from her time growing up in Canada. After reconnecting decades later, the duo entered into a civil partnership in 2019.

The pair opted to have their ceremony in Denmark, giving the reason that it was their “quickest and easiest” option.

Recently Katherine shared her own tribute to Bobby, posting an adorable of him with their baby boy.

“Happy #FathersDay to all the hunky dads,” she said, with a wink. “Thinking of you every single night.

“But especially to this one @bobby_k__ – the best of them all & the one whose babies I wanted since the moment I laid baby eyes on him. We are so lucky to have you BK.”

Fans were also overjoyed when the actress posted a then and now of her holding her daughter Violet after she was born and then with little Frederick.

In a heartwarming post, Katherine gushed: “Little girl with my big girl June 2009. Big girl with my little boy June 2021.

“Happy Birthday, Violet – to your secret account – You are my sun & my moon & my stars.

"When I had nothing, I had you and I had everything. Fred is ok too,” the star quipped.