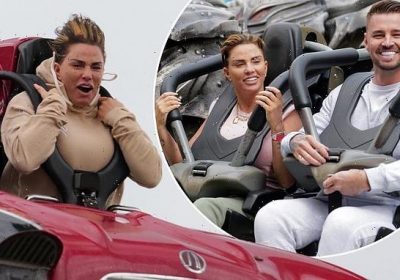 Katie Price left her diamond engagement ring at home on Friday as she and her fiancé Carl Woods enjoyed a day out at Thorpe Park.

The former glamour model, 42, beamed from ear to ear as she and her Love Island star partner took to the rides at the Surrey-based theme park wearing casual attire.

Katie opted for a beige hooded jumper which she paired with a green tracksuit bottoms and multi-coloured trainers while she went ring free to ensure her seven-carat diamond did not get lost amid the thrills. 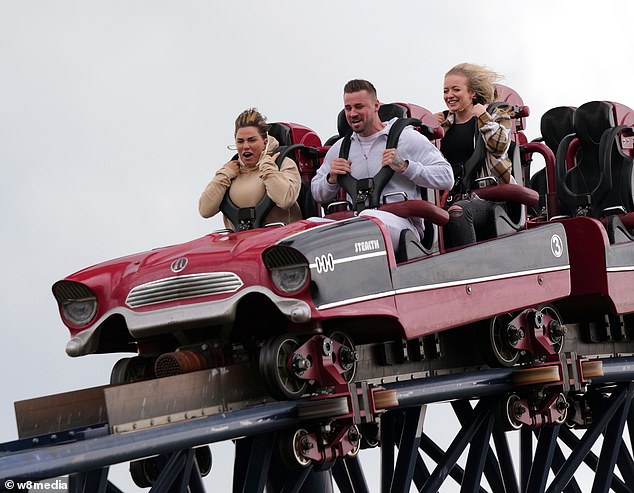 Riding high:  Katie Price left her diamond engagement ring at home as she and her fiancé Carl Woods enjoyed a day out at Thorpe Park on Friday

Katie paired her casual look with a chunky gold necklace but her diamond, which she has yet to unveil, was left safely at home.

For the theme park trip, Carl also opted for comfort as he wore matching grey tracksuit top and bottoms with a pair of bright white Nike trainers.

The mother-of-five, who has been engaged eight times, pulled some hilarious expressions as she was thrown around by the rides.

The pair tackled some of the park’s biggest rollercoasters, smiling together as they waited in the queue to get on. 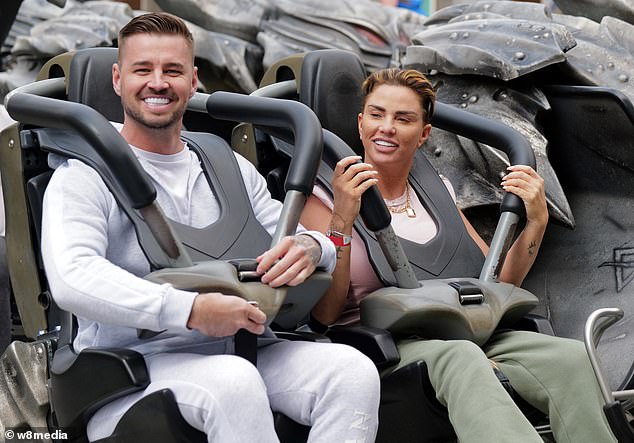 Ready to go: The pair were seen smiling from ear to ear throughout the day as they hopped on board a variety of different rollercoasters and rides 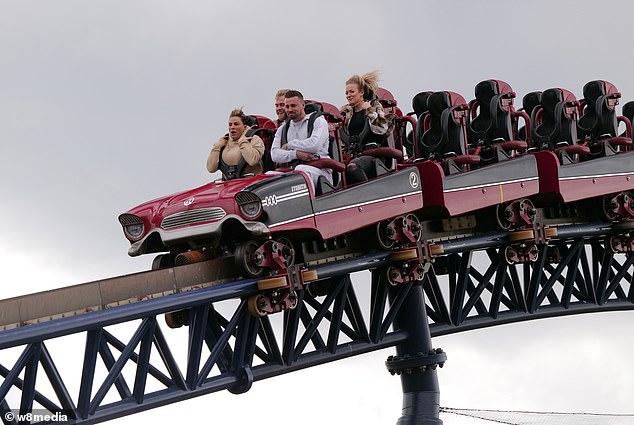 Brace yourself: For the thrill-seeking day Katie wore a beige hooded jumper with green tracksuit bottoms and multi-coloured trainers 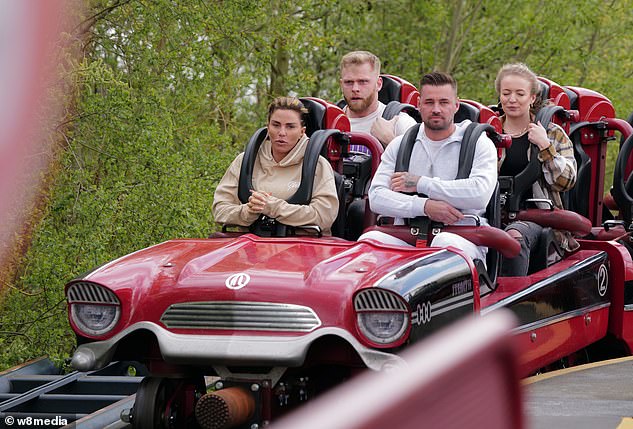 In shock: The pair, who visited the theme park with some friends, looked shaken up after their ride on one of the rollercoasters

On Stealth, which is the UK’s fastest rollercoaster and propels riders more than 200ft in the air, Katie appeared to scream as Carl looked red-faced.

The thrill-seeking couple, joined by some friends, also rode a variety of other coasters and adrenaline-filled rides.

Their outing comes after news last week that Carl has put in an offer for a £800,000 property for the TV star and her children to live in while her ‘mucky mansion’ makeover is completed.

Katie is currently renovating her property and plans to live there with car dealer Carl and her kids when it is completed. 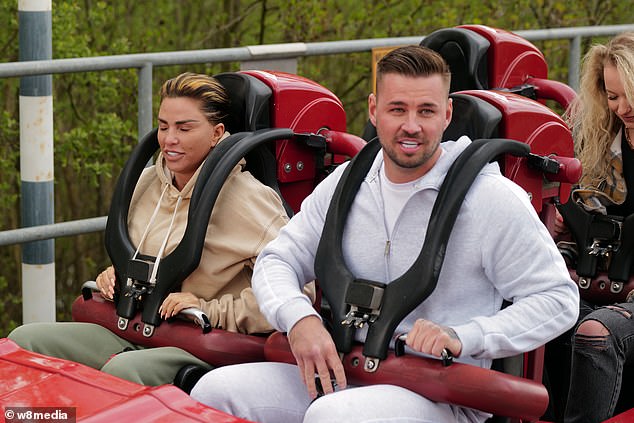 No ring: Katie opted to leave her new seven-carat diamond engagement ring at home for the trip 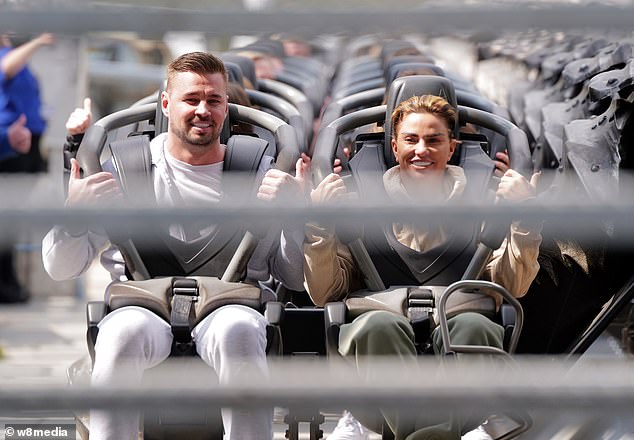 Brave faces: For the day trip, Carl wore a matching grey tracksuit with a pair of white Nike shoes. Pictured: The pair brace themselves for the next rollercoaster 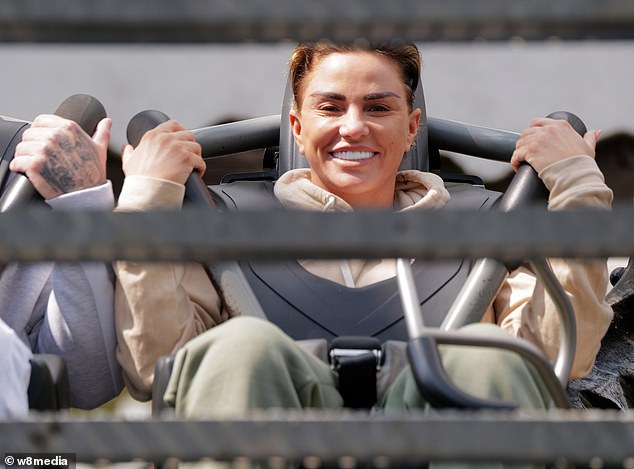 Child-free fun: The mother of five enjoyed spending the day with her new fiance who proposed to her last month 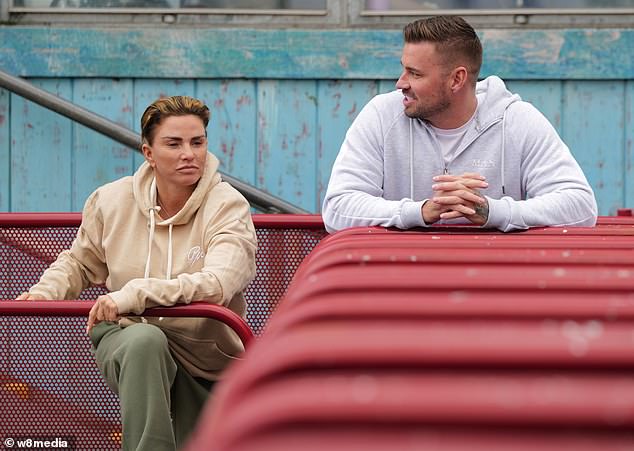 Waiting in line: Their outing comes after news last week that Carl has put in an offer for a £800,000 property for the TV star and her children

Until then, Katie and her brood will live at Carl’s new stunning Essex pad, which he will later rent out in the hopes of turning it into a business venture.

A source told MailOnline: ‘Carl has put in an offer on the property but nothing has been accepted yet.’

The huge property has been freshly renovated ahead of their move and boasts three reception rooms, five bedrooms and two bathrooms.

The possible move comes following Katie and Carl’s engagement after 10 months together. 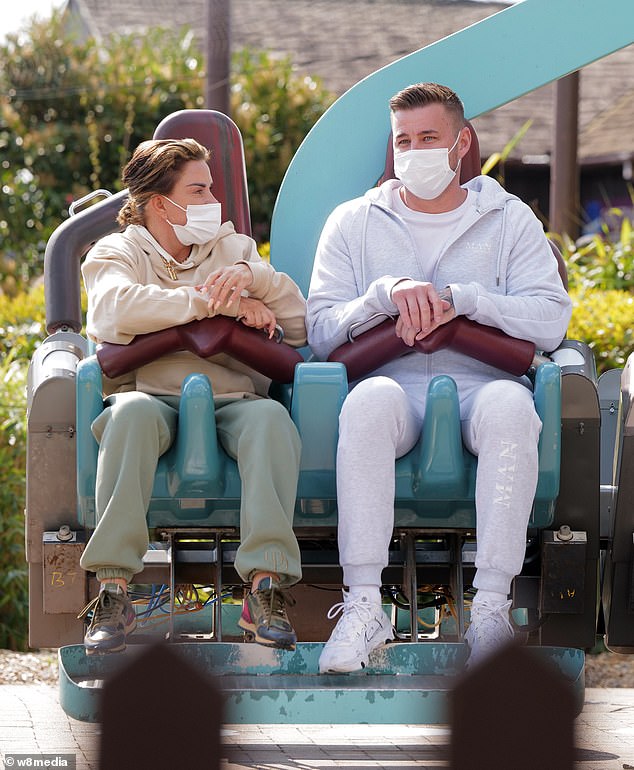 Loved up: Katie and Carl announced their engagement late last month as Carl proposed after just 10 months together 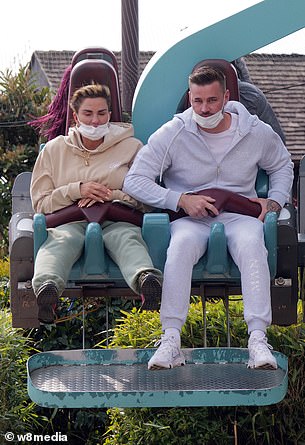 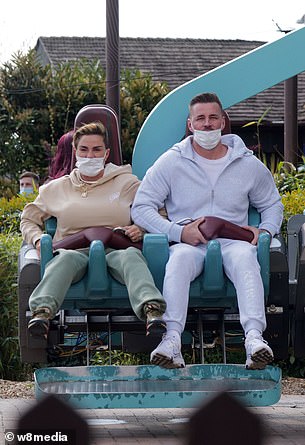 Buying houses: Katie is currently renovating her property and plans to move back in with car dealer Carl and her kids when it is completed, meanwhile they are reportedly moving into a £800,000 home he bought for her 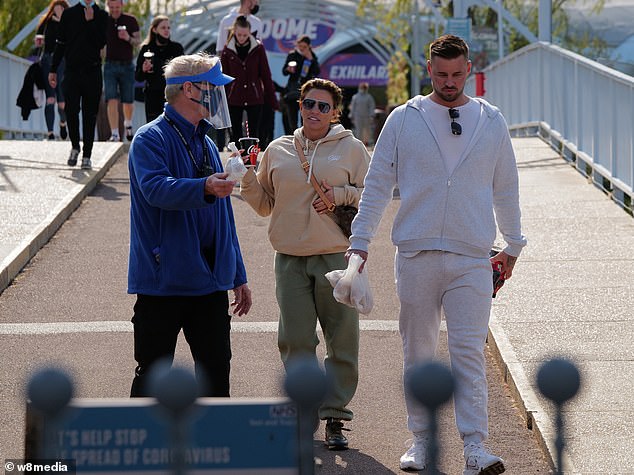 Sweet treats: As they entered the park, the pair, carrying drinks and treats, appeared to be assisted by a member of staff wearing a protective visor

Katie has previously spoken of how she loves that Carl makes his own money and bought her ring, unlike some of her previous suitors.

Speaking to OK! Magazine, she said: ‘I didn’t have to buy my own ring this time!

‘It was made from scratch and came out of his own money. He designed it – it’s really special. It’s like a fairy-tale ring and massive.

‘It’s like something out of Hollywood. It’s more than I could dream of.’

Katie is mum to Harvey, 18, from her relationship with Dwight Yorke. While she welcomed children Junior, 15, and Princess, 13, with ex-husband Peter Andre. 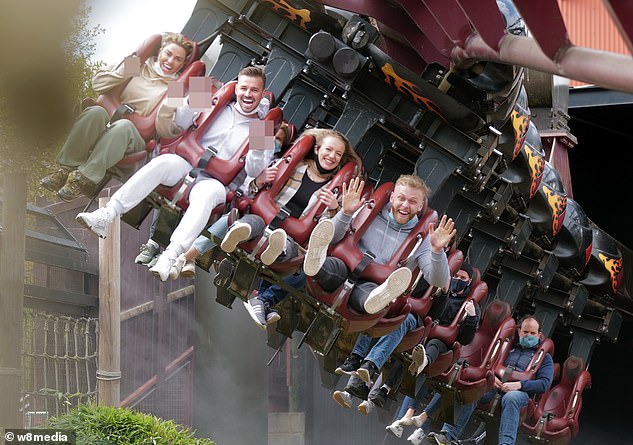 Say cheese: The pair were spotted on another ride with their friends, pulling faces and making hand gestures