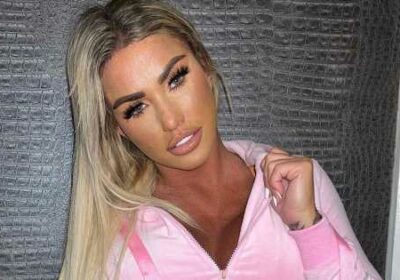 Katie Price has launched a new OnlyFans sale, offering her raunchy photos at a half price discount.

The former glamour model and reality TV star, 43, is offering topless shots for £6 and pay-to-view snaps to existing members for as little as £3.

The star was rumoured to have gone on a holiday over the Easter break with Carl Woods, who she allegedly called off her engagement to weeks previously.

Katie was offering fans the chance to sign up to her page for just £5.50 a month, instead of the usual subscription price of £11 – and has been offering deals such as her ‘topless Saturdays’ promotion where she offers pics for £6.

The mum of five joined the content sharing platform in January this year in a bid to “take back control” of her content.

Appearing at a press event for the launch of her channel, the star dressed as a nun as she told media, including OK!: “I’ve come dressed as a nun today because I am innocent in a lot of things. I’m focusing on enjoying my life, new year, new start, no one is here to dictate me I’m in full control of my whole life.

"Doing my only fans channel is something I was born to do I’ve done it for years and years it’s all I know. You all know I’m bloody good at it because that’s what’s made me.

"I think my body is valuable, I own it, my rules my body and I want to dictate. There are so many young girls doing this and I’m embracing myself. I’m a feminist."

She concluded: "There’s a whole new world into only fans, I’ve been thinking about it for a while, it’s about empowering women. Girls do sexy stuff but there’s more sexy stuff on google. It’s an insight into my life. I’m doing my own show within that."

It comes after the star was rumoured to be heading off on a break with Carl Woods, after the couple allegedly split a few weeks ago.

The duo were seen walking through Gatwick Airport hand-in-hand in pictures obtained bythe Mirror , following trips earlier this year to Thailand, Belgium and the New Forest for Valentine’s Day.

Seemingly showing the world their romance could be back on, they looked relaxed as they enjoyed being in each other's company and got ready to head off on what appeared to be a super-secret Easter getaway.

Katie and Carl had already sparked reconciliation rumours when he was pictured picking her up in his swanky Porsche car last week.

While Katie had been spotted without her £50,000 engagement ring and Carl had opted to delete all photographs of her from his socials,a source told OK! "Katie and Carl are still speaking" and "they love each other still".

"But friends are worried she will just go back to Carl," the source continued. "If they get back together, they will soon break up again as they weren’t in a good place when they broke up."

For all the latest on Katie Price, sign up to our daily newsletter here .