She spent the day before taking her Cavapoo puppy Teddy to a dog cafe.

And Kelly Brook was back to the day job on Thursday when she was pictured heading to work at Heart FM radio studios in London.

The 40-year-old presenter and model had a big smile on her face as she headed through Leicester Square wearing a cable knit cropped cardigan. 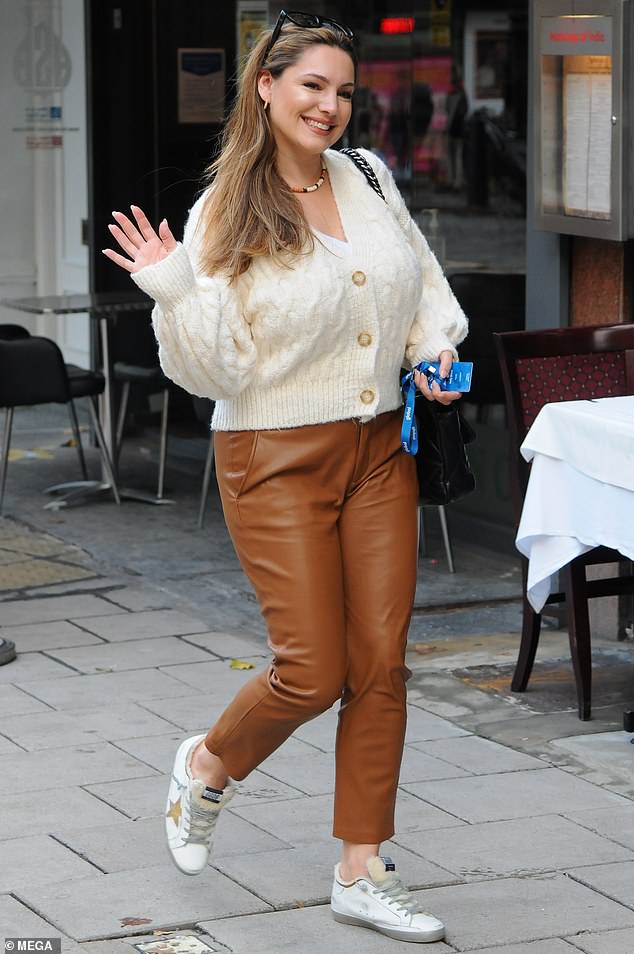 Quick wave: Kelly Brook teamed a cable knit cardigan with brown leather trousers as she headed to work at Heart radio in London on Thursday

Looking good: The 40-year-old presenter and model had a big smile on her face as she headed through Leicester Square in her cosy knitwear

She teamed the number with a pair of slim-fit brown leather trousers which showed off her elongated pins.

And she added a casual flourish to her ensemble with a pair of Golden Goose trainers.

She carried a Chanel quilted bag on her shoulder as she made her way out of a white minibus and headed out down the street. 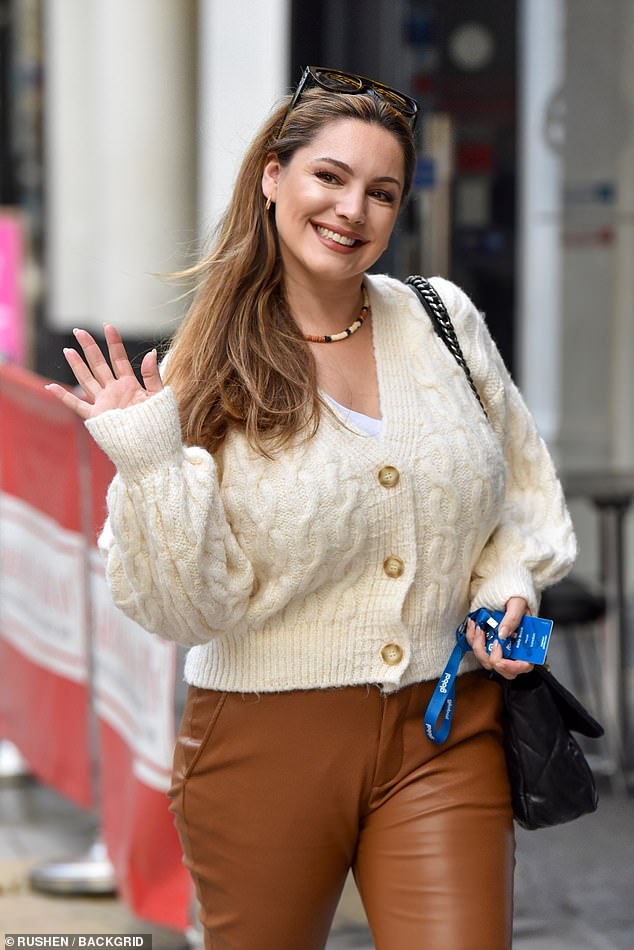 Back to business: She carried her pass in her hand and a Chanel bag 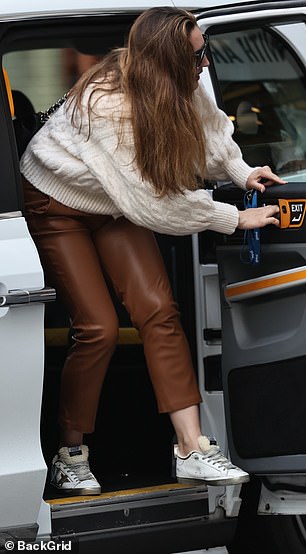 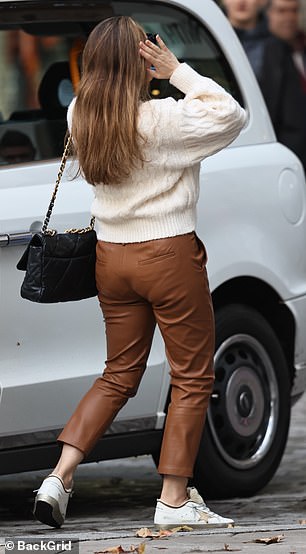 Putting her best foot forward: She added a casual flourish to her ensemble with a pair of Golden Goose trainers.

Kelly had spent the day with her longterm love Jeremy Parisi and their dog at the Dandie Dog Cafe in Hampstead the day before.

The new venue opened on September 22 and according to the website, provides spa facilities, dogsitting and yoga for both dogs and humans.

Kelly had shared a snap of Jeremy in deep shock at how well the dogs were being treated, with one even tucking into a fancy cupcake. 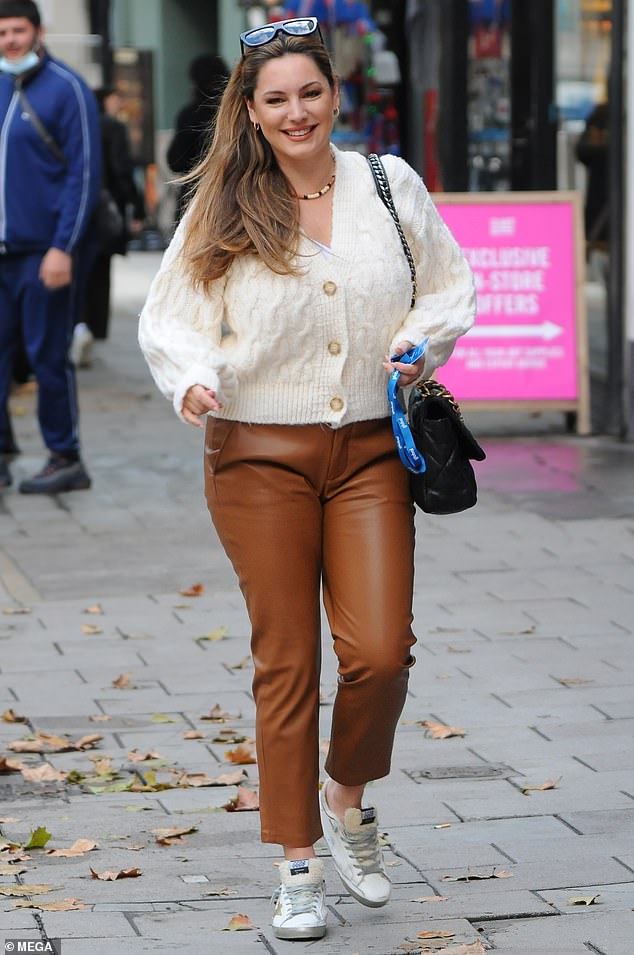 Shady: Kelly balanced her designer sunglasses on her head as she made her way inside

In July, Kelly claimed that sex gets better with age and said her long-term love, Jeremy Parisi is a big fan of her curves.

Speaking on Vicky Pattison’s The Secret To… podcast, she said: ‘My boyfriend is 35 and he is Italian, so, you know, he likes a nice large curvy woman so that’s always a good thing!

‘I think your sex life gets better as you get older!

‘When you’re young you don’t tell them. They are like ‘is that nice?’ or whatever and you’re like ‘yeah!’ When you’re older you are gonna make sure you get what you want!’

The pair have been dating for nearly five years, having started dating in 2015. 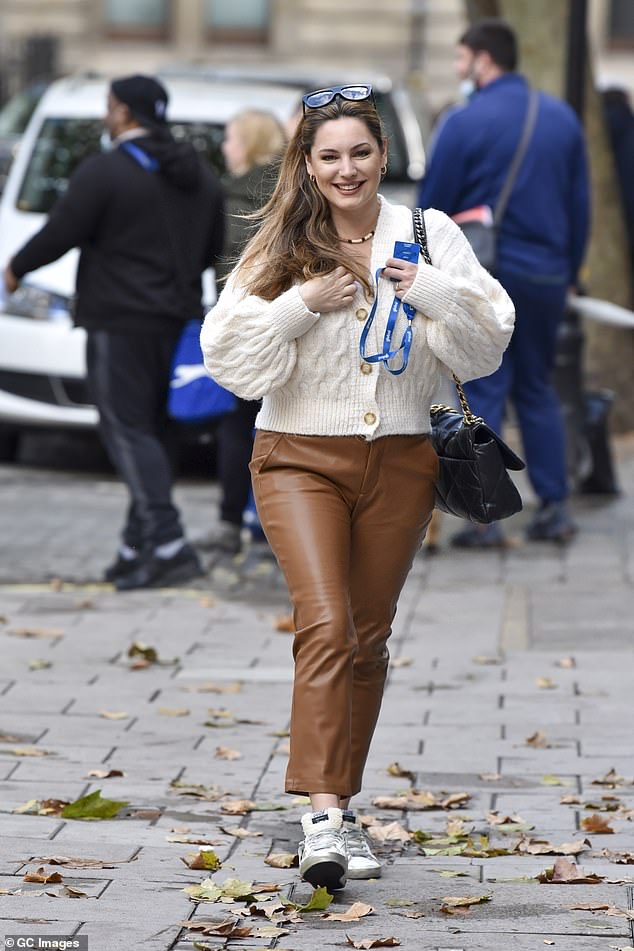 Her man: Kelly and Jeremy Parisi been dating for nearly five years, having started dating in 2015