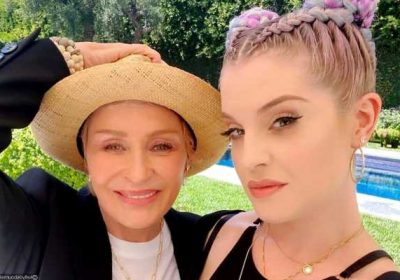 When addressing her mother’s departure from CBS’ daytime talk show, the ‘Fashion Police’ star stresses that she doesn’t ‘give a f**k about cancel culture.’

AceShowbiz –Kelly Osbourne has once again addressed Sharon Osbourne‘s exit from “The Talk“. Upon learning that she and her mother were dubbed “racist” following the latter’s fallout from the CBS daytime talk show, the “Fashion Police” star stressed that she was unbothered with the label.

For Kelly, what matters for her are the opinions of her loved ones. “I care what [my podcast co-host Jeff Beacher] thinks of me. I care what my family thinks of me. I don’t care what somebody hiding behind a computer and a fake Instagram page who puts up stuff where they don’t practice what they preach [thinks],” she explained.

Kelly has previously made it clear that she’s against cancel culture. “I didn’t know what was really going on in this country because I just thought that simply being not racist was enough,” she told Extra in April. “It’s not, it’s actually not, you have to be actively not racist and educate yourself and learn, and don’t be afraid to make a mistake, everybody’s so afraid of cancel culture I say f**k cancel culture, it’s all about counsel culture.”

Sharon left “The Talk” after she and co-host Sheryl Underwood were engaged in a heated on-air debate in its March 10 episode. At that time, the British-American TV personality defended Piers Morgan in the wake of his controversial comments about Meghan Markle‘s explosive interview with Oprah Winfrey.