Home » Celebrities » Kendall Jenner & Scott Disick Got Into An Explosive Fight On The Kardashians! Damn!

Kendall Jenner & Scott Disick Got Into An Explosive Fight On The Kardashians! Damn! 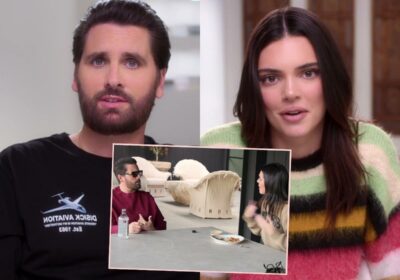 Tensions between Scott Disick and the Kardashian-Jenner family took an explosive turn during the latest episode of The Kardashians — with an unexpected sister leading the charge!

Over the past couple of weeks, fans have watched things get more and more awkward between Scott and the famous fam due to baby momma Kourtney Kardashian’s relationship with Travis Barker. Although Lord Disick has been close with the group for decades now, he is starting to feel a little left out of the family events and even confronted a couple of them about it in the new episode. And let’s just say it did NOT go well — especially with Kendall Jenner!

After throwing some not-so-subtle shade at Kris Jenner about whether or not he would be invited to Thanksgiving dinner, he decided to interrogate the 26-year-old model for not asking him to attend her birthday celebration. She deflected at first, telling Scott in the moment:

“I didn’t really invite anyone to my birthday. It was empty.”

But Scott wasn’t buying it, arguing back that “everybody came.” While Kendall noted that neither Kris nor Kourtney attended the party, the Talentless founder clarified that he was talking about her intimate birthday dinner, not her bash at a club. Realizing her mistake, she commented:

“Literally, only Kourtney and Travis came. That wasn’t a party.”

Ah, did you catch the magic word there? Yeah, she mentioned Travis.

It’s pretty obvious why Scott thought he was being brushed off. He wouldn’t let it go, telling the camera in a confessional:

“Never in a million years would Kendall not invite me to a birthday dinner.”

Even though Kris stepped in to insist that it wasn’t “a birthday dinner,” Kendall soon admitted that the get-together was meant to celebrate her birthday. That is when things started to get really heated. Scott then directly asked:

As Kendall explained, the dinner party had just been with her friends — plus Kris, Kourt, and Travis. However, that explanation still was not good enough for Scott:

“You invited everybody but me?”

It was exactly everyone! Kendall replied:

“Just ’cause Kourt was going to be there. It was very intimate.”

When Scott continued to press about being left out, the reality star went off! She fired back:

“That is not my business at the end of the day. Making Kourtney uncomfortable, like, that’s not part of my business. I’m so sorry that that makes you sad and I’m not ever trying to leave you out. Kourtney at the end of the day is my sister. Of course I want her there. This dinner was literally 15 people. If it’s an intimate dinner and I’m not willing to have an uncomfortable situation happen –”

Yeah! Good for Kendall! Like, seriously, when will Scott realize Kourtney is and SHOULD always be their priority?? Demanding equal treatment is not only ridiculous, it’s offensive!

“I don’t know what you’re getting mad about.”

To which Kendall stated:

When Scott said he had “not heard you say sorry” to Kendall, she became completely fed up with the conversation:

“This is so f**king ridiculous. You won’t let me speak, Scott. ”

And she stormed away! Damn! So it’s safe to say things did not end on a good note, and it looks like we’ll have to wait and see if the two make up when the new episode releases next week!

It’ll certainly be inneresting to see how this dynamic continues to play out throughout the season! While we understand how difficult this situation must be for Scott, it was really unnecessary and cringeworthy to get into such a heated argument with Kendall over a birthday party — especially after she has come to his defense on the show.

But what do YOU think, Perezcious readers? Was Scott right to feel angry over not being invited to the party? Or should he be an adult and realize if he’s going to cause awkwardness with his ex, he should step aside? Let us know in the comments (below)!