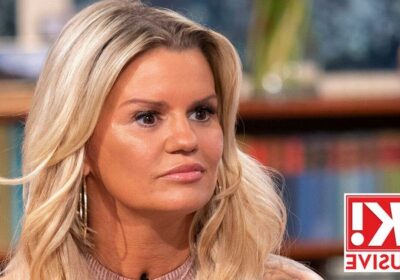 A petition to remove Holly Willoughby and Phillip Schofield from This Morning has received more than 66,000 signatures after the pair were accused of "jumping the queue" – while many patiently stood in line for hours to see the Queen's coffin.

And Kerry Katona has said she is "feeling" for the presenting duo in her exclusive column – only available for OK! VIPs. While she gets why the public may be "angry" after the likes of David Beckham queued, the star, 42, shared: "I think the backlash is a step too far, especially when people have said they should lose their jobs."

Here, read Kerry's thoughts on the row, how she's still getting used to saying "King Charles", and why we all need to come together to support Cara Delevingne.

Are you an OK! VIP? If not, why not? It’s free and gives you backstage access to stories like this, exclusive home tours, special discounts and so much more! All you need to do is pop your email address below! P.s. if you’re already seeing this article in full, congrats – you’re already on our guest list! THE END OF AN ERA

It was a busy week for me. I’m currently away from the kids and Ryan as I have been filming something exciting, but I can’t say anything about it yet. All will be revealed very soon. I watched the Queen’s funeral and found it really moving. It’s an end or an era, isn’t it? The fact we won’t see a queen again in my lifetime makes me really sad. It’s so strange saying 'God save the King' and 'King Charles' too. I can’t get my head around it – I feel like we’ve gone back in time.

GUTTED I MISSED OUT ON THE QUEUE

I'm gutted I didn't get to join the queue to see the Queen's coffin at Westminster Hall because I've been away working. I would have queued for a week if I'd had the chance. It's a part of history and shows such an inspiration to everyone.

She was calm and collected and, ultimately, she was the nation's granny. I'm not sure if the kids would have wanted to join me in the queue – I don't think they even watched the funeral! But it was important for me to watch it.

I SUPPORT HOLLY AND PHIL

Holly Willoughby and Phillip Schofield have faced a lot of backlash after being accused of skipping the queue for the Queen’s lying-in-state while others waited in line for hours.

There’s even been a petition to sack them from This Morning. I can see why people may be angry as everyone else had to queue for hours, even David Beckham did.

But I do think the backlash is a step too far, especially when people have said they should lose their jobs. It seems like a big overreaction with everyone kicking off on social media. I really feel for Holly and Phil. They were there doing their job.

ONCE THE TRUST IS GONE, IT'S GONE

Adam Levine has been accused of having an affair with a model named Sumner Stroh. After denying the claims, he said he used “poor judgement” by speaking to her in a flirtatious manner and concluded he and his wife Behati Prinsloo “will get through it together”.

I have been cheated on in the past and, even now, I’m still impacted by it. I did try to make it work with some of my exes who cheated, but it didn’t work out. I have no regrets. That’s how it goes sometimes.

Cara Delevingne has sparked fears over her health after not showing up for fashion shows and she is reportedly struggling with issues that go beyond substance abuse.

It’s heartbreaking to see this happen to her. I really hope she’s getting the help that she needs and people are doing what they can to support her.

You can see she’s not herself and she’s struggling. I’ve been there and it’s a horrible feeling when you’ve lost your way. I know how it feels and it was a low time in my life, but people need to understand that we can all go off track.

We all go through our hard times and we all get lost, but we all have the strength to get through it with help. I really hope Cara gets back on track and gets the support she deserves.