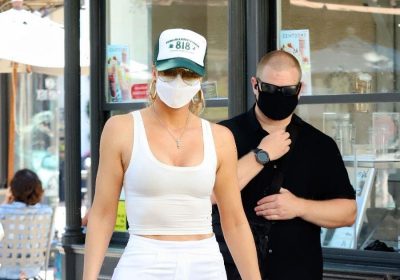 Khloe Kardashian has been spotted with her hands full as she took her daughter True and nieces Chicago, Stormi and Dream to The Grove shopping centre in Los Angeles for ice cream.

The 37 year old, whose ex Tristan Thompson recently confused fans by gushing over her in a birthday tribute, was photographed dressed in an all white ensemble for the outing with the children.

The Keeping Up With The Kardashians star donned a tight white cropped vest top with high-waisted loose fitting trousers alongside a pair of matching white heels.

TV personality Khloe also wore a white face mask with a white and green baseball cap. Accessorising with a large pair of gold hoop earrings and some shades, the blonde beauty kept an eye on her three year old daughter and nieces.

Kris dressed in a white linen shirt dress that reached her ankles with a pair of trousers underneath. She also wore a white face mask, matching her daughter Khloe.

While Khloe definitely had her hands full with the crew of children, she appeared to have no problem taking the lead and pointing them in the right direction with a little help from her mum.

It comes after the reality star recently found herself at the centre of a fresh Photoshop fail after her fans noticed she had six toes in an Instagram snap.

Showing off her bronzed glow, Khloe looked sensational in a neon pink bikini for the picture, which she cryptically captioned: "Teasing you until Thursday."

While she was inundated with comments over her incredible look, the Good American founder also raised eyebrows over what appeared to be an extra toe on her foot.

"Those feet don't look right," one person commented while another said: "Nobody gonna talk about the extra toe oooor…?"

The comments about her photoshop blunder on her feet continued to pour in, with another person added: "Is there an extra pinky toe?"

Someone else also noted: "Omg you have the toe thing Kim does too?"

For all your updates on Khloe Kardashian, sign up to our daily OK! newsletter.