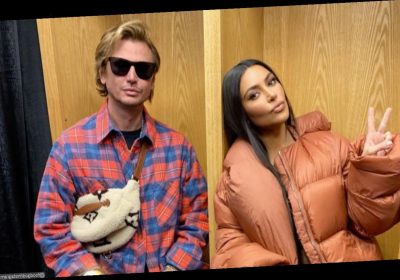 Recalling the robbery to the TV star, Foodgod a.k.a. Jonathan Cheban sounds distressed during a phone call which is featured in a clip from Thursday, April 8 episode of ‘Keeping Up with the Kardashians’.

AceShowbiz –Kim Kardashian is such a supportive friend. The TV star is seen calming her friend Foodgod a.k.a. Jonathan Cheban who sounds distressed during a phone call which is featured in a clip from Thursday, April 8 episode of “Keeping Up with the Kardashians“.

Jonathan tells the SKIMS founder that he’s “freaking out” after being robbed. “Wait, wait, take a deep breath,” concerned Kim says. “Hold on, hold on. What is wrong?”

He then recounts the scary experience, telling the mom of four that some criminals with guns robbed his watch when he was in New Jersey. “There was like two of them,” he explains. “I’m freaking out right now.”

In response to that, Kim tries to calm overwhelmed Jonathan through phone. “Wait, just take a deep breath. Did you call the cops?” Kim asks, to which Jonathan replies, “Yeah, of course I called the cops! They’re looking for them now. Like f***ing freaking out, they put a gun to my mom’s head.”

Kim may know the feeling of being robbed way too well as she experienced being robbed at gunpoint in Paris back in 2016 while she was attending Paris Fashion Week. “I am definitely shocked over what Jonathan’s saying. I’ve never heard him over the phone like, crying. And it’s really scary because this kind of thing can really traumatize someone,” Kim says in a confessional.

Foodgod then tells Kim that 20 cops have arrived at his house. “You’re safe. I love you. That’s all that matters,” Kim assures her friend.

Of her own traumatizing experience, Kim previously said, “I was looking at the gun, looking down back at the stairs. I have a split second in my mind to make this quick decision. Am I going to run down the stairs and either be shot in the back–it makes me so upset to think about it–but either they’re going to shoot me in the back or if I make it and they don’t, if the elevator doesn’t open in time or the stairs are locked, then I’m f***ed! There’s no way out.”