Home » Kim Kardashian Konfesses: I Had COVID. And So Did All My Kids. And It Sucked!

Kim Kardashian Konfesses: I Had COVID. And So Did All My Kids. And It Sucked! 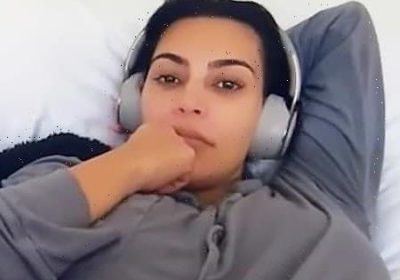 On Thursday’s brand new episode of Keeping Up with the Kardashians, the show’s main star came out and admitted that the coronavirus outbreak hit home for her in the fall of 2020.

And we mean this literally.

As you may have previously heard, son Saint tested positive for COVID-19 several months ago.

But we’ve now learned that Saint wasn’t alone among his immediate family members — his mother and all three of his siblings also came down with this potentially deadly virus.

While setting up a lavish and unexpected birthday present for mom Kris Jenner, Kim admitted to the E! cameras on hand:

“I’m just like, stressing a little bit because my kids woke up and one of them had a runny nose, and no other symptoms. So, not a big deal.”

Kim said she took as many health precautions as possible as a result, but…

“My little Sainty just tested positive for COVID,” she later informed her doctor over the phone. “He’s doing OK, he doesn’t really have major symptoms. He just had a bit of a fever.”

In a confessional, the Keeping Up with the Kardashians lead explained that she had been testing her children weekly because they had been attending a “pod” school.

“So, someone at school tested positive and my son was around them,” Kim noted.

“So, Saint has COVID, and I’m just really worried about him.

“He was crying and coughing on me.”

The soon-to-be-ex-wife of Kanye West then confessed that her seven-year old was also ill.

“North is saying she’s feeling sick and I slept in bed with her last night,” Kim told her physician. “She tested negative, but I’m gonna test her again with me on Saturday.”

This troubling health situation came just as Kim was preparing for 12-hour study sessions with a tutor for her second attempt at the law exam, having failed the first time.

“Taking care of my kids, obviously, comes first,” she assured viewers, though.

Later on, a title card revealed on the episode revealed the following:

“Kim and the family tested positive for COVID. Production shut down for 14 days while the family and crew quarantined. Kim continued to film, self-shot.”

As Kim struggled with COVID-19, Kim said in this unique footage that she suffered from headaches, chest pains, fevers, upset children and intense studying.

Regardless, Kim decided to move forward with the exam since there were no COVID extensions in place.

“I can’t believe I just finished the baby bar,” an exhausted Kim on air.

She added that taking the exam with COVID was “the hardest thing” she’s ever done and added:

“If I don’t pass, I don’t care because I had COVID. And if I pass, then it’s a f–king miracle and I don’t know how I did that.”

After the episode aired, Kardashian was forced to defend herself.

Remember herr scandal-filled 40th birthday party? When she rented out a private island amid the ongoing coronavirus pandemic?

The official Twitter account for Buzzfeed News took note of this event last night and suggested the SKIMS founder got the illness while celebrating with family and friends in October.

“False. Nobody caught Covid from the trip,” Kim replied on Twitter, expounding as follows:

“Saint was the first to have it in our family and he caught it from school from another student who tested positive first.

“I then developed symptoms and got it a few days after he coughed on me while caring for him.”