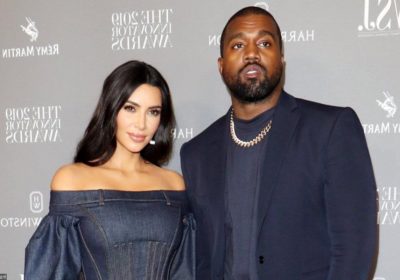 The ‘Keeping Up with the Kardashians’ star signs a stunning promotional portrait of herself for a fan with her estranged husband’s last name on it on her way out of Craig’s in West Hollywood.

AceShowbiz –Kim Kardashian is apparently still keeping her full married name amid her ongoing divorce from her third husband Kanye West. When a fan asked her to sign a stunning photo of herself on her way out of a restaurant with her family, the “Keeping Up with the Kardashians” star wrote her moniker which was followed by the rapper’s last name.

When leaving after a dinner with mom Kris Jenner and sisters Kendall Jenner and Kylie Jenner at Craig’s in West Hollywood on Friday, June 4, the SKIMS founder kindly gave a fan her signature. Over a glamorous promotional portrait of herself from her KKW Beauty brand, she wrote, “Kim Kardashian West.”

For the outing, Kim was seen rocking a black zippered jumpsuit with silver detailing, adding a pink and brown snakeskin handbag. The 40-year-old reality star also accessorized with a silver chain choker with a second necklace while sporting white polished nails to complete her look. The mother of four styled her long raven hair in waves and opted to wear smokey eye makeup.

A day prior, Kim broke her silence on her divorce from her 43-year-old estranged husband in a tearful episode of “Keeping Up with the Kardashians”. The TV personality, who was previously married to Damon Thomas and Kris Humphries, confessed emotionally that she felt like “a failure” over the dissolution of her seven-year marriage with the “Flashing Lights” rapper.

Elsewhere in the episode, her older sister Khloe Kardashian said in a confessional, “Kim has been struggling privately behind the camera about her relationship. It’s tough because Kim is clearly redirecting so much of her frustration and sadness and anger. Sometimes you take things out on something that has nothing to do with what you’re going through.” She added, “Kim is dealing with so much right now and it’s tough because, before we left, her and Kanye had this big fight.”

“I just, like, honestly can’t do this anymore,” Kim admitted. She continued, “Why am I still in this place where I’m stuck for years? [Kanye] goes and moves to a different state every year. I have to be, like, together so I can raise the kids.”