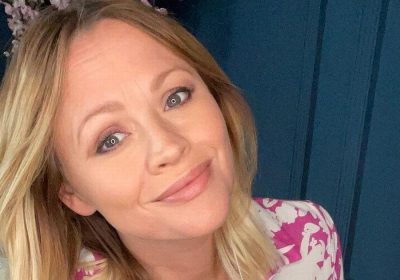 Kimberley Walsh has opened up on her pregnancy journey, confessing her unborn baby has been kicking her non-stop.

The 39 year old, who recently showed off her bare bump as she prepares to welcome her "melon sized baby", explained that her little boy is rather strong.

"He’s a very strong little thing, I feel like I get kind of beaten up all day with all his kicking, but I love it because it’s comforting to know he’s wriggling around. It feels ready to pop," she shared.

The Girls Aloud star said neither of her two other children Bobby, four, and Cole, two, were delivered on their due dates and she's hoping this time will be different.

Kimberley continued to the Mirror: “Neither of my other two were on time, which is very much unlike me, so hopefully this one might be a bit more like me and not be later.

"I’ve had the easiest time, but these last few weeks you start to feel, ‘OK, I’m done now’. I think a couple more weeks. I can’t wait for him to come and get to know him and his personality.”

Kimberley and her husband Justin Scott's kids are equally excited to meet their sibling as she explained it's "a long time to wait" in their eyes.

She said: “Initially they were like, ‘when’s the baby coming?’ All the time, now they’re like, ‘I don’t think he’s ever coming’.

"We’ve told them it’s only going to be a few more weekends, so they’re getting excited again.

“They can see the size of him, and their faces when they put their hands on my tummy and he punches them away!”

The singer, who recently put on a casual display in a baggy black tracksuit, went on to speak about how exciting it was to be pregnant alongside her two sisters as Sally, 43, found out she was pregnant just one month after Kimberley.

While her older sibling Sally is actually pregnant, her younger sister Amy found out her on-screen Emmerdale character Tracy Metcalfe was expecting.

Amy's character gave birth in scenes aired in February and she was given all the direction and help she needed by Kimberley and Sally in order to act it out right.

“We’ve all been ­pregnant, me and my older sister for real and my younger sister on the screen. She was constantly sending us pictures of her fake bump, it was a bit bizarre really," Kimberley said.

The star added: “Sally and I have had enough babies between us to help her with the birth scenes, which she did ­amazingly.

"We did a good job of explaining the pain and terror of it all.”