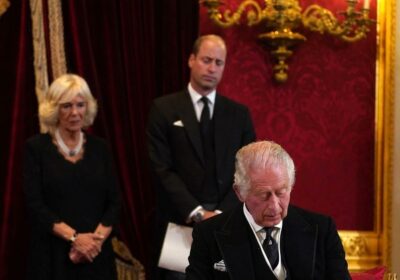 The King, 73, was at the royal residence of Hillsborough Castle in Co Down in Northern Ireland, where he sat down to sign a visitor’s book when the incident occurred.

His Majesty was heard telling royal aides "I can't bear this bloody thing" after a pen he was using inconveniently left ink all over his hands.The Queen Consort, who was given the pen, said “It [the ink is] going everywhere," before the pair wiped their hands.

The King may have thought the mishap was behind him, as he visited Wales for the first time since becoming monarch, but royal fans had other ideas with a cheeky joke.

For all of the latest updates, sign up for OK!'s Royal newsletter

Charles was captured on camera as he greeted the well-wishing crowds in Cardiff, while one person humorously handed him a black biro pen.

In the footage, the King can be seen accepting the writing utensil but looks at it puzzled – though it didn't take much explanation.

In very few words, a woman can be heard saying "just in case", which thankfully made Charles burst out with laughter.

The amused King found it just as funny and the comical moment was shared with fans before he moved on to greet other mourners.

At the time of the initial incident, royal fans leapt to the King’s defence when he seemed to get irritated with the pen and forget the date.

"He’s 73, hasn’t had a full day of rest, days and days of public engagements, and probably hasn’t had a moment for himself to grieve. Give him a break," said a second.

Another tweeted: "Charles has lost his mother and has had to become king and mourn in full public view. Who cares if he got upset over a pen. He’s done incredible."

This 100 page tribute looks back at the life of our most beloved monarch, Queen Elizabeth II, marking key events during her remarkable 70-year reign, as well as her childhood as a young princess, her enduring love for Prince Philip and her family, and the lasting legacy she leaves our nation.

This edition is available to buy in stores now or it can be purchased online here.

A third added: "King Charles must be wracked by grief & exhausted from non stop travelling – I’d have snapped over a pen by now."

The footage came to light after another pen-related incident last Saturday, when the new monarch was seen gesturing through gritted teeth for a desk item to be taken away by an aide while signing a document during his first Privy Council.

His Majesty sat down to sign the official documents but found that the tray of pens that had been left on the table was in his way, and he appeared to grimace and push the tray before somebody removed it from the table.