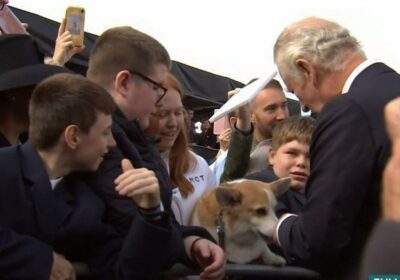 King Charles, 73, and Camilla, 75, touched down at Belfast City Airport at Tuesday lunchtime, continuing the new monarch's tour of the UK since he ascended the throne following the death of Queen Elizabeth ll on Thursday, 8 September.

After travelling to Hillsborough Castle, the King and Queen Consort thrilled the waiting crowds – including scores of children – that had been waiting for hours outside of the castle as they stepped out of the car for a walkabout.

The royal couple greeted the crowds warmly, as the new King even used both hands to shake as many of the hands outstretched towards him as possible.

The new King was quick to pet a corgi that he spotted in the sea of people, in a touching moment that was surely a nod to his late mother, the Queen, who famously owned corgis all of her life.

After touching down at Belfast Airport, the King and Queen consort were greeted by Northern Ireland Secretary Chris Heaton-Harris, the chief executive of the airport, and the lord lieutenant of Belfast Fionnuala Jay-O’Boyle, who is one of Charles' close friends and they could be seen greeting each other warmly.

Some school children also greeted the King and Queen Consort, before the royal couple set off on their journey to Hillsborough Castle, where crowds had been gathering since before dawn to get a glimpse of the new King.

King Charles has a day full of engagements ahead of him in Northern Ireland, which includes meeting Stormont's party leaders and receiving a message of condolence from the speaker of the assembly.

The King, accompanied by the Queen Consort and PM Liz Truss, will attend a church service in Belfast later on this afternoon.

His appearance in Northern Ireland comes after a string of engagements the new King has undertaken since the death of his mother, the Queen, who reigned for an incredible 70 years.

Charles flew to Northern Ireland from Edinburgh where he guided the royal family in a poignant procession behind the coffin of his mother as it travelled from the Palace of Holyroodhouse to St Giles' Cathedral in the capital, where members of the public could pay their respects.

The King was leading some of the royals on foot, alongside the his siblings Duke of York, Earl of Wessex, Princess Royal and her husband Vice Admiral Sir Tim Laurence – while the Queen Consort and other members of the monarchy follow in cars.

He, along with his siblings, then stood guard around their mother's coffin as it laid-in-state at St Giles' Cathedral.

During a historic meeting with members of parliament in London on Monday morning, King Charles admitted to feeling "the weight of history" in the days that have followed the Queen's death.

He began: "As I stand before you today, I cannot help but feel the weight of history which surrounds us and which reminds us of the vital parliamentary traditions to which members of both Houses dedicate yourselves with such personal commitment, for the betterment of us all.”

The King went on to thank MPs and peers for their messages, saying: “I am deeply grateful for the addresses of condolence.”

Meanwhile, the Queen's coffin will be flown back to London today, accompanied by The Princess Royal, 72, and her husband Vice Admiral Sir Tim Laurence.

Once it arrives in London, it will rest overnight in the Bow Room at Buckingham Palace before being transferred to Westminster Hall where the Queen will lie-in-state from Wednesday 13 September to Monday 19 September, before her funeral takes place at 11.30am at Westminster Abbey on Monday.

This week, OK! celebrates the life of Her Majesty the Queen with a commemorative special in honour of Britain’s longest reigning monarch. Be sure to pick up your copy.