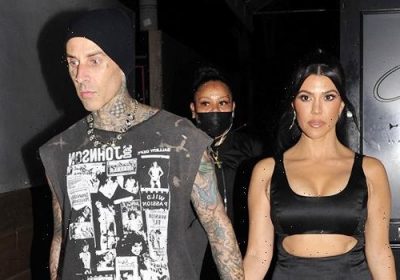 Getaway! Kourtney Kardashian appeared to be enjoying an oceanside vacation with Travis Barker’s daughter and stepdaughter, along with her BFF Sarah Howard!

Kourtney Kardashian, 42, has truly bonded with boyfriend Travis Barker‘s kids. The Poosh founder and Blink-182 drummer, 45, have been romantically linked since the spring following a years long friendship. Kourtney shared a low key photo of herself hanging with Travis’ daughter Alabama, 15, whom he shares with ex Shanna Moakler, 46. Also present was Shanna’s daughter from her previous relationship, Atiana De La Hoya, 22, and Kourt’s BFF and Poosh right hand Sarah Howard.

The Keeping Up With The Kardashians star posted a selfie of the four ladies in front of a glass door, captioning their reflections. Atiana sizzled in a push-up black bikini top and a wide legged white pant, while Kourt rocked her go-to straight leg, distressed jean and an orange bucket hat. Alabama could be seen in a white swimsuit, as Sarah rounded out the looks with a black ensemble and big straw hat to stay protected from the sun. While she didn’t tag a location, the blue ocean could be seen behind them.

Kourtney appears to have developed a close relationship with Alabama after a recent ski trip to Park City, Utah. The reality star hilariously skied right under the the nervous 15-year-old for an epic Instagram video included in the round-up Kourtney posted, embedded below. Atiana — who has always had a close relationship with her step-father — also vacationed with the drummer and Kourt back in April. Travis has previously been open about keeping his connection with Atiana, who is a model and designer, despite his 2008 split from Shanna.

“The kids’ best interest is what we all have in mind – there’s nothing else,” he said in an interview back in 2016. “Our relationship was so long ago. We’re just being friends. Doing the best coparenting is the most important thing,” he explained.

Mom Shanna has thrown some shade in recent weeks towards Kourtney and the Kardashians, but she doesn’t seem bothered by Travis’ ex. “[Travis and Kourtney] both love the family people they are, they both love the career-oriented people they are and they both love each other because everything falls into place because things are so easy,” a source told HollywoodLife EXCLUSIVELY of their relationship back in March. “They both understand what they are getting from each other,” they added.