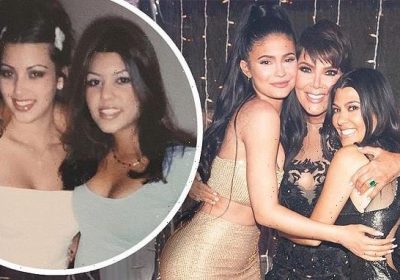 She’s known for her close relationship to her media-savvy family.

And on Sunday, Kourtney Kardashian was showered with love and affection in the form of numerous Instagram posts from her siblings and friends that were meant to commemorate her 42nd birthday.

Leading the tributes to the reality television personality were her younger sister Kim and her mother Kris, who both uploaded several images with her to their respective accounts. 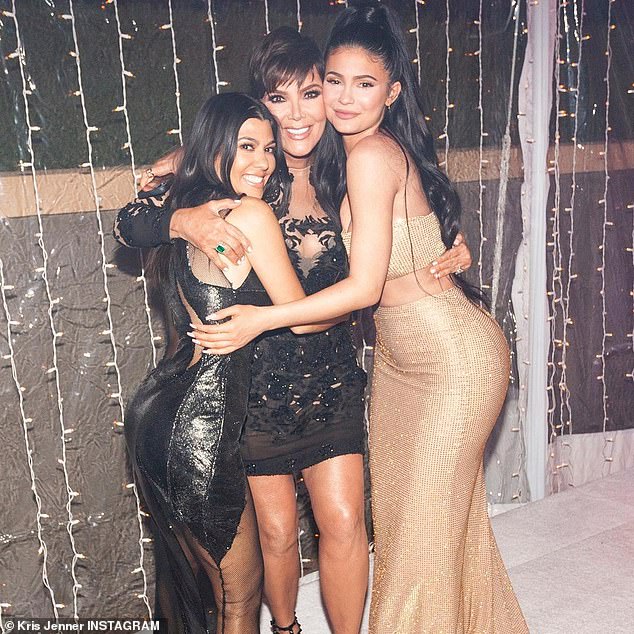 Special occasion: Kourtney Kardashian was showered with affection in the form of Instagram tributes from her friends and family members to commemorate her 42nd birthday on Sunday

The estranged wife of Kanye West began her message to her older sibling by writing: ‘Happy Birthday to my Armenian Queen @kourtneykardash!’

The 40-year-old went on to describe her sister as ‘The person on this planet I’ve known the longest! The person that will try any beauty treatment with me LOL.’

She added: ‘You always know what you want in this life and will never conform to what others ideals are and I admire that so much! You always stick up for what’s right and have become the best therapist a girl could ask for!’

Kim concluded her message by telling her sister: ‘I love you too the end of time and beyond! Have the best birthday, you deserve it all!!!’ 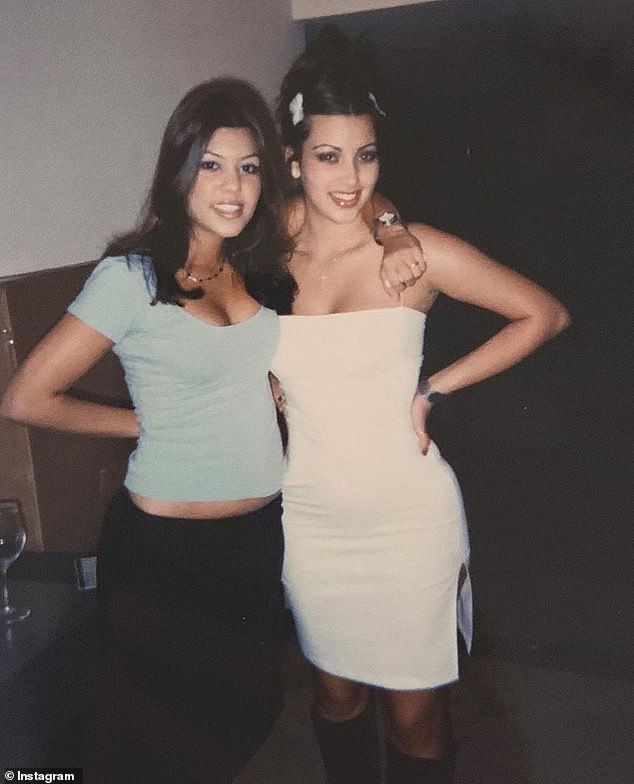 Sensational sibling: The reality television personality’s younger sister Kim led many of the tributes and shared a few throwback images to her Instagram 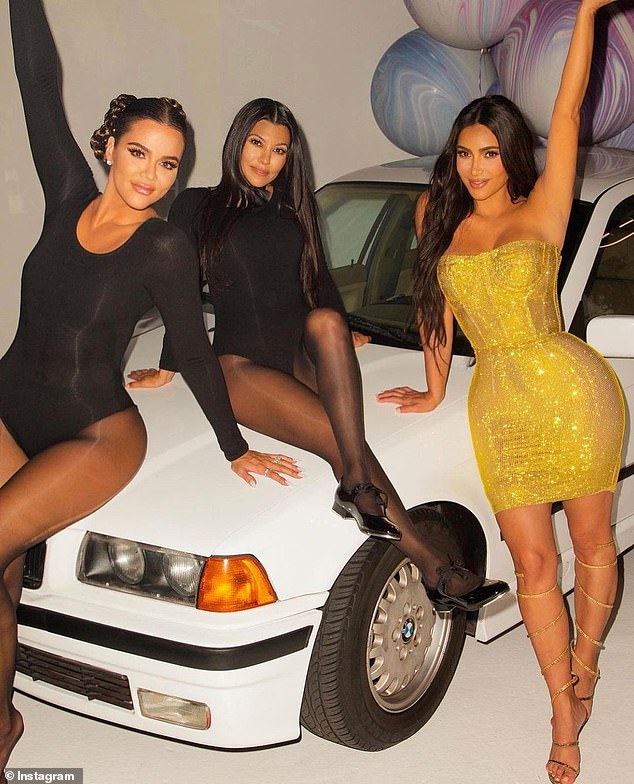 Impressive quality: In her message, the estranged wife of Kanye West commented on her sister’s tendency to ‘stick up for what’s right’ 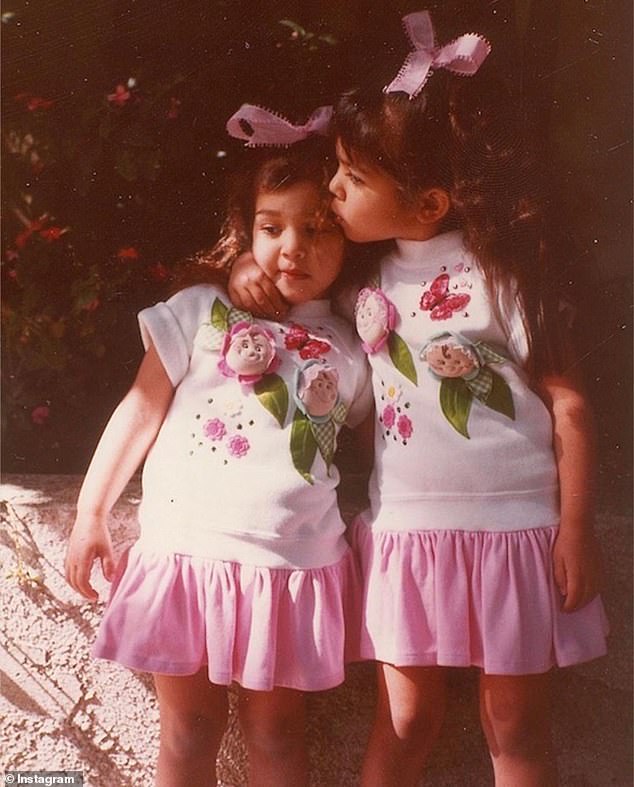 Always and forever: Kim concluded her message by expressing that she loved her sister to ‘the end of time and beyond’

Kris Jenner began her Kourtney-directed message by proclaiming: ‘I am beyond proud of the amazing woman you are.’

The 65-year-old then commented on her daughter’s skills as a parent and as a confidant for the rest of her family.

She wrote, ‘you are the most fabulous mommy, daughter, sister, friend, and auntie and you are an inspiration and such a beautiful source of love and support to all of us!’

The matriarch of the Kardashian-Jenner clan finished her message by writing that she wished nothing but the best for her eldest child. 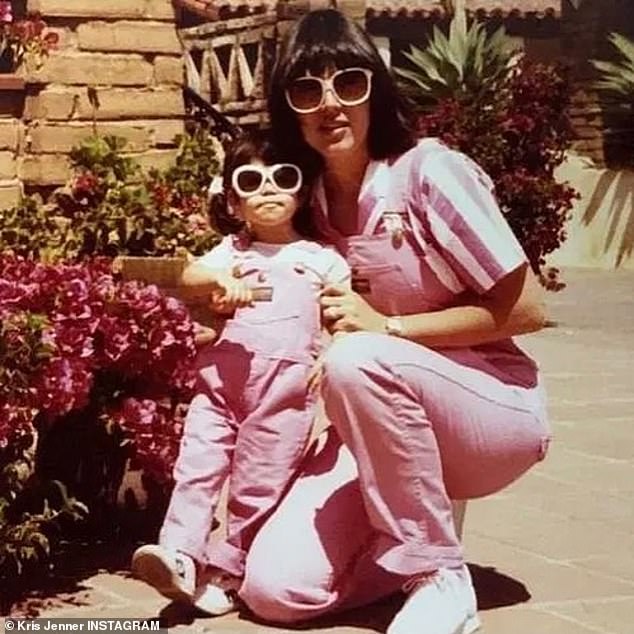 Mom knows best: Kris Jenner also shared a set of images to her account to commemorate her eldest child’s birthday 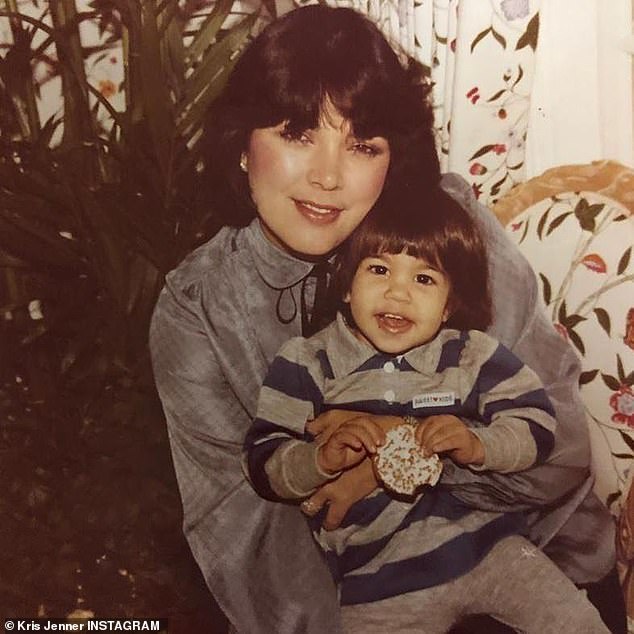 Kind words: In her message, the matriarch of the Kardashian-Jenner clan called her daughter ‘an inspiration and such a beautiful source of love and support’

‘Have the most magical day filled with all of the joy you deserve… I love you beyond measure and I thank God every day for blessing me with you. I love and adore you,’ Jenner noted.

Kourtney also shared an image of a text exchange she had with her mother, who told her that the day her first daughter was born was the ‘best day of my life.’

Khloe Kardashian also wrote a lengthy message for her older sister and told her followers about the close bond that the siblings shared.

‘You are my soulmate!! My partner in every way. In any lifetime I will find you. I can’t imagine my life without you, nor would I ever want to imagine that,’ she expressed. 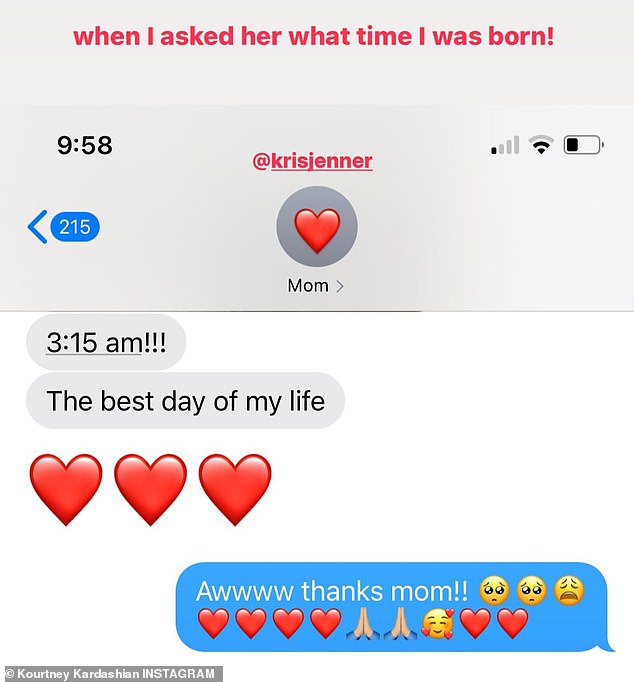 Kind words: Kourtney later shared an image of a text exchange she had with her mother, who noted that the day her eldest daughter was born was ‘the best day of my life’ 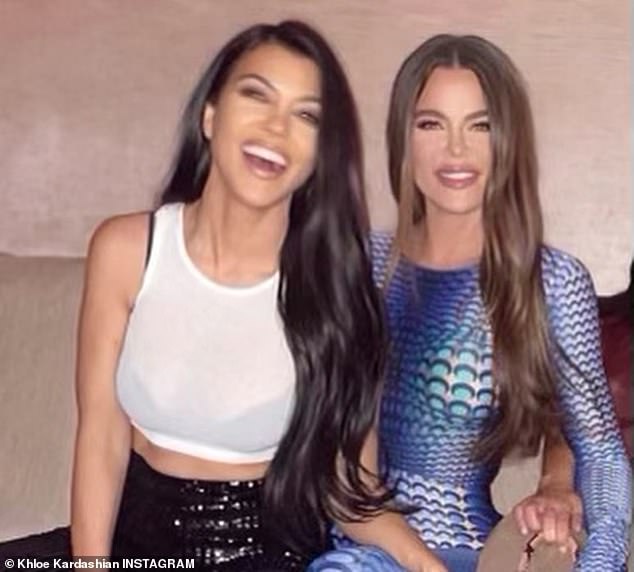 Family affair: Khloe Kardashian also shared several images to her account and wrote a touching tribute to her ‘partner in every way’ 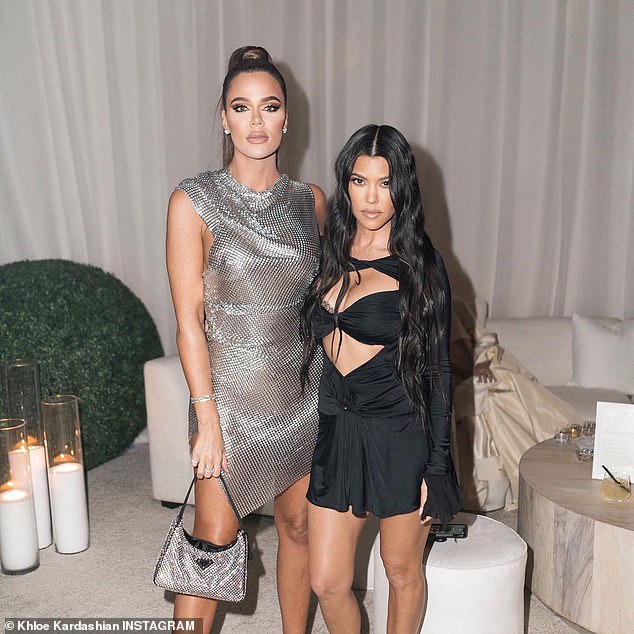 Multiple roles: In her post’s caption, the Good American co-founder noted that Kourtney was ‘my best friend, my wrestling partner…the Danny Devito to my Arnold Schwarzenegger’

The 36-year-old then spoke about how she and Kourtney were inseparable and how they would stick together through both good and bad times.

‘You and I have an incredible rare bond that no matter what, it can never be broken. You are my best friend, my wrestling partner, you are the Danny Devito to my Arnold Schwarzenegger,’ Kardashian wrote.

The Good American cofounder went on to note, ‘Thank God I was blessed with the most incredible siblings I could dream of.’

Khloe finished her message by writing that she hoped that her sister would find nothing but contentment in her future endeavors. 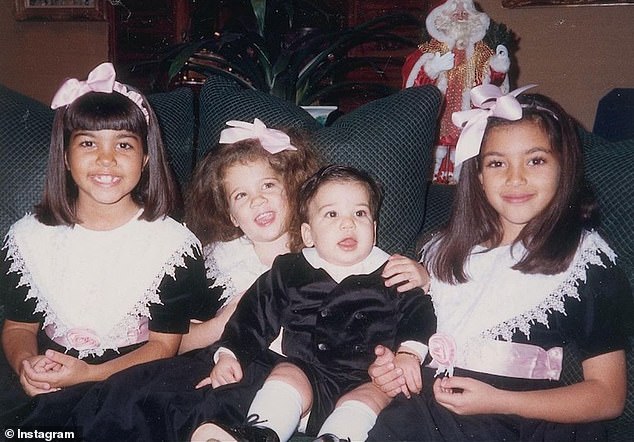 Happy sibling: Khloe also wrote that she was happy to have been ‘blessed with the most incredible siblings I could dream of.’ 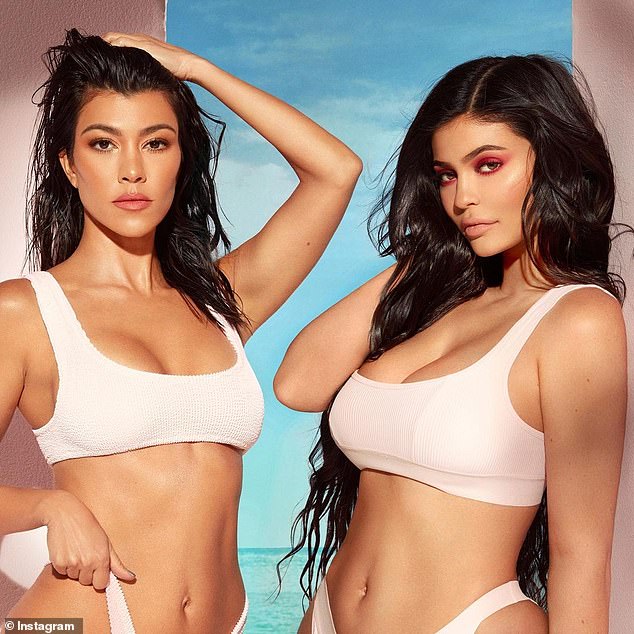 She expressed, ‘Today and every day, I pray that your soul is covered in love and from your core, I pray that you’re happy! For the rest of your life, You deserve only magical things!’

A set of images featuring the reality television personality was also shared to the official Instagram account of Kylie Cosmetics.

Kourtney previously collaborated with the beauty brand on a set of lipstick and eyeshadow palettes, which were released in 2018.

A brief message in the caption for the company’s post read: ‘happy birthday @kourtneykardash.’ 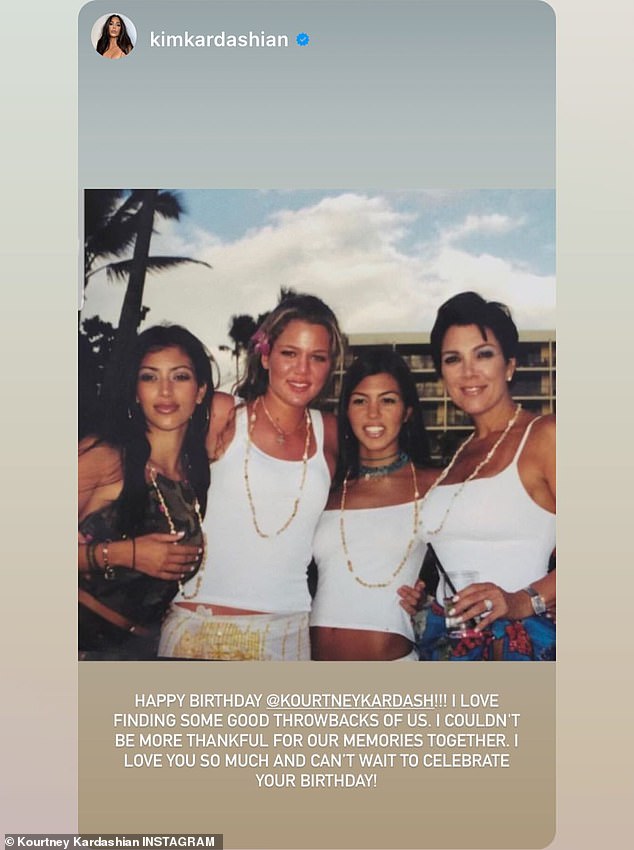 Letting everyone know: Kourtney shared several birthday tributes from her friends’ Instagram Stories to her own on Sunday morning 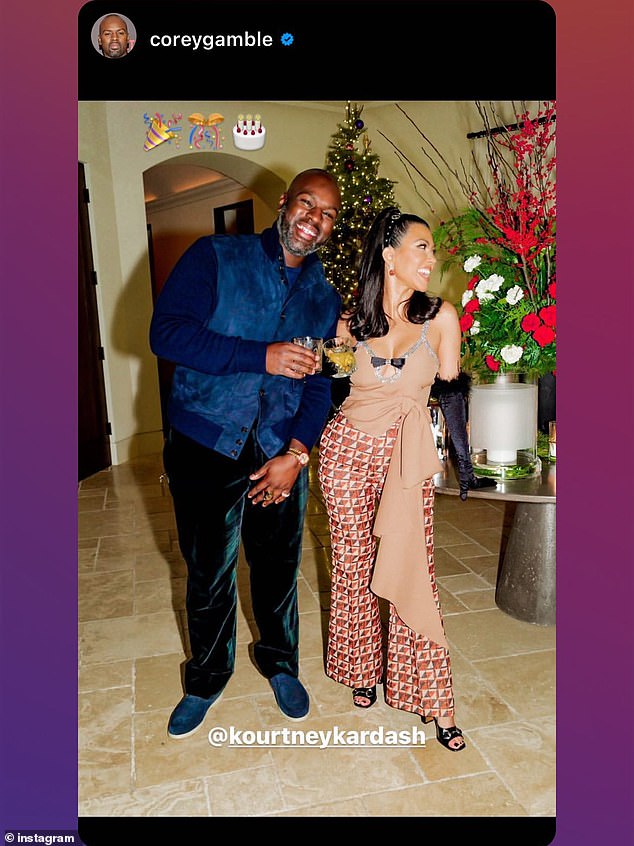 The mother of three went on to share several other congratulatory messages and images from her friends’ Instagram Stories to her own.

Kourtney notably reposted two images that had been posted to Corey Gamble’s account, the first of which showed the two spending time together at a family event.

Another shot that was shared by Kris Jenner’s boyfriend featured him sitting next to the designer while they wore similar American flag-printed shirts.

Kendall Jenner also shared a photo with her older half-sister to her Story, in which the siblings were seen enjoying a bit of pasta together. 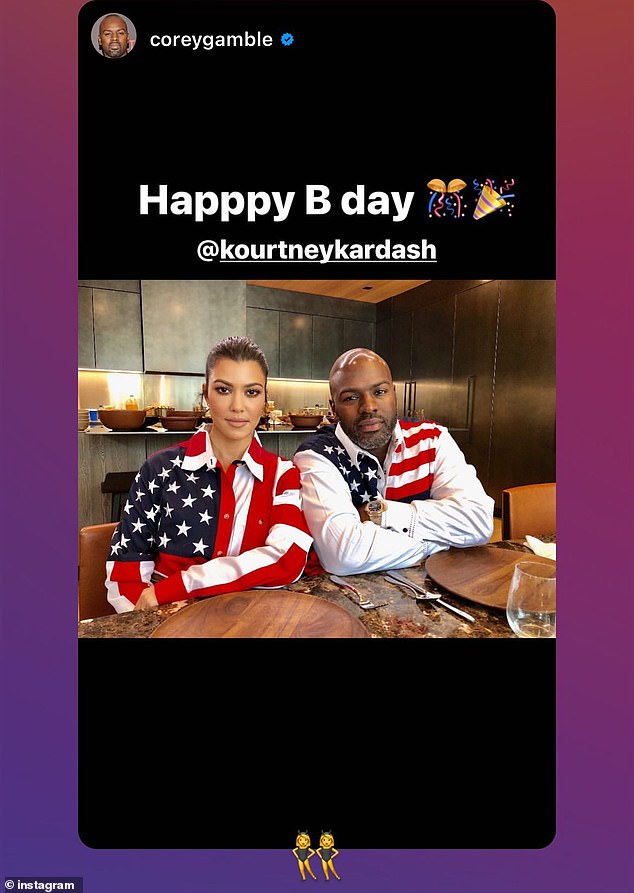 Clothing coordination: One of Gamble’s shots showed him sitting next to the designer as they wore similar button-up shirts 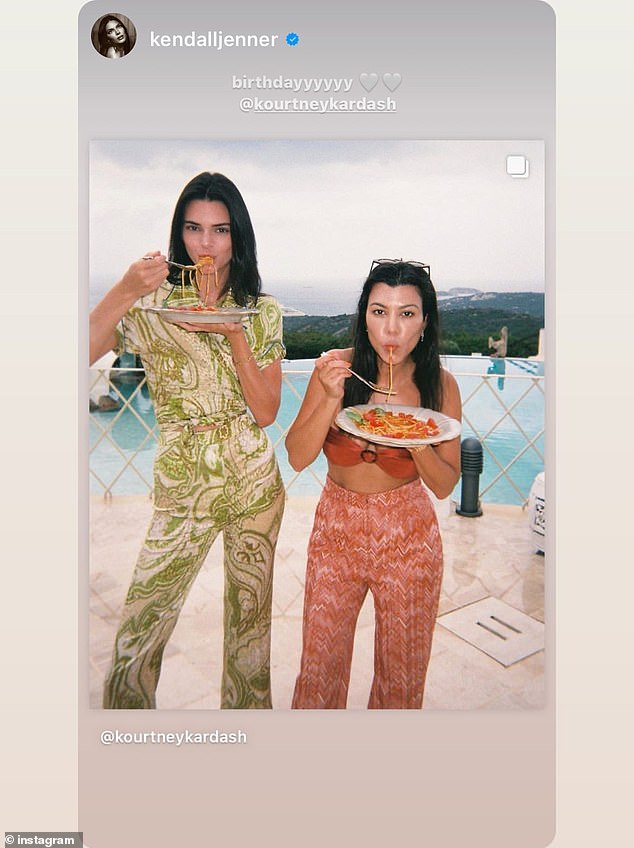 Sibling support: Kendall Jenner posted an image to her Story that showed her enjoying a bit of pasta with her older half-sister

The supermodel added a text graphic to her post that read ‘birthdayyyyy,’ which was accompanied by two gray hearts.

Kourtney went on to share a video to her Story where she showed her 116 million followers a birthday card that Kim had sent.

During the clip, the social media personality pointed out that her sister had written the wrong age on the card, which she seemed to take in stride. 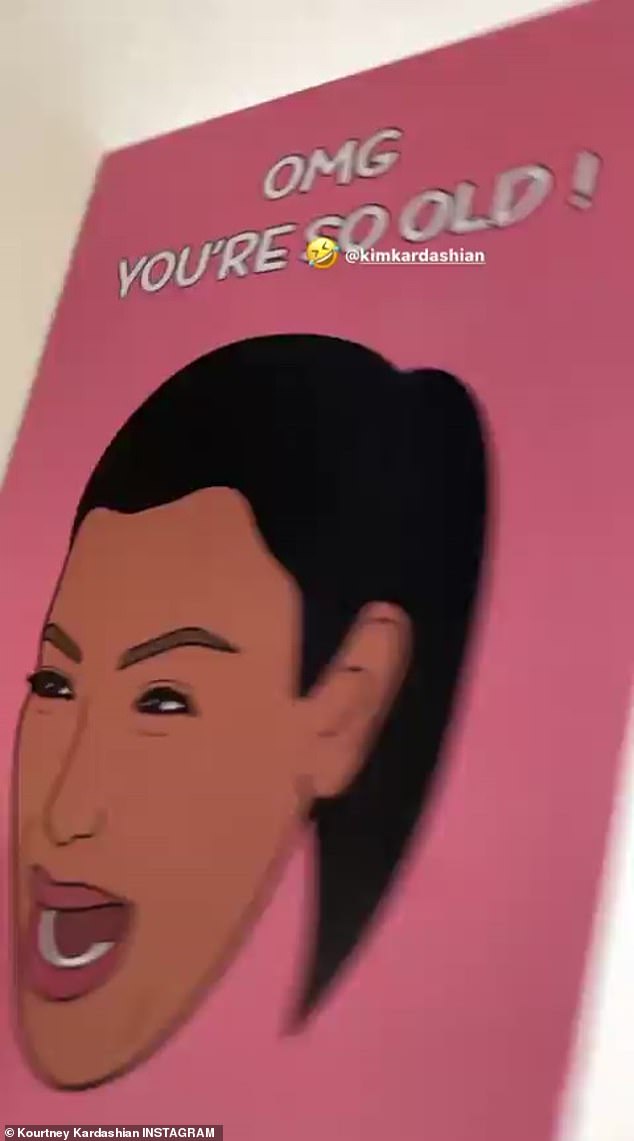 Sending her best wishes: Kourtney later shared a video to her Instagram Story where she showed off a card that Kim had sent her 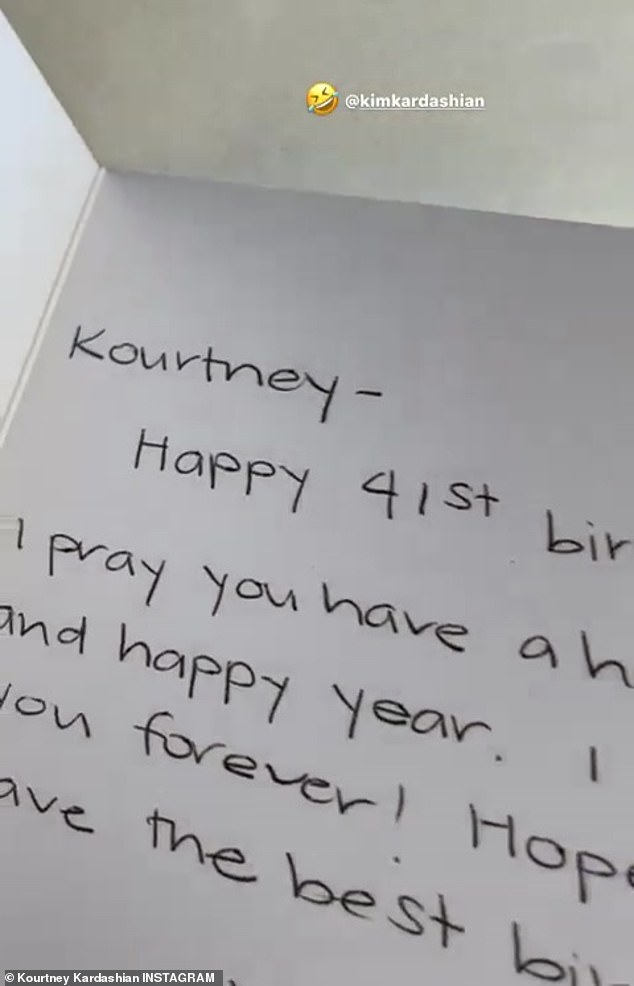 Mistakes happen: The social media personality pointed out that her younger sibling had written the wrong age on the card and concluded that ‘last year didn’t count’