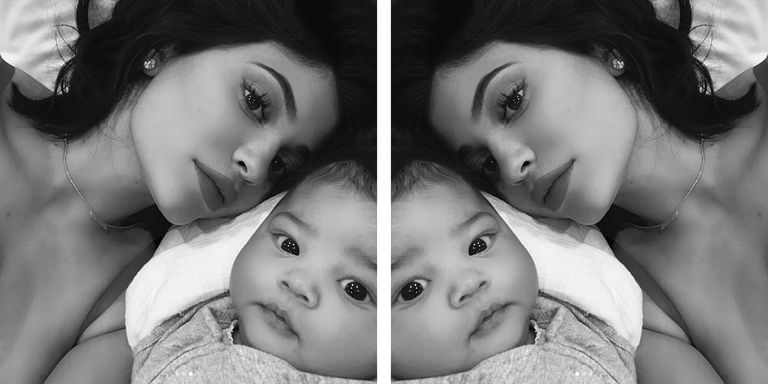 After keeping her pregnancy on the DL for nine months, Kylie Jenner is slowly but surely taking back her throne as an Instagram, Snapchat, social media queen. Only now, post-hiding, it’s even better because she has an adorably chubby-cheeked mini-me to show off on every platform.

Ahead, a running tab of all the mother-daughter selfies, sleeping Snapchats and meet-the-family outtakes we’ve seen of baby Stormi since her birth.

Kylie lounged sans makeup with a giggly Stormi on her chest. Her little smile is too cute!

Kylie shared photos of her and Travis Scott’s sleepy two-month-old, all bundled up in her stroller. Those cheeks!

Jenner and baby daddy Travis Scott spend some quality time with their baby girl on Easter Sunday. Their little girl, who officially turned two months old on this date, looks adorable in her father’s arms.

Plush pink hooded onesies are adorable by nature, but tiny Stormi makes the outfit even cuter, dozing off as Kylie captures her on Snapchat video, captioning the clip: “an angel…” fittingly typed in baby pint font.

Possibly her favorite sleeping ensemble, just a few days prior, Kylie shared a filtered shot of baby Stormi in a deep sleep, sprawled out, dressed in the same pink knit sleepsack.

Though we know Kylie has a very strict visiting policy for Stormi, we have evidence that she has let select close friends and family members meet her daughter. Most recently, Kylie shared an adorable Instagram overhead photo of her daughter being cradled by her great-grandmother (Kylie grandmother, and Kris Jenner’s mother), Mary Jo “M.J.” Houghton. “I mean..does it get any better than this?” Kylie captioned the sweet family moment.

i mean.. does it get any better than this?

And of course, Kylie’s best friend Jordyn Woods got a private intro with Stormi. Kylie shared a short Snapchat video of Woods rocking a sleepy baby Stormi, captioning the clip, “Can they get any cuter?”

Babies need a lot of sleep, and Kylie’s photo depiction of her less than two-month-old daughter shows that Stormi’s no exception. In early March, the mom shared a Snapchat of her baby girl fast asleep, adding some pink heart emojis dancing over her head.

Travis Scott has even gotten in on the baby portrait action, unable to keep his adorable daughter off his Instagram feed. “Our little rager !!!!” the new father wrote next to a straight-on cubby-cheeked snap of little baby Stormi, with emoji flames added for effect.

On Stormi’s one-month birthday, Kylie commemorated the occasion by sharing a full-length mother-daughter shot on Instagram. “My angel baby is one month old today,” the Life of Kylie star wrote next to the comfy cozy outtake where she cradles Stormi in her arms.

Scott also celebrated Stormi’s one month with a close-up Snapchat photo of her sweet little onesie. “My lil mama 1 month today her favorite unit of course,” he captioned the photo.

Jenner fawned over her daughter’s little toes in an adorable video of her tiny baby feet. Kylie’s manicured hand makes a cameo, of course.

Kylie shared the first photo of Stormi on Instagram, showing off her daughter’s tiny hand clasped around her finger. “Stormi webster,” the mom captioned the image, giving fans a first peek at the newborn and also revealing her full name to the world.