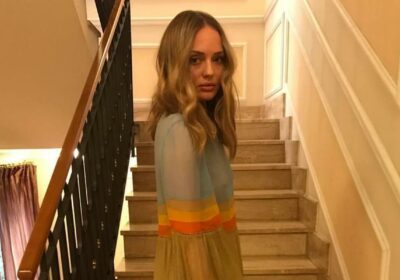 In a new magazine interview, the ‘Transformers: The Last Knight’ actress opens up about a few ‘traumatic’ pregnancy losses she suffered before eventually having kids.

AceShowbiz –Laura Haddock learned to accept that “life wasn’t relentlessly joyful” after she suffered a miscarriage. Opening up about the “traumatic” losses she suffered in various stages of pregnancy before having her kids, the “Recruit” actress – who has Pip, six, and four-year-old Margot with ex-husband Sam Claflin – admitted it was particularly “painful” going through the first trimester on one occasion before losing the baby.

“We’d been trying for a while because I had a few miscarriages,” she told You magazine. “I don’t know if I’d been through anything as traumatic up until that point. They all happened at different times [in the pregnancy]: one was at 13 weeks, so you’ve gone through sickness, exhaustion, scans; you’ve dreamed of [your baby] and planned.”

“It’s really difficult. [My family] knew as soon as I tested positive, so this was loss on quite a big scale; a lot of people are invested in a pregnancy. That was the first time I understood life wasn’t relentlessly joyful.”

“It was incredibly painful, but important for me to go through. It was a sad time but it made me more sure I wanted to be a mum. I’m not the only person to have experienced it. There’s a relief in saying something and it not feeling loaded – and this didn’t.”

The 37-year-old actress is relieved public figures such as Chrissy Teigen, Michelle Obama, and Meghan, Duchess of Sussex, have spoken openly about miscarriage and made the subject less taboo. She said, “I hadn’t had conversations about miscarriage before I had mine; it didn’t seem a real possibility until it happened.”

Laura’s losses made her more cautious in her subsequent pregnancies and it was only after she’d had her four-month scan with Pip that she allowed herself to get excited. She said, “I protected myself moving through the pregnancies, taking each day as it came, not getting too excited…”

“[After the four-month scan] I was on a job being corseted, and I said to the costume designer, ‘Can you not do it too tight?’ She had a twinkle in her eye and said, ‘Oh? Me too!’ We started bouncing around together.”

While the “Downton Abbey: A New Era” star always knew she wanted children, she’s understanding of women who don’t experience the same yearning for kids. She said, “It was what I wanted from a very young age.”

“I’m very maternal, so it’s been incredibly satisfying; there was a real biological pull. But to other women, I say, ‘It’s OK if you don’t feel that pull,’ ” she laughed. “And remember, being pregnant is just one per cent of what you’re entering into.”