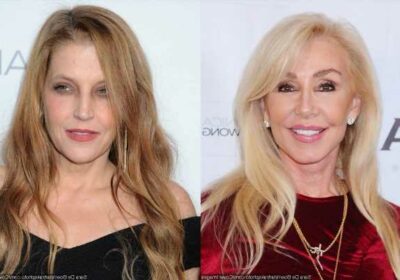 Linda, who dated Lisa Marie’s father Elvis Presley between 1972 and 1976, has confessed in a new interview that she is ‘absolutely devastated and shocked’ by the passing of the singer.

AceShowbiz –Linda Thompson feels “absolutely devastated and shocked” by the death of Lisa Marie Presley. Following the singer’s death on Thursday, January 12, aged 54, after suffering a cardiac arrest, Linda, who dated Lisa Marie’s father Elvis Presley between 1972 and 1976, has confessed to being heartbroken by the news.

She shared, “I was so happy to see her at Graceland to celebrate what would have been Elvis’s 88th birthday, and then, of course, at the Golden Globes. She seemed to be on a more positive trajectory emotionally after the unfathomable loss of her beloved son, Benjamin.”

Linda also revealed that she and Lisa Marie, whose son, Benjamin, committed suicide in 2020, had remained in contact with each other. She told PEOPLE, “Lisa and I kept in touch off and on for all these years – most recently by text. In fact, the very last text to me was a simple ‘Love you Linda’ with a heart emoji.”

Priscilla Presley, Lisa Marie’s mom, announced the death of her daughter, admitting that her family were “devastated” by the news. She said, “It is with a heavy heart that I must share the devastating news that my beautiful daughter Lisa Marie has left us. She was the most passionate strong and loving woman I have ever known. We ask for privacy as we try to deal with this profound loss. Thank you for the love and prayers. At this time there will be no further comment.”

Meanwhile, a rep for the star added, “Priscilla Presley and the Presley family are shocked and devastated by the tragic death of their beloved Lisa Marie. They are profoundly grateful for the support, love and prayers of everyone, and ask for privacy during this very difficult time.”