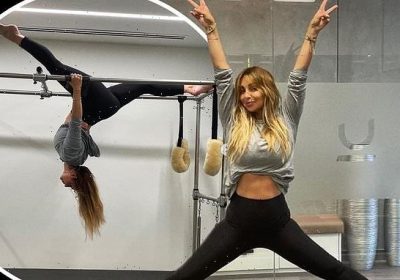 She’s made no secret of her love of Pilates to stay in sizzling shape.

And Louise Redknapp looked sensational as she showed off her impressive flexibility during a class in snaps shared to Instagram on Friday.

The singer, 46, flaunted her taut midriff as she stretched and worked on her strength during the energetic session at U Pilates Studio in Cobham, Surrey. 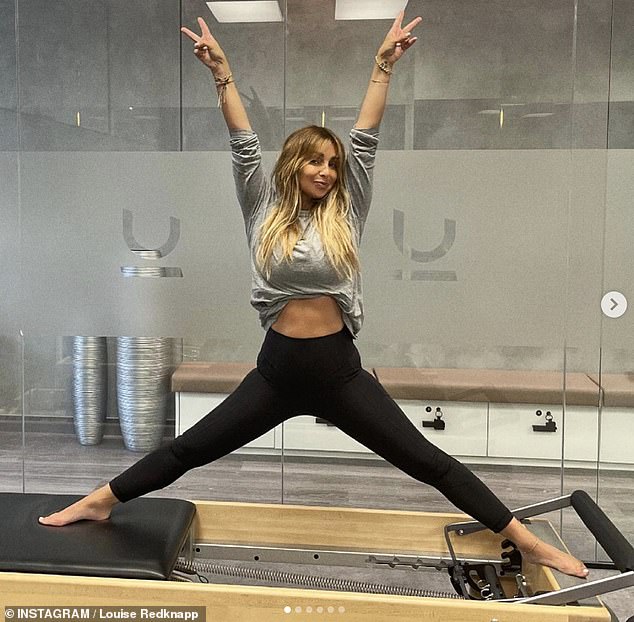 Incredible: Louise Redknapp looked sensational as she showed off her impressive flexibility during a Pilates class in Surrey on Friday, sharing snaps from the session to Instagram

Louise appeared to be in great spirits as she posed on the equipment, stretching her legs out and raising her toned arms into the air to flash her midriff.

The blonde beauty also balanced upside down on a metal frame at the studio and stretched her legs, all while beaming a huge smile.

She ensured to be comfortable while working out, donning black leggings and a long-sleeved light grey T-shirt. 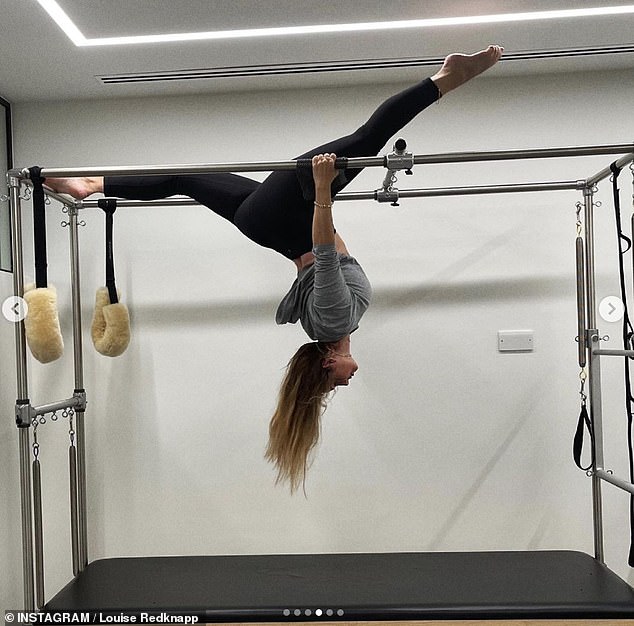 Impressive: The singer, 46, flaunted her taut midriff as she stretched and worked on her strength during the energetic session

Sharing her snaps, Louise penned: ‘I wanna see you STRETCH…

‘After 3 years I went back to Pilates with one of my closest friends @sianmarshallpilates who is an incredible Pilates instructor.

Louise praised Pilates back in May 2017 when she spoke to Women’s Health about her fitness regime. 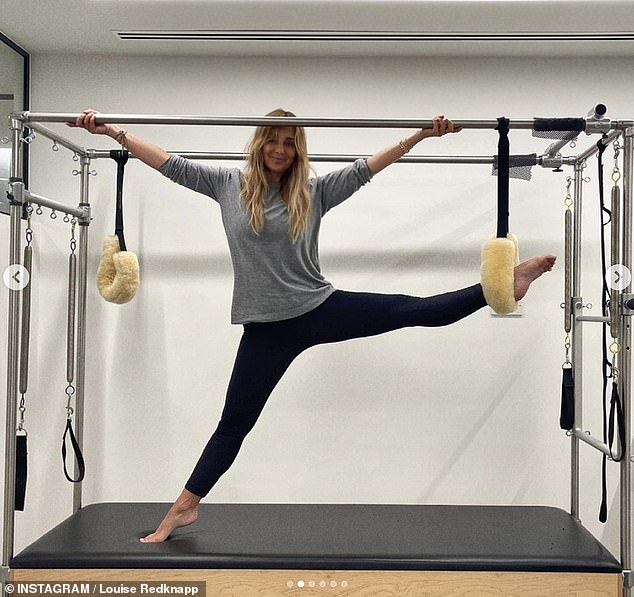 Going for it: Louise appeared to be in great spirits as she stretched her legs on a metal frame 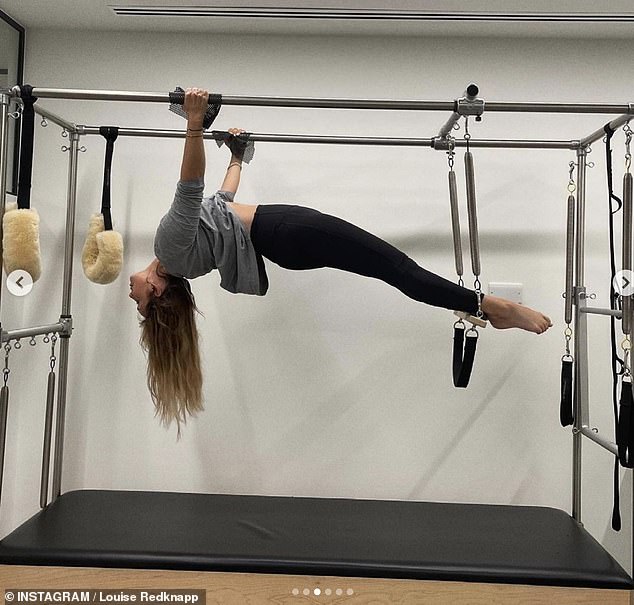 Strong: She looked like a natural during the session and admitted it ‘hurt a bit’ getting back into the swing of things after some time away from the studio

She said: ‘I confess, I’m not really a gym bunny, but I’ll work out three times a week, whether that’s with a trainer in my garden with friends, a HIIT session, or a Pilates class – I’ve been doing that for 10 years.

‘I love reformer Pilates, too. It’s a great way to exercise, tone and lengthen your body. I always do it with friends. Training for me is very social.’

Louise’s return to Pilates comes after it was reported that she had been ‘knocked sideways’ by the news that her ex-husband is expecting a baby with girlfriend Frida.

Sources claimed that Louise, who has two sons with the footballer Jamie Redknapp, 47, has been left shocked by the news but is happy for her ex. 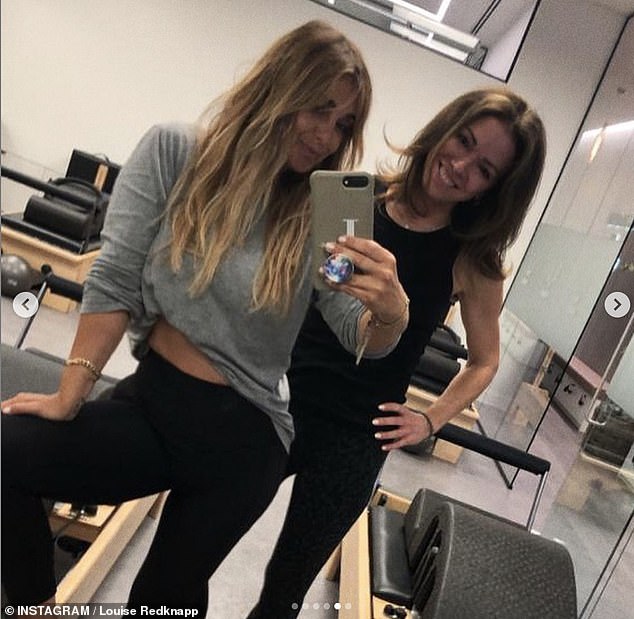 Working out: Louise’s pal Sian was her instructor at the studio, with the women posing for a quick selfie 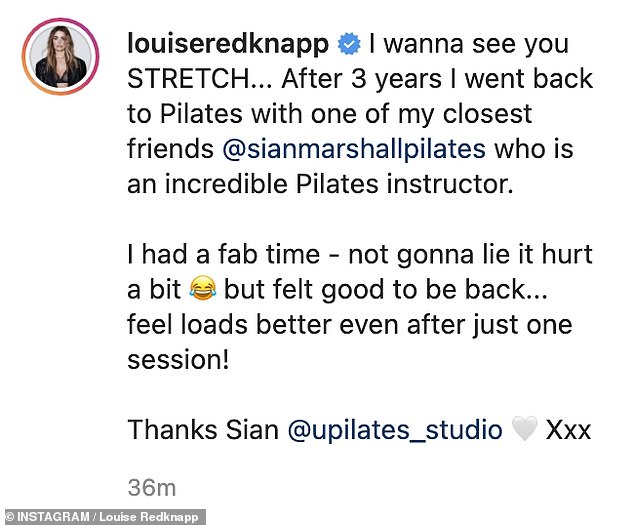 ‘I had a fab time’: Louise said she felt ‘loads better even after just one session’ as she recovered from the exercise which did ‘hurt a bit’ on Friday

Jamie, who split from Louise in 2017, is reportedly set to welcome a baby with his model girlfriend Frida in November, after the pair were first linked back in August.

A source told OK! that Louise is ‘happy’ for her ex-husband Jamie, but was ‘shocked’.

The former couple have continued to co-parent their sons Charley, 16, and Beau, 12, after divorcing three years ago.

The source said: ‘Louise was knocked sideways by the news… She’s happy for them both and says life goes on but at the same time, she’s shocked by how quickly he’s moved on and that he’ll be a new dad again at nearly 50…

‘A new baby is always a joy but she is concerned at how it will impact their family dynamic.’

MailOnline contacted representatives for Louise and Jamie for comment at the time.

Jamie and mum-of-four Frida are yet to publicly announce the pregnancy, however Frida responded to a series of congratulatory messages on Instagram after sharing a picture of one of her sons, confirming the news. 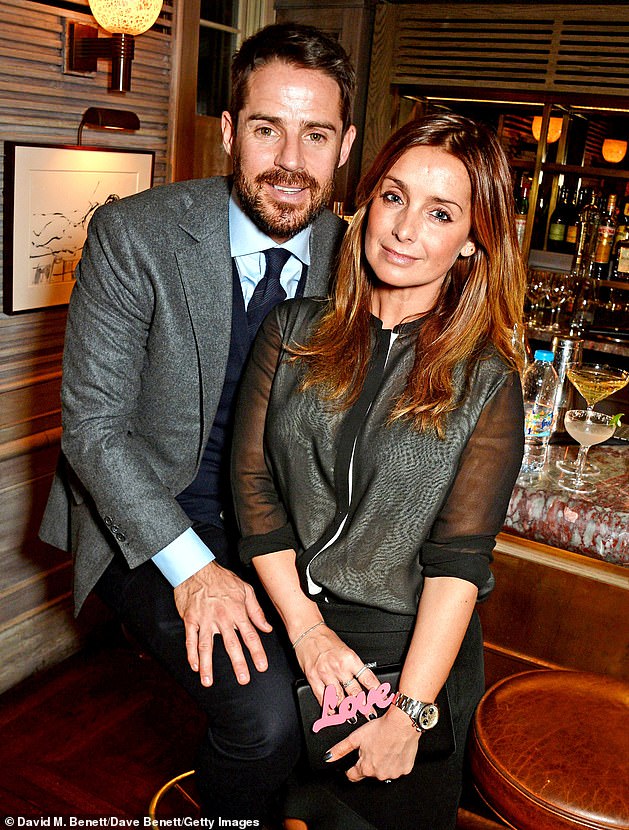