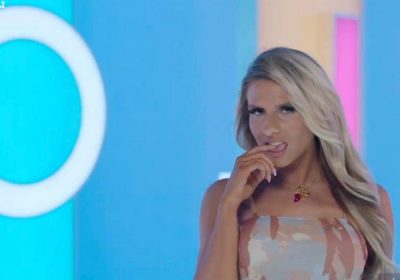 The Love Island newcomer explained all about her past in her opening video for the sizzling new ITV2 series set to explode onto screens at the end of June.

Chloe, 25, is a marketing specialist, and she told viewers she still contacts a former colleague "most weekends".

The controversial admission was not received well by fans of the show, who were angry at her behaviour.

But former stars such as Laura Anderson have offered perspective and suggested watchers should at least “give her a chance” before writing her off.

Dressed in a tropical dress for her launch video, the beautiful blonde shared her love secrets and style for dating, which included being attracted to unavailable men.

“You would really think there were fit men in the city but there really aren’t,” Chloe said. “Most of them are married or have girlfriends so they are 'off limits’.

“They’re not really off limits,” the new star teased with a laugh.

“I mean I’m partial to a married man,” Chloe continued, considering her tastes.

“I did meet someone at work, I thought it was love at first sight, until my manager reminded me of his wife and kids.

“Doesn’t mean I don’t drunk call him most weekends.”

“Any girl should be wary of her man but definitely around me but it's always his fault,” Chloe continued to the VT.

Speaking about her approach in the villa, the business woman wasn’t afraid of admitting loyalty won’t affect how she goes after a potential love match.

“I am not going to make a move on someone who is really invested in his girl.