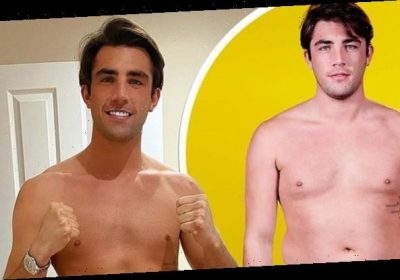 He’s been training hard to get fit in lockdown ahead of his professional boxing debut in 2021.

And Jack Fincham showcased the the results of his gym sessions as he flaunted his slimmed down physique and six pack in a new snap shared to Instagram.

The Love Island winner, 29, looked thinner than ever as he posed in a pair of black shorts while smiling and holding up his fists for the camera. 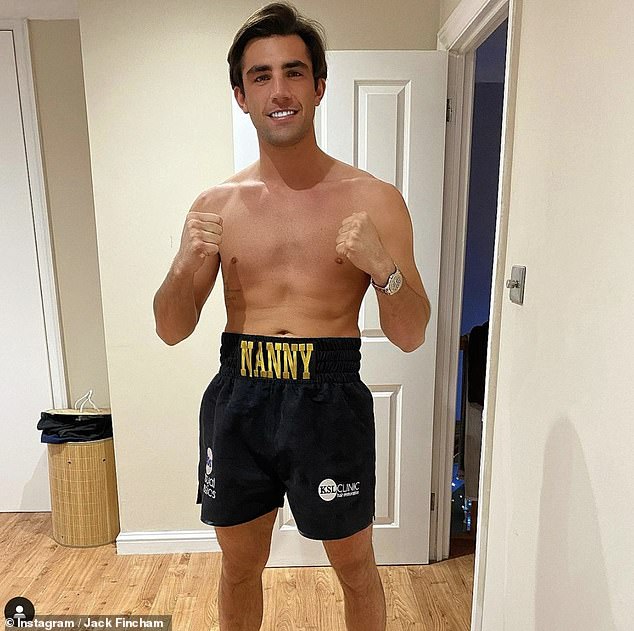 Budding boxer: Jack Fincham showcased the the results of his gym sessions as he flaunted his slimmed down physique and six pack in a new snap shared to Instagram

Jack appeared to be in good spirits as he posed shirtless and showed off his toned frame after spending hours practicing in the boxing ring.

Adding a sweet personal touch to his boxing look, Jack’s belt read ‘Nanny’ in a lovely nod to his beloved grandmother who died last year after a battle with cancer.

He captioned the image: ‘Buzzing to get these bad boys on and cause some damage this year.’

Jack was supposed to make his boxing debut last year but had to pull out after being involved in a car crash and having to get his broken nose reset. 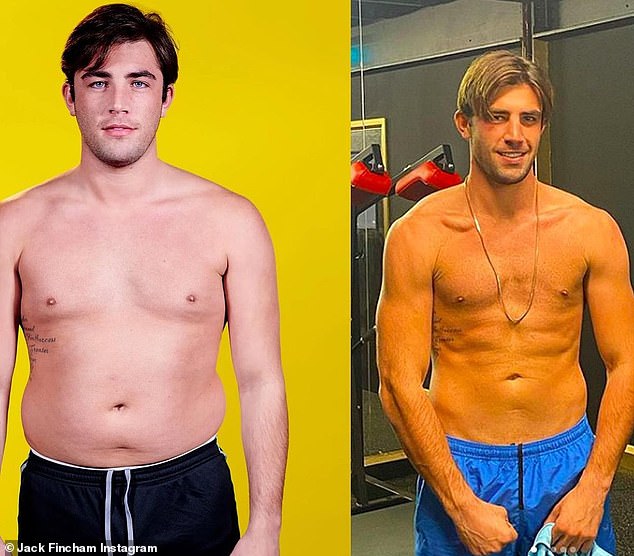 Impressive: The Love Island star, 29, recently revealed his epic weight loss following a health overhaul during lockdown and progression in his boxing career

Since then,Jack has been keeping fans updated on his body transformation and often shares snaps of his workouts to Instagram.

Last month, budding boxer Jack shared two pictures showing a fuller figure in his before shot while tensing to display his new six pack in the after image.

He penned: ‘I’m not even half done’

Jack has got into shape during the COVID-19 pandemic as part of his Team Fincham drive focusing on improving his lifestyle, nutrition and positivity. 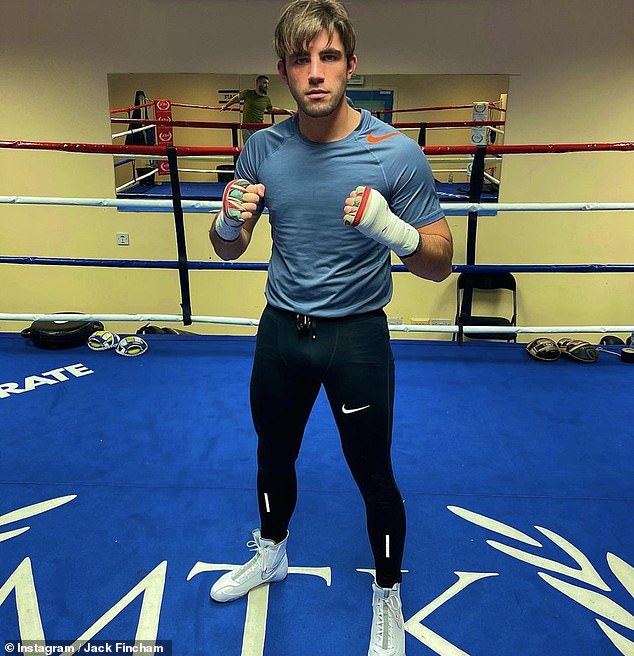 Working out: Jack regularly shares snaps from his workouts and boxing training 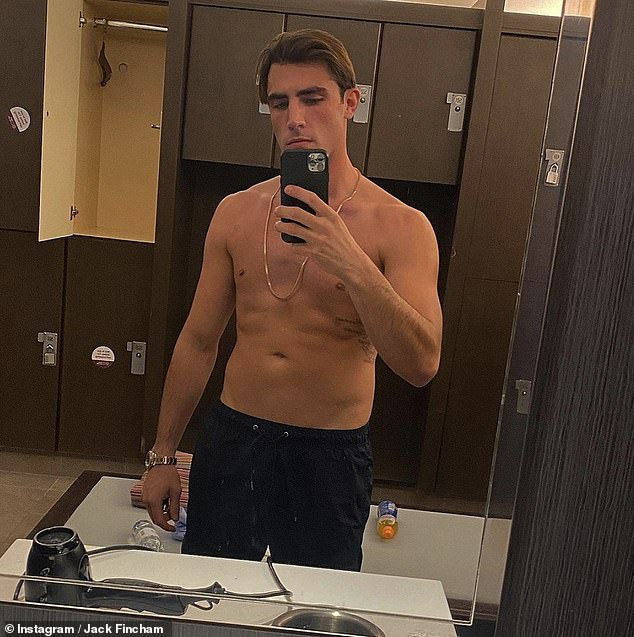 Ripped: He’s got into shape during the COVID-19 pandemic as part of his Team Fincham drive focusing on improving his lifestyle, nutrition and positivity

The star, who recently also spoke about his mental health struggles, then shared a number of videos as he hit the boxing ring in expert style.

Jack previously revealed boxing is his ‘therapy’ and something which helps him focus as he chatted about ‘battling demons every single day’ in a candid video.

As well as reflecting on his own struggles, Jack asked his fans to ‘always be kind’ as they can never know what other people are going through.

Sharing a picture of himself, Jack penned: ‘Only my close friends and family will know that I suffer a lot with my mental health and battle demons every single day of my life, which many of us do. 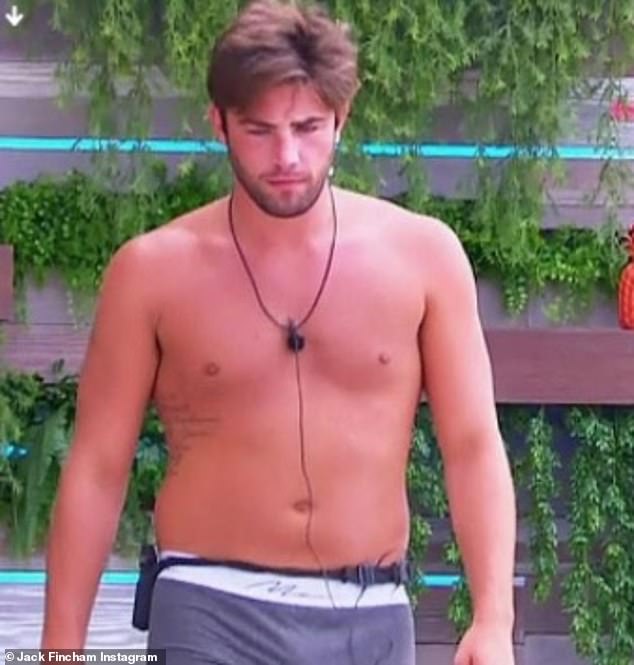 Fuller: He had a fuller frame when starring on Love Island (pictured on the show)

‘I just want you all to know that it WILL get better and life is going to throw stuff at you that you think you can’t get through but you WILL.

‘Things are on the up now and over the last few years living life under a microscope it has taken a massive toll on my mental health, but I’m working away at being the best possible me I can be.’

He continued: ‘Nobody is perfect but such is life, we’re all human at the end of the day so be kind always please. You literally never know what people are going through privately and you never know what can tip them over the edge.

‘Sometimes, from the outside looking in, a confident geeza like myself, you would never believe suffers with mental health privately, but it exists and mental health has no stereotypes. 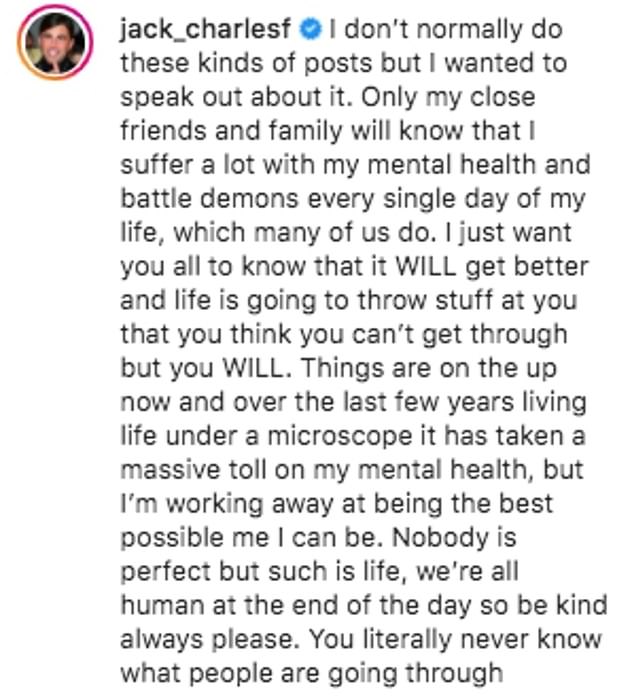 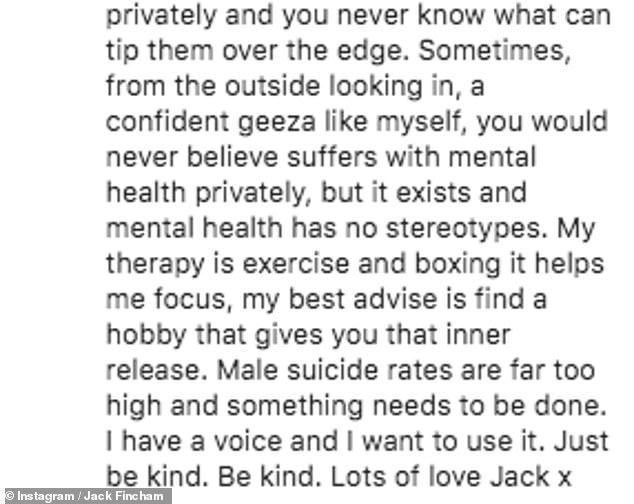 Talking about it: Jack recently encouraged others to ‘be kind’ as he spoke candidly about his own mental health

‘My therapy is exercise and boxing it helps me focus, my best advise is find a hobby that gives you that inner release.

‘Male suicide rates are far too high and something needs to be done. I have a voice and I want to use it. Just be kind. Be kind. Lots of love Jack x’.

Jack has often spoken openly about his mental health and last year discussed how he took antidepressants to help with his ‘bad anxiety’ when he was younger.

He was prescribed medication after being diagnosed with a generalised anxiety disorder which lead to depression.

For confidential support call the Samaritans in the UK on 08457 90 90 90, visit a local Samaritans branch or click here for details.