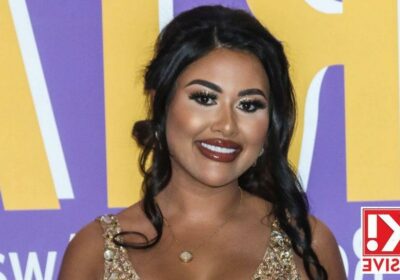 Nikita Jasmine has shared a health update after going under the knife at a private hospital earlier this year.

The 27 year old, who recently branded Chloe Brockett a "lying little witch" as the pair lashed out at each other, opened up on the mystery surgery in an exclusive interview with OK! magazine at the National Reality TV Awards UK 2022.

Arriving at the red carpet with her Married At First Sight pal Jessika Power, who starred in the Australian version of the show, Nikita insisted that she's "absolutely fine" following the procedure.

"I needed it, but I'm fit, I'm well. It was two or three months ago now, but yeah I'm all good," Nikita added.

Nikita looked stunning as she made her way to the awards show on Thursday 28 July as she donned a gold-embellished gown with a scoop neckline and a thigh-high split.

Accessorising with a single watch, a pendant necklace, a gold clutch and a pair of nude heels, Nikita styled her raven-hair down into waves as she smiled for the cameras.

The Celebs Go Dating star last shared a health update back in April when she took to her Instagram stories to share how she was feeling before explaining the worrying side effect that prevented her from being discharged from hospital straight away.

Nikita said she was experiencing low blood pressure, which meant doctors were reluctant to allow her to leave.

Posting a picture of herself on a drip, Nikita wrote: "I'm awake, but very sore and so so tired.

"Can't keep my eyes open. Won't be on my phone much today, but thank you for everyone that's sent me a message. Haven't got the energy to reply, but I see them all."

A few hours later Nikita explained that her blood pressure was low and the doctors were struggling to get it back to normal.

"My blood pressure is really low for some weird reason," she penned. "It never normally is so I'm not allowed to be discharged until it goes up.

"I've drank gallons of water and eaten, but it's not budging atm. Hoping they let me home later."

Luckily, Nikita was up and about soon after and posted a video of herself in her hospital gown. She captioned the clip: "I have risen from the dead. Dizzy as hell, but needed about 553271894 wees."

Nikita has still kept the details surrounding her surgery under wraps. She's spoken candidly about her cosmetic surgery in the past, having undergone three rounds of full body liposuction, two boob jobs and a Brazilian bum lift.