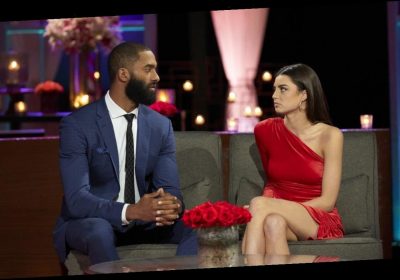 Matt James is opening up about his breakup with Rachael Kirkconnell. On Friday’s episode of The Bill Simmons Podcast, the former Bachelor spoke about his reasons for going on the show and when he knew things had taken a turn for the worse, as well as his decision to split from Rachael and his reaction to host Chris Harrison’s defense of his former flame.

For Matt, becoming the Bachelor was a way for him to be “intentional” with his time, by opting to fully focus on his personal life over his professional one.

While Matt thought the show was an opportunity to focus on getting to know his potential matches without “the glitz and glamour and BS” of normal life, it didn’t turn out that way.

“I don’t think that you could’ve written this. Things, the way that they play out, they happen for a reason. For it to end like this, I would’ve never foreshadowed it,” he said. “I think a lot of it was how naïve I was going into it. I had never been on another dating show, I had never been on TV before, so I was very green. As things start to roll out, life hits you fast.”

One of those things was his relationship with Rachael, who he professed his love for on the finale of The Bachelor, and decided to leave the show with in a committed relationship, though not engaged. On After the Final Rose, though, Matt revealed that he’d broken up with Rachael amid her racism controversy, which came to light in January, when a TikTok user accused the graphic designer of previously bullying her for dating Black men.

Then, another user accused her of liking racist photos. Pics also surfaced of her at an Old South plantation-themed party while in college. Rachael has since apologized and asked people to stop defending her actions.

Matt knew none of this, though, when he was falling in love with Rachael while filming the show last year.

“You don’t have your phone. You don’t have a computer. You’re completely tapped out of what’s going on, which really allows you to foster these relationships with women,” he explained. “In reality, your friends, your family, would have something to say about it. When you get out of that bubble, you’re reintroduced to all these distractions, people’s opinions, and it started to get difficult.”

While rumors of Rachael’s past actions began circulating in January, Matt didn’t pay much attention to things until the first week of February, about two months after the show wrapped filming.

In those months, Matt and Rachael were on an “extended honeymoon” of sorts, where he reveled in “really getting to know each other and finding out things that I like even more about her that I didn’t know during filming.” Then, “everything came to a head” when he could no longer avoid social media speculation.

“You don’t want to think that someone knows your person better than you, so I’m taking everything with a grain of salt. As it’s continuing to roll out, it just hits a head,” he said, adding that Rachael called him to discuss the situation first. “… It continued to come up again, again, and then when it’s addressed formally in the statement that Rachael put out, it’s a devastating blow.”

“It’s heartbreaking because everything is real at that moment,” he added. “It’s no longer rumors. It’s real.”

It became more real when Chris defended Rachael’s past racist actions, encouraging people to offer her “grace,” and speaking out against the “woke police,” during an interview with former Bachelorette Rachel Lindsay. He has since apologized and stepped aside from the franchise for a “period of time.”

“As I watched that interview with Chris and Rachel, I thought I was in an alternate reality. It didn’t even seem real as it’s coming out,” Matt said. “It was sad. It was sad to hear that because I had so many conversations [with him] about how I was feeling, what I was going through in that crazy process that I was in, and it’s hard to imagine that he could really sympathize with what I was feeling.”

“Chris has outlined in his statement that he’s committed to putting in the work, he’s taking a step back, so I respect that. I hope that he does,” he continued. “I don’t think that anybody should be trying to cancel him. We should be calling him in to do that work that he’s outlined he wants to do.”

The situation with Rachael, Matt said, was “tough” because his feelings for her didn’t “go away overnight.” Still, Matt knew they simply couldn’t be together at that point.

Since news of their split became public, Matt has received a slew of racist insults online. In a post to her Instagram Story, Rachael, who still believes her ex is the love of her life, called those posts “repulsive.” Some of the insulting posts directed at Matt urged him to reconcile with Rachael because she didn’t know what she did was wrong at the time. For Matt, though, that became a “frustrating” thing to hear.

“There’s a lot of situations as we’ve seen over the past four years in our country where Black people aren’t given the benefit of the doubt, like Tamir Rice, Trayvon Martin, Breonna Taylor,” Matt said, naming Black people who died after being shot. “There’s no taking that back. As Black people, we’re not afforded that same privilege of not knowing any better. So it’s hard to hear that and have to explain that to people… why that’s problematic.”

“That’s what was kind of frustrating to me because I felt like a lot of that teaching and learning was put on me,” he continued. “… That’s why Black people in all these different situations are exhausted by the emotional labor that goes into having to explain [things to people]. That’s not our job.”

While Matt doesn’t think that Rachael, or anyone for that matter, is irredeemable, he doesn’t see a future relationship working out between them.

“I think that, for Rachael, there’s a lot that we didn’t discuss that we probably should’ve talked about. I probably should’ve asked her more clarifying questions,” he said. “I’m giving her that space to do that. In the meantime, I’m working on myself.”

“I’m not going to be dating. I’m solely focused on getting back to that meaningful work in the community and centering myself around projects that are going to elevate all the work I’ve been doing in the city, special interest things that I appreciate outside reality television,” he continued, adding that, while he doesn’t regret going on the show “at all,” he’d “never” appear on another season.

“[Bachelor in Paradise] is not in my cards,” he added. “That’s in someone else’s cards, all power to them, but, for me, there’s a lot of things I need to focus on outside of reality TV and I’m excited about that.”