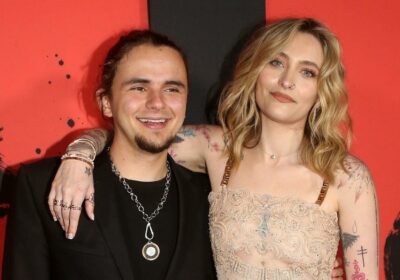 Michael Jackson’s children Paris and Prince have been spotted posing together at a musical about their father.

The siblingswere photographed yesterday, Wednesday 11 May, on the red carpet at MJ the Musical, a Broadway show celebrating Michael’s life and musical work.

Prince, 25, had a large silver necklace and was wearing a black t-shirt and jacket with blue jeans and black shoes.

Meanwhile, his younger sister Paris, 24, looked elegant in her nude-coloured gown which had a glittery design.

The pair were pictured smiling together at The MJ, The Michael Jackson Musical Celebrates the 2021 – 2022 Broadway Season at Tavern on The Green. In another picture Paris was seen giving her brother a friendly peck on the cheek with her arm around him.

The musical show is about Michael’s life and tells the story of how he became a legendary singer famous around the world.

During his life, the singer captivated fans with his songs and dancing, and sold more than 750 million records with hits such as Billie Jean, Beat It and Smooth Criminal.

MJ the Musical has received 10 Tony Award nominations, a ceremony will be held to announce the winners in June.

The event will be held at Radio City Music Hall and be hosted by Academy Award winner and Tony nominee Ariana DeBose, 31.

Prince shared his delight at the nominations and posted an image of the show poster on Instagram to celebrate.

The post was captioned: “Congratulations to @mjthemusical for 10 Tony nominations and congrats to @myles.frost for his nomination for Best Performance by an actor in a leading role in a musical!

“I’m so proud of y’all and it’s truly well earned!”

Michael, who was dubbed the King of Pop, had histwo eldest children Paris and Princewith ex-wife Debbie Rowe, who he was married to between 1996 and 1999.

Prince and Paris were in the spotlight at the Grammys in 2010 when they accepted their father’s Lifetime Achievement Award.

Paris is a model who has had roles in acting and singing, appearing on shows such as the X Factor and The Oprah Winfrey Show.

For updates on all your favourite celebs, sign up to our daily newsletter here.