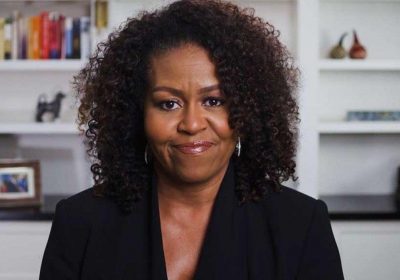 Celebrities and political figures are honoring George Floyd on the one-year anniversary of his death.

It’s been one year since Floyd was murdered in Minneapolis, Minnesota, after former police officer Derek Chauvin held him down by the neck with his knee for more than nine minutes. His death marked the beginning of a nationwide movement and social unrest. Celebrities began speaking out about the Black Lives Matter movement and showing their support in any way that they could.

“It’s been a year since those horrifying 9 minutes and 29 seconds stole George Floyd’s life and shook up so many of us. And it’s easy, after everything that’s happened, to focus primarily on the pain and the grief, the past traumas that came rushing back, the protests, the difficulty of reliving it all during a trial. It’s been a lot—a heavy, exhausting year in so, so many ways,” the former first lady began. “But today, I can’t help but think of this clip of George’s daughter, Gianna. This was not just a national tragedy, but a human one. This little girl lost her father. And every time I watch this video, I see someone who loved her dad, who’s been forced to grow up a lot faster, and who probably had a lot of moments this past year that weren’t quite as joyful as this one.”

Kerry Washington also shared how people can continue to honor Floyd and how the issue of social injustice is a continued effort.

“Black Lives have never NOT mattered. I pray for a world where we all matter to each other all the time and forever more. Can’t stop, wont stop. Justice is not a fad,” she wrote in part. “If you are new to this, happy one year awakening. Stay in the fight. If you are not new to this, sending love. Today and always.”

“A year ago today we didn’t know his name, but now it’s forever etched in our consciousness: George Floyd,” Oprah Winfrey added, alongside a gorgeous drawing.

The Floyd family also met with President Joe Biden at the White House on Tuesday to mark the anniversary, amid continued congressional negotiations over police reform legislation.

It’s been one year since George Floyd was murdered. In that time, George’s family has shown extraordinary courage. Last month’s conviction was a step towards justice – but we cannot stop there.

We face an inflection point. We have to act.

From tragedy
Love must prevail
Our cry
Your tragedy
Demands CHANGE #GeorgeFloyd#BlackLivesMatterpic.twitter.com/SijutZkXU6

One year ago today, George Floyd was murdered. His death catapulted America into necessary accountability.

We’ve made progress. But there is still so much work left to be done. Keep talking, keep sharing, keep listening, keep loving. Never get tired of doing good.

Her daddy changed the world 💔💜🙏🏾 #GeorgeFloydpic.twitter.com/a1PforvFhu

ON TODAY, THE ANNIVERSARY OF THE KILLING OF #GEORGEFLOYD, NYC MAYOR BILL DE BLASIO ALONG WITH COMMUNITY & FAITH LEADERS JOIN ME IN KNEELING FOR 9 MINUTES AND 29 SECONDS. pic.twitter.com/KvIhXWdYxt

Today marks one year since George Floyd’s death. Yes Derek Chauvin was convicted of his murder, but justice has not been served. There is much more work to do. #BlackLivesMatter

A year after the murder of George Floyd, we have done little to stop it from happening again. Please support these organizations and their work to bring equal justice to all. @[email protected]@BlackVisionsMN