Home » Celebrities » *NSYNC Plays 'Never Have I Ever,' Admits One of Them Hooked Up With a Spice Girl

*NSYNC Plays 'Never Have I Ever,' Admits One of Them Hooked Up With a Spice Girl 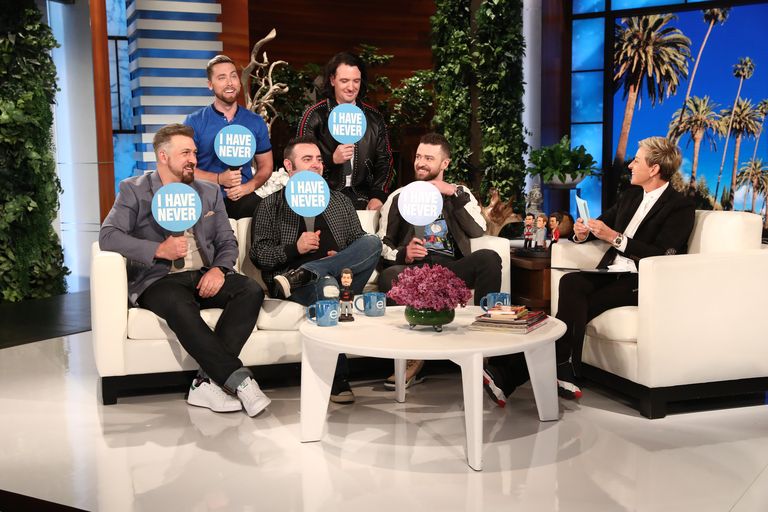 Justin Timberlake stopped by The Ellen DeGeneres Show on Tuesday to talk about his son, Jessica Biel, and all that other fun stuff. That’s very nice for Justin, but the most important part of his appearance was the fact that the rest of *NSYNC, hot off getting a star on the Hollywood Walk of Fame, also showed up. Is your tween heart singing as loudly as mine is?

Ellen, master of embarrassing famous people on television, forced the guys to play a game of Never Have I Ever, and because Ellen knows what the people want, a lot of the questions were about hooking up. She asked if they’d hooked up on a tour bus (they all pretended like they hadn’t, but she immediately clocked them for lying), she asked them if they’d hooked up with fans (they all tried to claim their significant others as “fans”), and she asked them if they’d ever joined the mile-high club.

But most importantly, Ellen asked them if any of them had ever hooked up with a Spice Girl. As those of you who lived through the late ’90s recall, the idea of the Spice Girls and *NSYNC hooking up with each other was the stuff of dreams. Two sets of icons at the height of their powers, together! It boggled the mind. Anyway, all of the guys quickly admitted to having never, except for Justin, who waffled back and forth between saying he had and he hadn’t, which I think means two became one and the two were Justin Timberlake and a Spice Girl.

So which Spice Girl spiced up Justin’s life? Sporty? Scary? Ginger? Baby? Posh? My money’s on Ginger, but I’m biased because she was always my favorite. I also hope this means “Who Do You Think You Are” has secretly been about Justin Timberlake all this time.