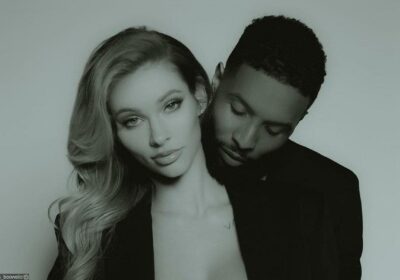 The model, who appeared on ‘Wild ‘N Out’, shows off her bare baby bump in some photos featuring her soon-to-be baby daddy after being hit with pregnancy rumors over a month ago.

AceShowbiz –Odell Beckham Jr. is going to start the new year with a new chapter in his life. The NFL star is expecting his first child with girlfriend Lauren Wood a.k.a. Lolo Wood, who just confirmed the news on Instagram.

Making use of her social media page on Sunday, November 21, the model let out some maternity photos that showed her baring her baby bump. In the monochrome images, she rocked a black top which was left unbuttoned, revealing her lace bra.

She was joined by her soon-to-be baby daddy, who cradled her baby bump from behind, in the pictures. The pair giggled in one of the snaps, which the expectant mom teasingly captioned with, “ilyilyily.”

Odell has not taken to his own Instagram account to share the news, but he responded to Lauren’s post by leaving several black heart emojis. His father Odell Beckham Sr., meanwhile, excitedly commented, “LOVE [a heart emoji] IT‼️WHHHAAAA…”

News of Lauren’s pregnancy first swirled in early October after a picture of the model in the gym surfaced online. In the photo, the 28-year-old beauty seemed to be sporting a round belly.

When an Instagram user who apparently runs a celebrity news blog contacted Lolo via DM for confirmation on the reports, Lauren tried to dodge it at first by blaming the image that suggested she’s having a bun in the oven on “bad angle.”

However, after pressed on it, the “Nick Cannon Presents: Wild ‘n Out” model seemed to admit it as she responded, “Lol girl I appreciate you sending This to me before it was spread. I had it taken down, Pls keep this between us.” When the user wrote back, “I got you lolo. Love you and congratulations to you and O,” she replied, “Thank u for respecting out privacy.”

Nevertheless, a screenshot of the DM conversation was leaked at the time.

The baby will be the first child for both Odell and Lauren, who have been dating since 2019.